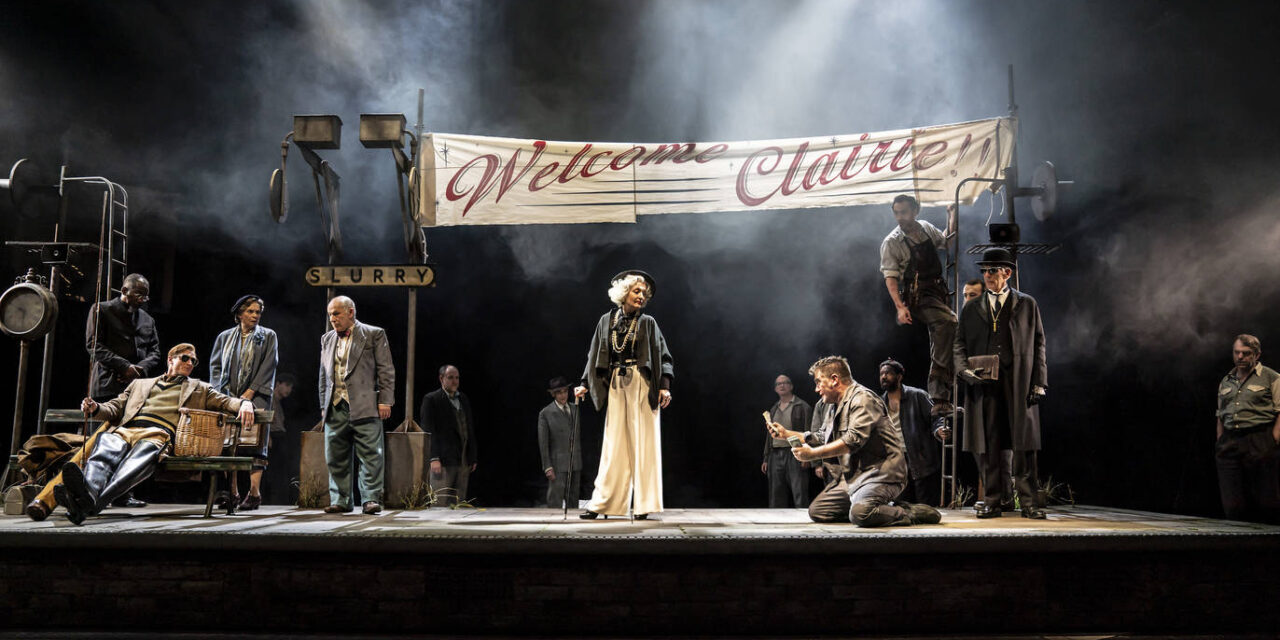 The cast of "The Visit" at the National Theatre. Photo: Johan Persson

Now that’s what I call a star turn. Hitting the brakes on an express train, Lesley Manville lands on the National Theatre’s Olivier stage surrounded by thick smoke, supported by prosthetic legs, and bejeweled with all the money in the world. Her central performance in Tony Kushner’s adaptation of Friedrich Dürrenmatt’s 1956 tragicomedy The Visit not only sparkles in its own right, but saves an overloaded production from turning tedious.

Kushner’s adaptation—The Visit, or The Lady Comes to Call, in its full title—transposes the play’s setting from one fictional locale to another. We are not in Guellen, but in 1956’s Slurry, a poverty-stricken post-recession town in western New York. This is where Manville’s Claire Zachanassian was born and raised, and where she returns 45 years later as the richest woman in the world. Escorted by her seventh husband, a panther, and an assembly of maids and guards, the billionairess comes to Slurry knowing full well that she is the town’s only hope at financial recovery. And generous she proves: she offers them one billion dollars, but on one condition—that they kill Alfred, the man who slandered and abandoned her when she was pregnant with his baby at age 17. It’s not revenge she wants to buy, but justice, and she is ready to wait and see how the townspeople’s initial refusal will wear off.

The wonders of Dürrenmatt’s play stem from its remarkable ability to ask epic questions about justice, greed, and love in a relatively succinct scale. So one can’t help but wonder why Kushner must have felt the need to inflate this compact work with puzzling appendages and elaborations, turning vignettes into full-blown scenes. With its three-and-a-half-hour running time, Jeremy Herrin’s production of this overwritten adaptation dilutes the punchiness of Dürrenmatt’s original. What’s more, it makes the play less strange, less edgy, less haunting.

Dürrenmatt’s eclectic dramaturgy is here replaced by a smoothed-out, nearly conventional flow that just doesn’t feel thrilling enough. While the Americanization of the story makes things slightly more relatable, the staging does not use this to its advantage. Vicki Mortimer’s revolving, expressive set pieces, Paule Constables’s neon-heavy retro lighting, and Moritz Junge’s flashy costumes all play it too safe. They are reluctant to highlight and cultivate the inherent grotesquery of what’s going on in this disturbing tale of festering wounds.

Thankfully, Manville is here to save day. Hers is a majestic performance that embraces and amplifies Claire’s tantalizing complexity. She imbues the part with wit, tenderness, and charm. Even when Kushner’s version weirdly channels T. S. Eliot’s Four Quartets in its frequent pronouncements on time and memory, Manville knows how to take those glib lines and twist them into emphatic moments. “I am or will become a myth,” she declares atop a balcony, her steely body almost defying gravity. Alongside her, Hugo Weaving plays Alfred with comparable command, portraying a man whose initial dismissiveness and incredulity gradually give way to paranoia and mute despair. His hunched silences are as communicative as some of his guttural reactions.

Herrin directs a sizeable and lively group of actors, who tend to give high-pitched and somewhat formulaic performances. Sara Kestelman, though, is outstanding as the high school principal Henrietta, a champion of humanism who tries to speak reason into her former students as they descend into moral evasion. Nicholas Woodeson (as Mayor Nicholas) and Joseph Mydell (as Reverend Ferris) are also engaging as representatives of a society tempted by its own avarice. Aletta Collins’ careful movement direction adds much flair to the play’s communal scenes, particularly in its grim ending.

With their motley embellishments and digressions, Kushner and Herrin appear to have tampered with the precious DNA of Dürrenmatt’s play: The Visit leaves one more dazzled by its lead performances than harrowed by its core of darkness. Of her first departure from Slurry, Claire says: “I left and became hell itself.” If only we could have seen, and felt, more of that hell.

How to Stage an Opera? Summer Munich Opera Festival as a Role Model