Love And Human Remains explores the everlasting questions of human existence–who we are, what we want, where we go. Playwright Brad Fraser is searching for answers in the world that surrounds him, and what he finds is chilling.

He follows the life of seven lonely people whose lives intertwine on many levels. Invisible, trapped in loneliness and in search of love, they barely exist in a Canadian metropolis. While they are trying to find themselves, a series of murders also takes place in the city.

While the story is overburdened with too many sensational elements–serial killer, oversexed characters, aggression–the superb directing comes to the rescue. Chantale Plante links the dots seamlessly and successfully shifts the focus to the real issue. Combining storytelling and dramatic art, she exposes the dark side of human nature. She wisely uses all elements–a very creative and functional set, excellent lightning, purposefully chosen costumes–to tell the story of creatures who are lost in a big city, craving love and attention and who, in search for themselves, mess up their own lives, as well as the lives of others.

David Magladry’s multileveled set and Karl Wagner’s lightning give the perfect platform to her storytelling technique. Actors standing at different heights on multiple levels of the set, enveloped in half-darkness, drop just one word, here and there, in the midst of various scenes. This doubles the intensity and adds to a change of a dynamic.

The characters in the play seem to be simple, but underneath the surface, each of them hides a troubled soul that fights its own demons. It is the actors’ task to give them a life and a distinguished color. Not easy a task, but very successfully accomplished. Bradley Sykes gives the dark-humored cynic David many layers–he transforms from carefree to nihilist to a crashed, deeply unhappy man. Victoria Luloff has, probably, the most difficult role, but she is ready for the challenge and makes her Candy a plausible, confused girl in a modern age. Sébastien Dijkstra’s Bernie is eerie and viciously aggressive. Alex Henkelman steadily builds the character of teenager Kane, using even nudity scenes to add more traits to him. Axandre Lemours’ as Robert balances the chaotic world around him. Kirby Naftel’s Jerri is aggressively needy, and Joanna McDougall as clairvoyant prostitute Benita connects them all in a tightly woven unity.

Although Fraser’s story has some relevance in our century in the sense that it is true that as time moves, people feel more and more alienated, lost and confused. But with time, culture also shifts. So, the question remains- how to keep the best elements of the play, while giving it a contemporary feel. Today, too many scenes of nudity and/or sexual acts can only do damage to the serious drama, especially given the fact that murder as a response to the repressed sexuality became a cliché a long time ago. Those shocking novelty of the last quarter of the twentieth century are just yesterday’s taboo, and as such, they have their place in the play only if they can add value. In Love And Human Remains, only two or three of them do, while others exist, like the numerous fights in Shakespeare’s dramas, purely for commercial reasons–it is known that violence and obscenity attract the audience, so box office flourishes.

Still, thanks to the true team effort and superb execution, Love And Human Remains is a treat for theatre lovers.

Love and Human Remains plays at The Gladstone Theatre, March 6-16, 2019

This article appeared in Capital Critics’ Circle on March 10, 2019, and has been reposted with permission. 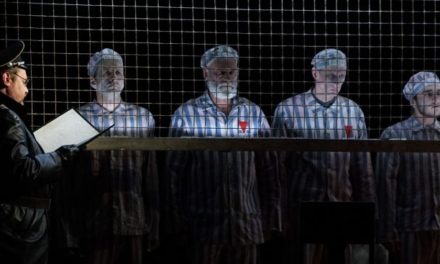