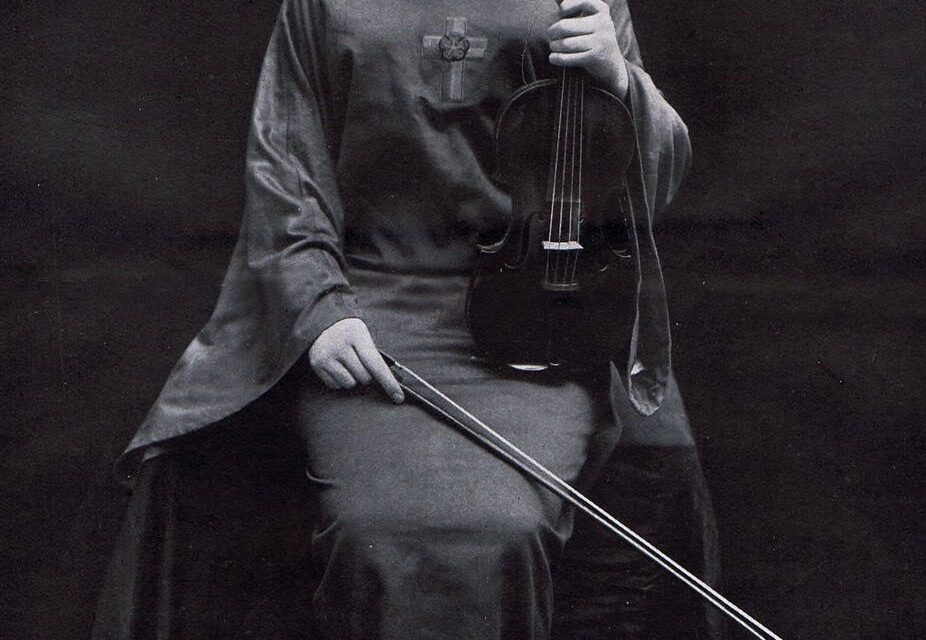 Leila Waddell performing during "The Rites of Eleusis." Photo from original article.

Leila Waddell (1880-1932) was a country girl from Bathurst, NSW, who entered the world stage as an acclaimed violinist – and left it having influenced magical practice into the 21st century.

Her early life focused on music. She studied violin and joined the Sydney music scene, teaching genteel girls at some of Sydney’s most prestigious schools. Her concert performances earned her a devoted following. She favored composers such as Wieniawski and Vieuxtemps, and soon gained a reputation as one of Australia’s leading violinists.

Waddell left Australia as part of a touring orchestra in 1908 and found herself in London. Here she was introduced to New Zealand author (and cellist) Katherine Mansfield at a concert. They became firm friends and regulars in a Bohemian society centered around the Cafe Royal.

As well as musicians, poets and artists, the cafe attracted members of London’s magical orders. It was likely here that Wadell first met the magician Aleister Crowley, who liked to distribute samples of the hallucinogenic drug peyote at parties. The meeting opened the door to another world.

Within a short time, Waddell and Crowley became lovers. Waddell began studying magic as part of Crowley’s order, the A .‘.A .’. (Astrum Argentum), in which she was known as Sister Agatha. Crowley, however, called her Laylah, his Scarlet Woman. In his magical universe, the role of the Scarlet Woman was a sort of anti-Virgin Mary who transgressed the boundaries of feminine virtue by wallowing in excess. 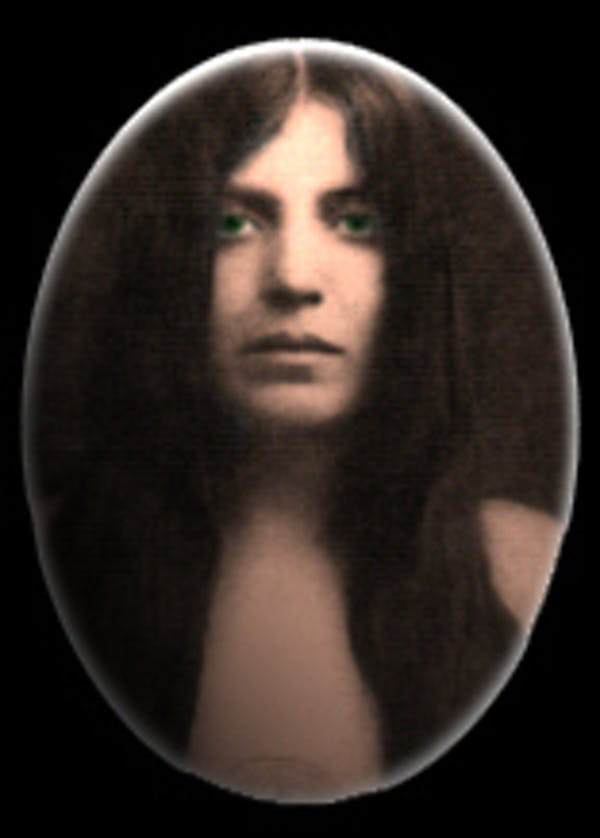 Leila Waddell on the cover of Crowley’s The Book of Lies. Photo from the original article.

Waddell is often relegated to a character in Crowley’s life. But if we assess her life on its own terms, we see a brilliant musician, a philosopher of magic, and a rebel who was unafraid to take risks and be true to herself.

Crowley was experimenting with using sex in rituals. He was interested in how heightened emotions could be harnessed for magical outcomes, such as achieving transcendental states or summoning otherworldly beings.

The moment of orgasm, he believed, focused the magician’s will and increased their power. As a poet and playwright, Crowley was also exploring rituals as theatrical performances, where the audience were co-practitioners.

Waddell’s extensive experience as a performer was a key part of bringing this idea to fruition. The result was The Rites of Eleusis: musical theatre redefining magic for the new era of modernism

The Rites had seven parts, each associated with a planet or celestial body. Waddell composed original music for them, as well as drawing on her favorite composers. The purpose was to enable the audience to attain spiritual ecstasy.

Once again the figure took the violin, and played […] so beautifully, so gracefully, and with such intense feeling, that in very deed most of us experienced that Ecstasy which Crowley so earnestly seeks.

In October 1910, The Rites were ready for the public. The venue was Caxton Hall in London. The audience was encouraged to dress in the appropriate color for each Rite, such as violet for Jupiter, russet for Mars.

Waddell played her violin, Crowley’s disciple Victor Neuburg danced, and Crowley intoned his turgid paeans to the god Pan. The hall was in semi-darkness. The performances were filled with sexual symbolism, but no sex magic took place on stage.

The critics were not very kind to the public Rites of Eleusis’, but most agreed Waddell’s virtuosity was a highlight.

The Great Beast and the Scarlet Woman had a prolific creative life. Both contributed to The Equinox, a publication devoted to Crowley’s circle. Other contributors included Katherine Mansfield, Katherine Susannah Pritchard, and the Irish writer Frank Harris.

After The Rites of Eleusis, Crowley embarked on writing a book that many consider his most significant work. Magick: Liber ABA, Book 4 was a collaborative effort between Crowley, A.‘.A.’. member Mary Desti, and Waddell. In Part III, they reflected on the lessons learned from The Rites of Eleusis.

They concluded that an audience of initiates would more effectively channel magical power than the general public. As for the music, it should be composed specifically for the ritual – indicating that Waddell’s own compositions had hit the mark. The book was published in The Equinox in 1912.

Waddell booked a concert tour to the US. She had planned to buy her passage on the ill-fated Titanic but just missed out on a ticket. Her narrow escape was widely reported in Australian newspapers. After completing this engagement, she returned to Europe to tour with the Ragged Ragtime Girls, a violin group managed by Crowley. She continued her magical studies in the Ordo Templi Orientis, an order with a strong focus on sex magic.

The First World War interrupted the idyll of sex, magic, and music. Ireland was under British rule, and many Irish nationalists saw the war as an opportunity to fight for independence. As the daughter of Irish famine refugees, Waddell was sympathetic. In New York, she joined a secret revolutionary group under the name of “L. Bathurst”.

Crowley arrived in New York in 1914, purportedly on a mission to discredit Germany by spreading absurd propaganda. This was the impetus for an extraordinary stunt.

At dawn on the morning of 3 July 1915, Waddell, Crowley and a party of Irish revolutionaries sailed down the Hudson River to the Statue of Liberty, with the intention of declaring Irish independence and war on England.

But the guards wouldn’t let them land. Crowley made an impassioned speech, which no-one could hear from the prow of the boat, then tore up his passport and threw it in the river. Waddell played the rebel anthem The Wearing of the Green to accompany the Declaration of Independence.

The following year the Easter Rising, an armed rebellion that aimed to overthrow English rule in Ireland, was brutally suppressed in Dublin. 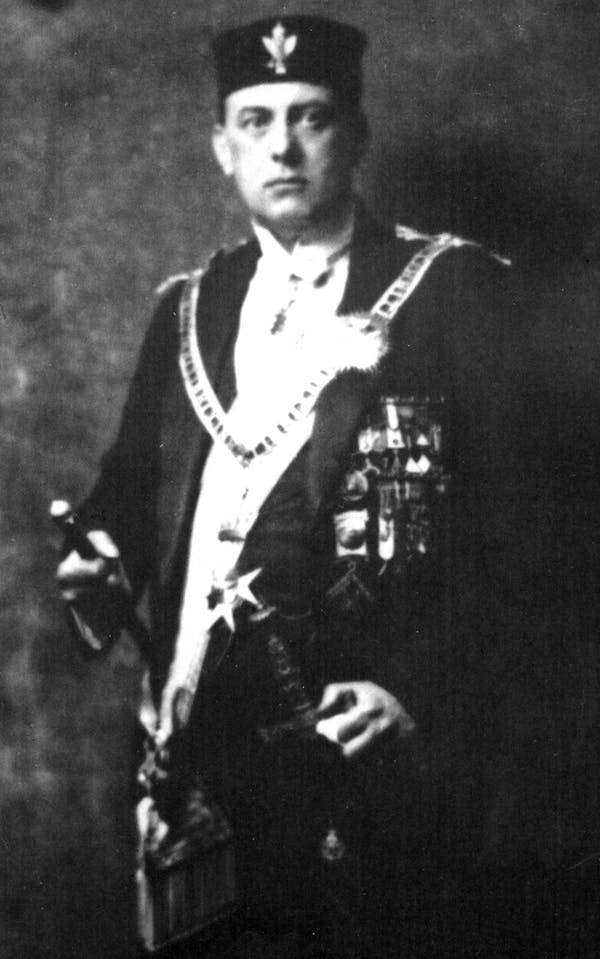 Aleister Crowley in the garments of the Ordo Templi Orientis in 1916. Photo from the original article.

Crowley left New York for the West Coast, while Waddell continued to tour, write and socialize. She was friends with writers like Rebecca West and Theodore Dreiser, and regularly attended salons held by Frank Harris, who had not yet attained notoriety as the author of the sexually explicit My Life and Loves.

While touring US cities, she played lunchtime concerts in factories, organized by the YMCA. The venues were barns, sheds, and gardens, and the audiences were mostly male migrant workers. The men sang along with the arias and would give her wildflower posies. She loved this experience and considered it the greatest work of her career.

Already a seasoned writer, Waddell came to wider notice with her memoir of Katherine Mansfield, who died in 1923. Details are murky, but it seems this led to contracts for a novel and a book of short stories with a London publisher. Crowley, meanwhile, had set up a magical Abbey in Sicily with his new Scarlet Woman. It was time to move on.

Return to the Antipodes

In 1924 Waddell returned to Australia as her father was very ill. The prodigal violinist was greeted enthusiastically, and quickly became immersed in concerts, touring, and radio appearances. She resumed her earlier career teaching violin to affluent schoolgirls. If Sydney society remembered her association with Crowley, dubbed “the wickedest man in the world” by the press, it did not dim their eagerness for her music.

However, soon she became ill herself from uterine cancer. Her books were never finished. She died in 1932 and was buried next to her parents in Sydney.

The Rites of Eleusis are still performed today by Crowleyites across the world, including the Ordo Templi Orientis in Australia. In 2015, Wadell was celebrated as one of Bathurst’s favorite daughters at the town’s 200th anniversary. From country to city to world and other-world, her life was truly a magical journey. 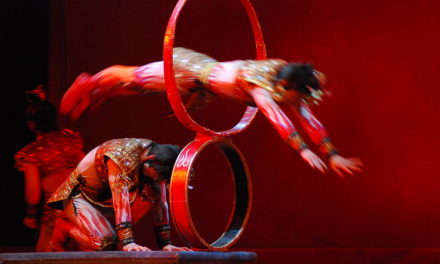 Dispelling The Myths Of Circus 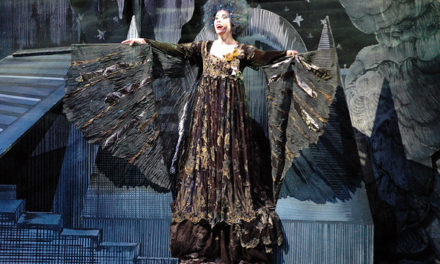