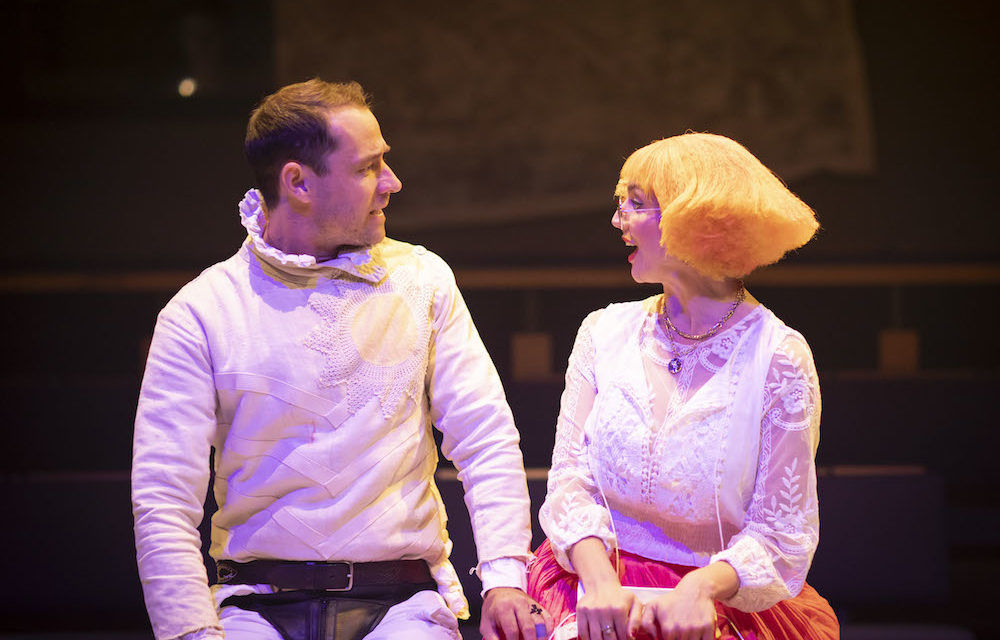 English-born and Scottish-based playwright Jo Clifford has been an astonishingly energetic and creative writer for more than three decades. At the age of 55, John as she then was, began the process of transition—following the death of his wife Susie—and is now, in her own words as reported by theatre critic Joyce McMillan in the programme to this show, both a father and a grandmother. This revival of Clifford’s Losing Venice, which was an enormous hit at the Traverse Theatre during the 1985 Edinburgh Festival, reminds us of her uniquely elegant, subtle and strongly metaphorical theatre sensibility. It’s one of those rediscoveries that has moments when it’s a real treat to watch, even if it is more of a curiosity than a mind-blowing masterpiece.

Blending a fascination with Spanish Golden Age drama with an acutely critical attitude to the delusions of the British state in the years after the Falklands War, Losing Venice is set in Spain and Italy in the first part of the 17th century, taking in the controversial Conspiracy of the Spaniards against the Venetian Republic of 1618. The story focuses on a Spanish Duke, based on the gloriously named Pedro Téllez-Girón Third Duke of Osuna, a selfish and arrogant braggart who gets married to his less than completely enthusiastic Duchess. Finding that she cannot stand him, he responds—after an interview with the King, a stinking mountain of physical corruption—by embarking on an invasion of Venice, determined to achieve military glory and to expand his country’s Empire.

Early on, the faintly farcical and casually surreal nature of the story is highlighted by the Duke’s relationship with the court poet, Francisco de Quevedo y Villegas, a bespectacled mixture of political fixer and frustrated penman. He has to come up with instant rhymes to suit his master’s every whim. More light relief is provided by the down-to-earth servants Pablo and Maria, while the expedition to Venice in the second half of this short and sprightly 100-minute play involves comic pirates, gothic conspirators, and nuns, priests and plots. One scene features the powerful Doge of Venice and his wife, here imagined as a pair of northern pensioners desperate to take off their elaborate robes and put their feet up while chatting nostalgically about the food of the past: “You don’t get beans like that anymore.”

Losing Venice is well crafted, gently allusive, and pulsing with warm humanity, being self-satirizing as well as critical of the structures of power, whether personal or political. In the Brexit era, the delusions of the powerful and the comedy of the powerless have a renewed resonance, but Clifford’s elegant and clever writing cannot be easily conscripted to make any obvious points about the state of the nation. When she talks about the Spanish Empire and especially its illusion that it can be great again, the joke is as much on the brutalizing masculinity of the leaders as it is on another nation nearer home, which once lost its Empire and failed to find a new role. Yet all this makes Clifford’s play sound much more serious than it actually is: the piece’s tone is quietly humorous and softly silly.

It’s a very difficult sensibility to put on stage, and to say that Paul Miller’s production is not one hundred percent successful is not to deny that it is still very pleasurable, and challenging in terms of its ideas (what exactly is Clifford saying about men, women, and war?). Designer Jess Curtis combines a post-punk 1980s style (skinny torn jeans) with suggestions of the classic costumes of the Spanish Golden Age (ruffs, codpieces, and gowns) so the cast looks great on the bare stage, which has a mere handful of props. Tim Delap commands the space vigorously as the aggressive Duke, a parody of male impotence finding its release in warfare, while Christopher Logan’s Quevedo conveys the strains and craziness of arty poets everywhere. Especially good are Florence Roberts (the feminist Duchess and a priest), Eleanor Fanyinka (sensible Maria and Mrs. Doge) and David Verrey (King and Mr. Doge). Last but by no means least, Remus Brooks plays the servant Pablo. If this big-hearted romp never quite delivers much intellectual illumination, it still has plenty of passages of fable-like fun.

Losing Venice is at the Orange Tree Theatre until October 20.

This article first appeared in Aleks Sierz on September 20, 2018, and has been reposted with permission. 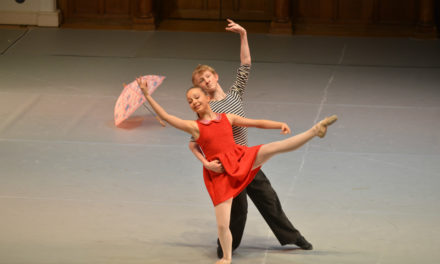 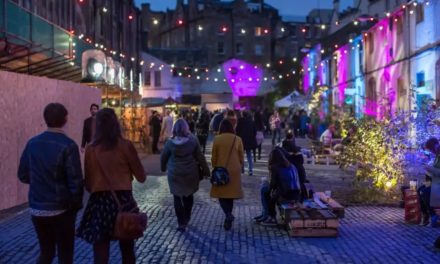