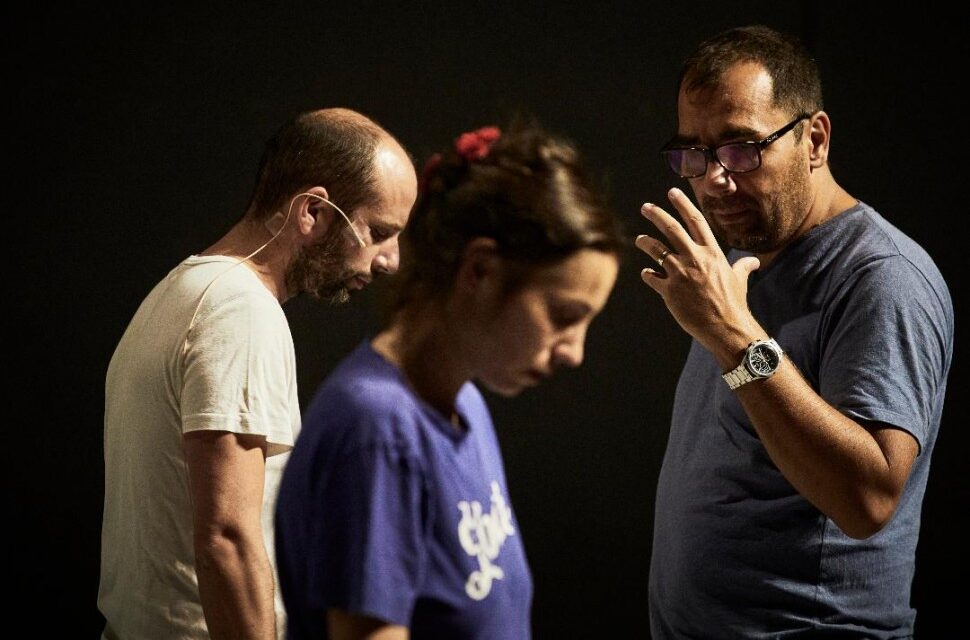 Paul Desveaux is the director of Compagnie L’Héliotrope. In the United States, he recently staged Pollock, written by Fabrice Melquiot, with two American actors. The production, which was well-received by both the public and the critics, was to be presented at La Manufacture, Avignon OFF festival in July 2020; however,  due to the pandemic, it has been postponed until 2021 along with his other projects. In France, some cultural activities are now resuming and Paul spoke with us about the reorganization of his next projects in this context, while the pandemic is still present.

Paul Desveaux is also the co-director, with Tatiana Breidi, of the Studio ESCA – Ecole Supérieure de Comédiens en Alternance (Graduate School of actors in alternation) based in Asnières, near Paris. The school is based on a system of alternation between training and working professionally, and is well recognized for its quality and originality.

French Cultural Services (FCS):  With the pandemic, all the live projects from the performing arts field have been postponed. This summer, some activities have resumed in France following certain safety measures.  Could you tell us about this time of transition and adaptation for your company? What is the impact of this brutal stop on your work, on your creative approach, and on your team?

Paul: First, it took us a certain time to understand this unprecedented situation. During the first phase of confinement, we hoped–I hoped–that it would not last more than one month, which would have allowed us to keep on working on the creation of Series with the Regional Orchestra of Normandy, and to present Pollock with an American cast at La Manufacture in Avignon this July. However, time went by and all the projects were canceled one after the other. This was difficult for the performing arts field…difficulties not to be compared with the health workers and the situation they faced. They deserve all our respect and more.

Theater in France represents many jobs, a social network, and a space for reflection and imagination; for all these reasons it is an essential element of our societies.

We had to re-organize our schedules again. The next season runs from September 2020 to June 2021, i.e. only 10 months, so the dates of production clashed between each other. The impact of the pandemic will stretch on into the next two seasons at least.

While the pandemic is still here, our next creation will be Diane Self Portrait, the last opus of the American trilogy developed with the author Fabrice Melquiot. It happens that the theatrical format of this play is based on a physical distancing between the characters. Visual references play an essential role in the text and I use photographic and video materials in the staging. I had to adapt some parts like the interactions with the audience (in my first staging, I had the audience coming on the stage for a photo) or between the actors (for example, actors hugging or kissing), but overall it is possible without altering the artistic content, without betraying our ideas. If I had to stage Lulu, this fall, another production of the company, I would have been very unhappy because I would not have been able to adapt it.

And for the next projects to come, I don’t know. It becomes clearer one production after the other. A week ago, we rehearsed Séries with the Orchestre de Normandie, a sort of stand-up/solo show with a music sextet; in this production, I am acting, standing in front of the audience, the sextet behind me; there is no interaction with other actors, so it is different than a collective work with many actors on the stage interacting between each other. For the production Pollock, the presenter in Avignon, La Manufacture, has been fair, and they will re-present the production in 2021 during the Festival.

French Cultural Services (FCS): During the months when the pandemic was at its peak, we saw many creative digital propositions. Is there a place for the digital in your next projects?

Paul: This question compels me to respond in two parts:  on one hand, there is the use of [new] technology integrated into the creation of theater, and on the other hand, there are technological modifications related to the distribution of live performances, which occurred during the peak of the COVID crisis.

For my part, and to respond to the first part of the question, I am never against new tools that allow us to dig deeper into the narrative and the poetic on a theater stage. I have worked with and manipulated images since 2002, when we created the work based on Jack Kerouac’s text “Good Blond and others,” and with the sound environments since 2001, when we did Frank Wedekind’s “L’éveil du printemps,” for which Vincent Artaud and Arnaud Rebotini composed the music. I am interested by digital material when it gives new meaning or pushes the experience of the representation further because images and sound move the audience and the performers in particular conditions of time and space.

Incidentally, there is an important element involving sound and image in our next production Diane Self Portrait, focused on the photographer Diane Arbus.

I find it fascinating when the digital advances the history of theater; however, digital tools can never make up for the subject or the writing of a performance, because, for me, at the center of theater there is an element of humanity: the actor, and the language. However, I often dream of virtual reality, and working with motion control cameras on stage.

Which brings us to the discussion of digital tools used for the distribution of live performance. The COVID crisis set in motion an avalanche of propositions: from recording performances to the creation of forms [of performance] based on the conferencing platform Zoom.

As for the first case, the distribution of theater on TV, or on a computer screen, bores me. I’m reminded of how Patrice Chéreau was incredibly reluctant to record his shows. As for the other proposals, they are all well and good, but what they discuss is no longer theater. It is a video-object that is without a doubt interesting and deserves to be developed further, but that does not include the conditions that are necessary for a live performance: namely a room in which actors and audience members interact with one another.

If the performance must be distributed by digital technology, it is already something different. It is already a certain type of cinema, like Louis Malle’s “Vanya 42ème rue.” It tends towards cinematic art, or an art form in the making. And in this case, we should transform the sign that demarks it as “theatrical” into one that says “cinematic,” so that the experience is completely exciting.

In fact, digital technology does not save us. It helps us at times, allows us to complete certain tasks, opens imaginary windows into the world for us, but can never, in any case, substitute for the happiness of being in a theater.

French Cultural Services (FCS): As co-director of Studio-ESCA, could you describe the programs that will be launched this September? Who will be the invited authors? Also, you have the desire to develop some exchange between a similar school in the United States, a conservatory: could you tell us more about that?

Paul: First of all, I would like to mention that Studio-ESCA is the first graduate school for which the education is based on alternating training and professional work. So each year the programs are huge with several modules: first an internship with several directors and actors such as Jean-Louis Benoit, Christine Letailleur, Bruno Bouzaguet, Aurélie Van den Daele, etc., and also with the street theater company Opposito. During these internships, the students will discover authors such as Neil Simon, Naomi Wallace, and Heiner Muller.

In parallel, the students will be hired by companies and directors such as the emerging author and director Faustine Nogues for the production of Surprise Parti, a play for which she received many French awards (Artcena, Beaumarchais…), or by Joris Lacoste and his ensemble who will be performing at Theatre de Genevilliers (Paris Suburbs), as well as by Simon Abkarian for the tour of his latest production, Electre des bas-fonds.

They are also asked to organize a series of staged readings of contemporary authors that stretch along the entire season. And they are invited to develop their own creation, a Carte Blanche program. This season, we are looking forward to the first tries by trainees Ambre Dubruelle with Je voudrais crever by Marc-Antoine Cyr, Juliette Malfray with Projet Millie, and a contemporary adaptation of Frankenstein by Mary Shelley by Pier-Niccolo Sassetti.

In addition, they have weekly dance and singing classes

Regarding the exchange with a U.S. based school, the idea came during my trips and creations developed abroad. I learned so much being in contact with artists from Brazil, Argentina, the United States, and Switzerland that it was obvious for me that such encounters should take place during the education of future theater-makers. This is the main reason I want to develop exchanges with a theater school in the U.S. so that the trainees can be challenged by other techniques of theater staging and acting.

To make it happen, the trainees need to immerse themselves in the process. They will need time, and I would like to organize two to three month internships to allow each student to assimilate the techniques from abroad. Also, the school would be very excited to welcome American students as well (with a minimum knowledge of the French language).

This article was originally posted on frenchculture.org in October 2020, and has been reposted with permission. To read the original article, click here.