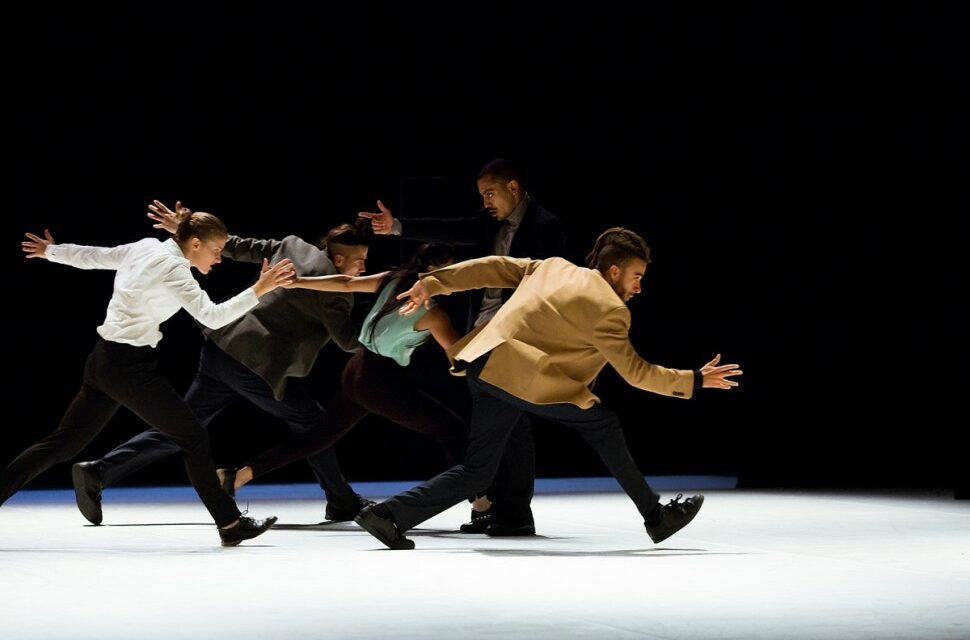 Founded in 2012 by two breakdancers, Souhail Marchiche and Mehdi Meghari, Compagnie Dyptik is based in St. Etienne, France. They’ve been developing choreographic works based upon hip hop values in dialogue with other disciplines.

On October 3rd and 4th, they premiered an adapted version of their work Dans L’engrenage (Literally: In the Gear) at New York City Center’s Fall For Dance Festival 2019; then a second time at Colby College, CT.

Before leaving for New York, Medhi and Souhail answered our questions.

Nicole:  Tell us how the collective Dyptik was formed. How did you discover hip-hop? And why Dyptik rather than Dyptych? What is your approach to hip hop forms and breakdance?

Dyptik: We discovered hip-hop together at the end of the 90s. We came into this culture through breakdance. In our eyes, it was the perfect discipline: athletic, expressive, challenging and accessible to anyone. Back then, this type of dance was not yet taught in dance schools but only through an exchange with others. Hence, we made our first steps in the streets. Everyone could develop their own language; the possibilities were endless. Soon this individually expressive yet, universal dialogue allowed us to meet many people from very different cultures and backgrounds. It allowed us to travel; Given that the language barrier was no longer an obstacle. Body language fascinates us as being powerful and very sincere. We like to study it, observe it, deform it, caricature it, nurture it, enrich it, adapt it…

We started with breakdance and other hip hop dance styles, then we opened ourselves to other aesthetics. Our dance is in perpetual motion, evolution, and mutation.

Because we work as a duo and strongly complement each other, the name Dyptique in French came pretty naturally. We then wanted to modify it to give it a hybrid touch, one that reflected our dance and our company, so it became Dyptik.

N:  Who are the dancers who accompany you and how do you work together? Specifically for the piece Dans l’Engrenage.

D: The dancers who accompany us are artists with whom we have been working for several years. They share our values, our visions, and especially our desire to push and challenge ourselves.

For Dans l’Engrenage we worked and exchanged with artists outside the collective who could nurture our artistic process. We insist on emotion, and committing the body as much to the piece’s movements as to its themes. The piece explores the frantic race for success and tackles the topic of revolt – to give a powerful and sincere performance.

N: In St-Etienne where you are based, you have developed many activities with the Festival Trax and the opening of your studio. Tell us about these experiences – how did they enrich you creatively regarding the development of your action?

D: We had created Les Studios Dyptik as a space for research and experimentation for our artistic creations. Though, we also wanted to make it a place where hip-hop choreographers can find resources and support.

Every year we support and welcome around ten dance collectives. We also wanted to establish a special event dedicated to hip-hop dance with Le Festival Trax. We offer an eclectic, singular program that celebrates creative moments that we wish to share with audiences and other artists.  With a place of research and experimentation within the festival, we can welcome and meet numerous artists who are at different stages in their projects. We can nurture and inspire each other. That is how we continue to grow – through an exchange.

Those events are also an opportunity for us to invite artists to collaborate, explore and in the choreographic lab, but also to give them a “carte blanche” during our festival.

N: Several of your pieces can be presented in a public space. How do you approach these public spaces as a means of presentation?

D: Public spaces are a fascinating place to work because the relationship to the audience is very different. What is interesting to us is that the spectator truly takes part in the spectacle and that the interaction with artists creates sincere, powerful and moving exchanges that will strengthen and nurture the dancer’s performance. This also allows the audience to experience something very special and emotional moment, as close as you can get to the process of creation and the performers. Having witnessed the birth of hip-hop in the streets and having started dancing in public spaces ourselves has reinforced our desire to present our pieces in the same way. 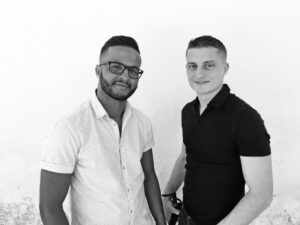 Souhail Marchiche and Mehdi Meghari of Compagnie Dyptik. Photo Courtesy of Frenchculture.orgN: Which one of your recent experiences that influenced your creative work was the most formative? What is your next project?

D: One of the most formative recent experiences was our journey to the occupied territories in  Palestine – Especially our encounter with its peoples and those specifically in refugee camps whose “inhabitants” are constricted by an imposed system. Despite this ever-present oppression, they showed us an unexpected strength and desire to live freely and happily. We were touched by their capacity to create little spaces of freedom for themselves through art, to emancipate themselves, to wander…

We also met traditional dance collectives made up of children, who danced their touching story with a lot of joy… The contrast between the reality those people were living and their state of mind was baffling.

The aesthetic of the postures and the engagement of the body of the traditional Palestinian dances inspired Dans l’Engrenage. And this human capacity to create spaces of freedom, even in the most complex and most oppressing situations, will inspire our next project – which will see the light of day in 2021.

N: Do you know any American hip-hop artists? What appeals to you about Urban art and American culture?

D: Of course, we know of a lot of American hip-hop artists. With hip-hop being born in the States, in our early days we were influenced by the first American VHS tapes that came overseas. So American Urban Art made us want to dance and allowed us as a collective, to come into being. Very soon after though, we embarked on our own artistic path.

This article was translated into English by Natalie Komissarova.

This article was originally posted at FrenchCulture.org and has been reposted with permission. To read the original article, click here 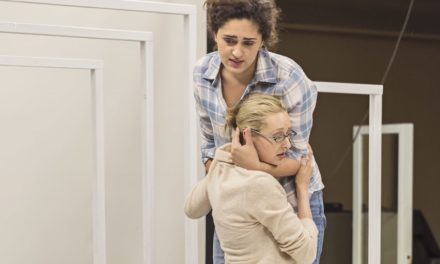 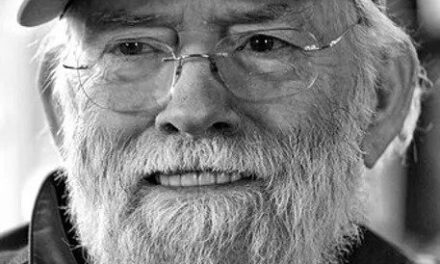 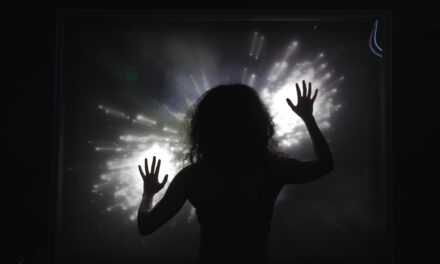