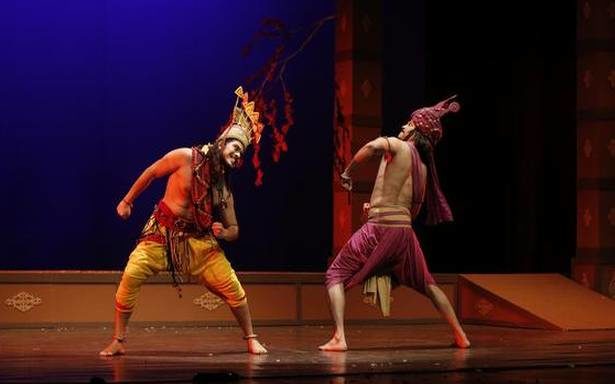 Artistry on stage: a scene from “Mohe Piya.” Press photo

Going beyond the usual Ghatothkach’s story, Waman Kendre’s Mohe Piya brings to fore the utter indifference he and his mother faced at the hands of Pandavas.

While staging a classic an imaginative stage director needs to recreate and reinterpret it to reflect contemporary sensibility. Prof. Waman Kendre, Director of National School of Drama, is endowed with a rare insight to produce classics, not as a museum piece but to discover elements that appeal to the modern audience. His production Mohe Piya, a recreation of Bhasa’s Sanskrit classic Madhyam Vyayoga for Rangpeeth, Mumbai which featured at the Bharat Rang Mahotsav recently bears the stamp of his consummate creativity to define a classic. The production is special in contemporary Indian theatre as it was staged in three languages – “O My Love” in English, “Mohe Piya” in Hindi and “Priya Bawari” in Marathi – by the same cast on the same day in the same auditorium in Mumbai in 2011. All three were directed by Waman Kendre.

Based on an episode from the Mahabharat, Bhasa’s play deals with the encounter between Ghatothkach and a family of a Brahmin – father, mother and three sons – passing through a dense forest. Ghatothkach is in search of a human as food for his mother, Hidimba to break her fast. He wants one of the male members of the Brahmin family to offer himself for this purpose. As the eldest son is close to the father and the youngest is dear to the mother, the middle son – Madhyam – offers himself for the food of Hidimba. With the permission of Ghatothkach, Madhyam goes to a nearby river to bathe before his death, but he takes a long time to return. Ghatothkach shouts, “Oh Madhyama – the middle one! Oh, middle one!” Soon Bhim, the second son of Kunti and Pandu, appears on the scene. The Brahmin’s middle son is spared. After a fierce contest of prowess between Bhim and Ghatothkach, Bhim voluntarily surrenders to him to become the food for Hidimba. On reaching, Hidimba and Bhima recognise one another. She tells Ghatothkach that Bhim is his father. Bhasa’s play ends with the happy reunion of the son, the mother and father. 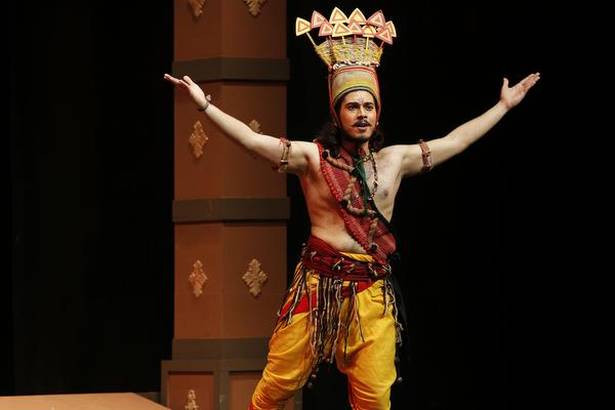 Kendre’s play transforms this happy reunion as a point to recreate conflict. Both mother and son question the criminal neglect of Bhima of Hidimba whom he married with the consent of his mother, Kunti when the Pandavas were in exile. The original one act is transformed into a full-length play. A deeply disturbing conflict ensues between the ethical values of Aryans and non-Aryans through the interactions of a father, mother and son. Then the action shifts to the battlefield of Kurukshetra.

With each passing day, the war becomes fierce and bloody. The Pandavas and the Kauravas warriors are engaged in a fight-to-finish battle in which moral codes of a just war are unscrupulous broken by both the parties. Karna possesses a weapon powerful enough to kill Arjun. To deprive Karna of it, Ghatothkack is used. Uttering deafening war-cry, he destroys powerful warriors of the Kauravas and now the life of Kaurava Prince Duryodhana is the target of Ghatothkack. So Karna is forced to use the weapon against him.

The entire action takes place on a bare stage with a raised level upstage. The action moves at a fast pace in a seamless manner. Music being one of the vital elements of Kendre’s oeuvre, it plays a significant role in reinforcing the action and producing deep emotional impact. Above all, it is blended with other elements to produce an artistic whole. Choreography by C. Gopal Krishna and Anil Sutar deserves special mention for imparting vigour and fast pace to war scenes that are watched irresistibly by the audience. 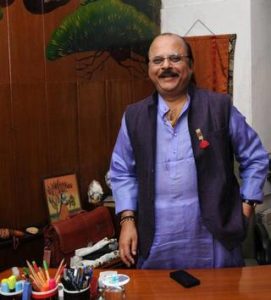 Waman Kendre, Director of the National School of Drama.

While reinterpreting the classic, Kendre has broken the stereotyped image of Hidimba and her son Ghatothkach usually portrayed as demons in black and weird costumes on the stage. Kendre’s Hidimba is a beautiful young woman and so is Ghatothkach. Of course, there is the difference in the costumes of son and mother which are designed on the pattern of tribal ethos.

In a subtle way, the director has shown the Pandavas’ utter indifference towards Ghatothkach in the denouement. As the great warrior Ghatothkach is killed, there is no Pandava including his father Bhim to grieve over his death. Only Hidimba comes, lamenting bitterly. It is a bitter comment on the Pandavas who have used Ghatothkach. The title of the play itself is an ironic comment on the relationship between Bhim and Hidimba as husband and wife.

Rutwikk Kendre brings to his portrayal of Ghatothkach vibrant energy, intensity and emotional depth creating an image of an invincible warrior out to destroy the entire army of the enemy. Renuka Bodhankar as Hidimba, the neglected wife and single mother, expresses her protest against her husband belonging to a so-called higher culture. Suhas Suryawanshi as Bhim paints a convincing portrait of the mighty Pandava.