In Our Daughter’s Eyes, composed by Pulitzer prize winning composer Du Yun and librettist Michael Joseph McQuilken, is a probing one-act monodrama, which interrogates what manhood and fatherhood mean in the 21st-century. Formidable baritone Nathan Gunn plays the protagonist, a father who recounts his wife’s joyful, soon turned turbulent pregnancy, and the personal challenges he had to wrestle with along the way.

The opera uses a tableau-like dramaturgical structure to move through the protagonist’s different emotional stages of reckoning with his own flaws, and the prospect of a stillborn daughter.

As the creative team revealed in the opera talkback session on 11 January, their real experiences get translated into the dramaturgy of the opera. McQuilken and his wife were both dealing with their second miscarriage when he was writing the libretto, which tapped into something operatic to him at the time. Du Yun, on the other hand, was reflecting on her own relationship with her father when she was composing the opera, thus enabling her to relate to the subject matter in a poignant way.

Diverse media forms are used strategically in the performance. One constant thread throughout is the journal, which the protagonist uses to document his ongoing thoughts and struggles. Through visual projections of his journal scribbles, we are let into his inner world, which sometimes deviate from what he sings, lending much nuance to his character.

A kind of improvisatory ethos is invoked in the medium of journaling, for Gunn turns to it every now and then to jot down what he is feeling. We are momentarily led to believe that we are experiencing what he is experiencing in the here-and-now. The scratching sounds his pen makes on the paper—what we could call real sounds— further imbues a heightened realism in his performance and storytelling.

Gunn’s vocal versatility is fully exemplified in the sheer range of genres he commands. His lush, warm baritone voice brings much tenderness to the father character. But Gunn is also capable of  explosive rock singing, much to our surprise.

After learning that his child is “incompatible with life,” the protagonist engages in heavy drinking in the bar. We are greeted by violent strobe lighting effect on stage, as the music too takes a monstrous turn. Gunn growls aggressively into the beer bottle, transforming into a completely different vocal persona on stage. Audiences are instantaneously transported into the punk-edged rock soundworld, the sleazy bar, and the character’s tormented psyche. This scene reminds me of the Girl’s punk singing number (“Brick J”) in Du Yun’s Pulitzer-winning opera, Angel’s Bone (2015), which likewise evokes a haunting quality.

Nathan Gunn as the protagonist, engaging in heavy drinking after learning his daughter will be a stillborn. Photo Credit: Maria Baranova.

The most moving moment in the opera, paradoxically, lies in a silent scene. It occurs when we learn that the protagonist’s wife wishes to gift their daughter’s eyes to someone else who needs it. As Du Yun revealed, no words or music can ever attempt to capture the intense grief the protagonist experiences at this moment. Hence, silence.

Du Yun’s inability to find expression for grief leads outwards to bigger questions like, how do we use music to represent pain and the ineffable? Is it truly possible? Can silence, then, be expressive? I believe asking these questions are critical, as creative artists are increasingly turning to the performing arts to envoice traumatic happenings around our world today. 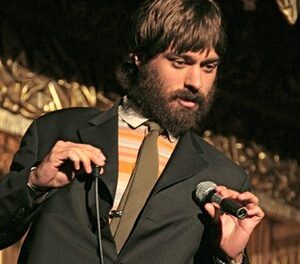 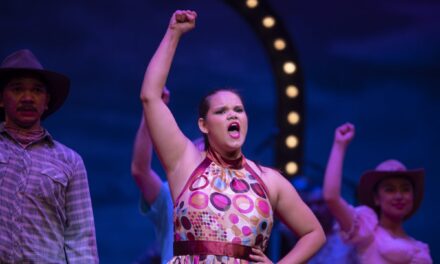 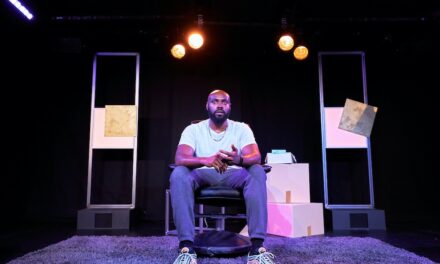