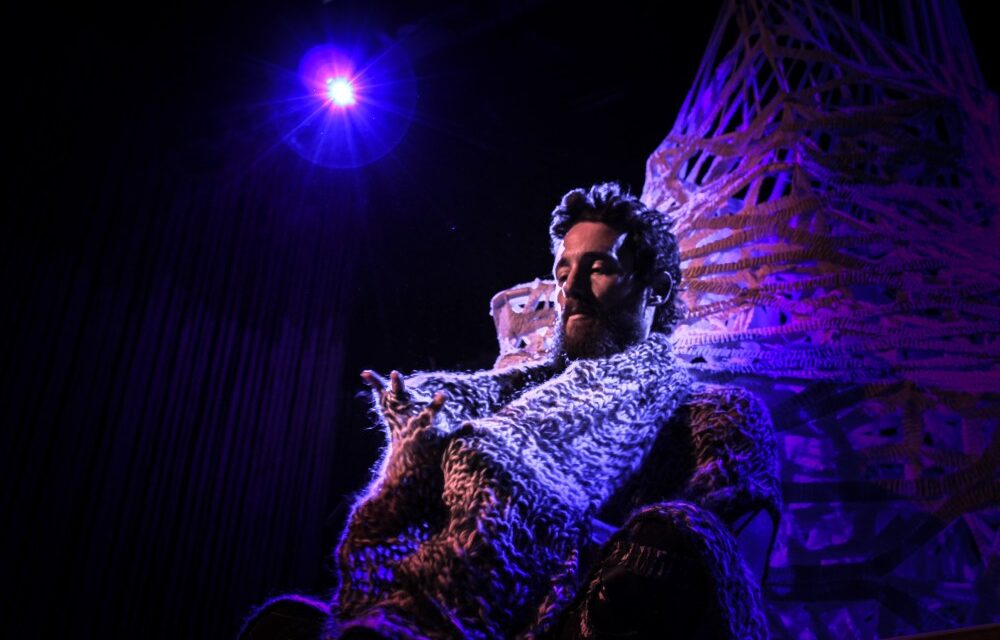 Composed by Valgeir Sigurðsson and directed by Sara Martí, Wide Slumber for Lepidopterists is an Icelandic opera-music theatre masterpiece where science meets spirituality. Inspired by the eponymous book by A. Rawlings, the transformative performance held audiences spellbound at the 2021 PROTOTYPE Festival.

Originally presented as part of the 2014 Reykjavik Arts Festival, the work pairs sleep and dream studies with lepidoptery—the study of butterflies and moths. Produced by VaVaVoom Theatre and Bedroom Community, a Reykjavík-based record label founded by Sigurðsson, the performance asks humanity to go within to navigate the unseen. It is a libretto connected with a willingness to undergo a metamorphosis.

Singers Alexi Murdoch, Sasha Siem, Ásgerður Júníusdóttir and performer Sigríður Sunna Reynisdóttir exercise a mesmeric influence on the audience. The piece hints at cyclical processes, expressing a quintessence of the human journey through the earthly and spiritual realms. It is a non-story that truly awakens a sense of connection with and compassion for life in all of its forms.

Serving as a champion of new works and otherworldly art forms is a theme that plays out in Sigurðsson’s walk of life. The virtuoso collaborated with fellow Icelander Björk on an Oscar-nominated Best Original Song, I’ve Seen It All from the film, Dancer In The Dark. Sigurðsson’s oeuvre is unique as it is unexpected. In 2000, Sigurðsson co-produced the end credits music for Spike Jonze’s Being John Malkovich.

Sigurðsson spells out what it was about angela’s book that inspired him to turn it into an opera-music theatre piece: “Just looking at the text in the book, in the beginning, was that the poetry kind of jumped out as more as a musical text to me than words in the beginning. But because of how it’s laid out sometimes on the pages the text is not sitting in a neat line or lines like you would normally see. It’s often like letters and little words flying out in the shape of different things like the shape of a butterfly. He continued, adding “The formatting was one thing that really caught my eye in the beginning. This text needs to be kind of put into music I think that is how I would kind of best understand it. I just want to get into this text and I want to put melodies around it and find these rhythms that are in the pages I think in my mind when I look at it.”

Drawing on scientific inquiry gathered vis-à-vis lepidopterists at Harvard University and sleep research from University College London, the rendition is a collection of songs linked together. Canadian poet and interdisciplinary artist, A.Rawlings comments on the curious pairing of sleep studies and lepidoptery: “It is a really disparate mix. I think there are probably two reasons why they came together in my mind. And one is absolutely related to what Valgeir was just saying. That in order for him to comprehend what was happening textually for him that he wanted to put music around it.” She continued, adding “And I can say something quite similar about both the subject of sleep and dreams as well as lepidoptery. In order for me to understand those two subjects, I needed to put text around it. I needed to put experimental poetry around it.”

From the thousand-hand male Bodhisattva specimen and lady laboratory scientists to the intricate sonic stratum—the stagecraft was hypnotic. The spectacular projection and sound design elicit visions of exuberant talent. Costume designer extraordinaire, Harpa Einarsdóttir, outfitted the cast. Ingi Bekk, lighting and video design; Pierre-Alain Giraud, animation and video art; and, Dan Bora of sound design took the audience on a somnambulant stroll unlike any other.

Marked by sparkling serendipity, Rawlings comments on the collaborative nature of the book, which ultimately led to the opera: “This is the first book that I wrote and it took about five and a half years to do. At the outset of the project I was approached by a visual artist Matt Ceolin in Canada who is a long-time, he is like my teenage best friend. Matt asked if I’d like to do a collaboration with him…he does the visual art; I do the text.” She continued, adding “At that time I thought well, I’m really interested in learning more about sleep and dream studies and I know that Matty is really interested in insects and etymology. I don’t want to spend time with most insects. However, I could totally spend some time with butterflies and moths. So that’s kind of how it came about; these two really unrelated subjects and then me really trying to figure out what shared lexicons do they have and how can I kind of start to weave these together somehow.”

When it comes to the stage adaptation, dramaturge Sigríður Sunna Reynisdóttir and director Sara Martí retain the big picture. Bringing vibrant images to the forefront of awareness, Sara Martí makes a declaration on the work’s effect on the audience. “First of all, I love that it was not a story; it was just really freeing. When we come together to make theatre we just get really excited about you know how we are going to make visuals happen from the piece of paper. There are a million stories in the ‘not story’ so you know, we got to play with every single piece.” She continued, adding “There is a story in every single piece and that’s what was so thrilling about it and we felt it was so open; it was so open. So we could do pretty much whatever we wanted to do with it.” The performance tracks the stages of sleep and waking the mind. The choreography directed by Valgerður Rúnarsdóttir underscores all these layers informing each other quite interestingly in the physical space.

Prop design by American Marie Tanya Keller and set design by Eva Signý Berger take the masterwork of collective imagination to next-level cool. Depth of emotion was exemplified by way of amplification of frequencies, rhythms, and melodies. Live music performed by James McVinnie, Liam Byrne, and Ólafur Björn Ólafsson opened the door for a whole new capacity and perception. Much in the way a caterpillar transforms into a butterfly, the recorded sounds of wavering accompaniment evoke notions of a flourishing life.

Sustained by suggestion and metaphor, the masterful performance elegantly corresponds with states of metamorphosis. Like the splitting of the chrysalis and the slow unfolding of a butterfly’s wings, the characters on stage weave poetry from one dimension to another. As a consequence, the audience is able to transform states of consciousness. Going beyond the vessel in their explorations, the artists and audience undergo a deep experience that is regenerative in nature.

Serving as a cue to go beyond the surface, Wide Slumber for Lepidopterists awakens society’s sense of connection with and compassion for life. The composition brilliantly calls for old patterns to fall away so that new paradigms can emerge—a prompt to call upon the Divine force within.