“I Don’t See Race” And Other White Lies 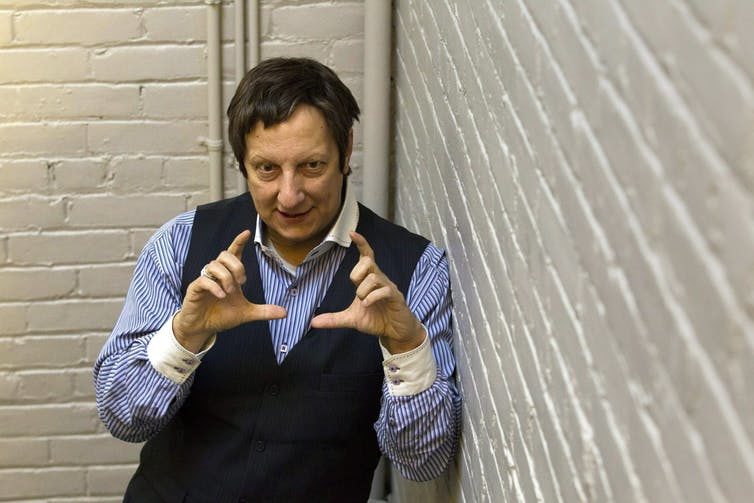 No one white really wants to talk about being white.

Lately, the “color-blind” approach to race has been a hot topic in Canada. Soon after a run of his play SLĀV was canceled because of racial insensitivity, the Québec director Robert Lepage is again facing criticism for not including Indigenous performers in his stage show Kanata.

When SLĀV was criticized for casting white singers as Black slaves, Betty Bonifassi, lead singer in the show SLĀV, told reporters that she “doesn’t see race.” Bonifassi said she believes “love and suffering…unite humanity” and SLĀV’s producers argued a mostly white cast is justifiable because of slavery’s “universal” roots.

Yet Black people weren’t cast, while white people took center stage. Montreal activist Marilou Craft, one of few who has actually seen and analyzed the play, argues persuasively that

“for someone of African descent like me, the play can be quite violent to receive.”

And as the bestselling author of Policing Black Lives, Robyn Maynard, tweeted about SLĀV,

This is not the first time a public figure in Canada has claimed to be color-blind when it comes to race. Conservative member of Parliament Maxime Bernier tweeted,

“I thought the ultimate goal of fighting discrimination was to create a color-blind society where everyone is treated the same.”

That sounds reasonable. But if we dig a little deeper, SLĀV and Bernier’s comments aren’t “color-blind” at all. 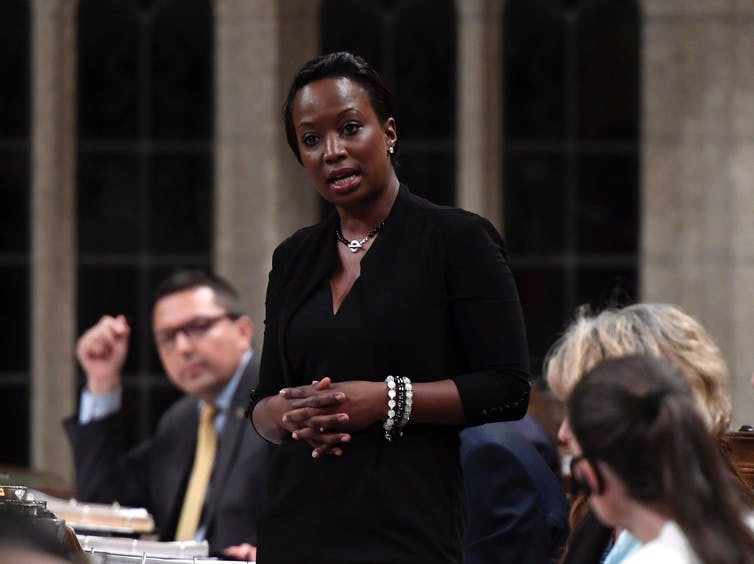 Parliamentary Secretary to the Minister of International Development Celina Caesar-Chavannes rises during Question Period in the House of Commons. Conservative MP Maxime Bernier reproached Caesar-Chavannes for being too focused on the color of her skin. THE CANADIAN PRESS/Justin Tang

And why does a white actor depicting slavery “unite humanity,” but not a Black MP discussing racism?

For decades, scholars like Steve Garner have demonstrated that being white has long been equated with being human, universal, or as Garner puts it, the “Greenwich Mean Time of identity.”

In his book, Whiteness, Garner explains,

Canadians also tend to cherish the idea that we are more open, more multicultural, and more benevolent than Americans. But the advantages of being white in Canada are real and, at this point, well documented.

White Canadians are less burdened by pollution than other racial groups. They have longer life expectancies, higher income, and better educational opportunities. White Canadians are more likely to receive better healthcare. They are less likely to be incarcerated, to be stopped and searched by police, and to face bias in our criminal justice system.

If we live in a color-blind society where everyone is treated the same, then how do we explain these inequalities?

In his online lectures, the University of Toronto psychology professor Jordan Peterson theorizes about why some people have greater success than others. In his view, some people are simply more competent and this creates natural hierarchies.

Peterson is not specifically talking about white people. He describes “the natural laws of the universe,” which perhaps accidentally suggest that white people are more “competent.”

Instead of understanding the social advantages of being white in Canada as deeply constituted by racism and colonialism, the idea that white people are “just individuals” is used to support deeply held racist beliefs that certain people, who often happen to be white men, are “just better.”

These are dangerous ideas rooted in white superiority, but they are deeply woven into the fabric of our society in mundane ways. For example, when police constables argue that Indigenous people are over-represented in arrest statistics not because of differential treatment or the intergenerational effects of colonial violence, but simply because they engage in more criminal activity, they are effectively saying that Indigenous people are inherently criminal.

People who refuse to name whiteness, like journalist Randall Denley, tend to blame racialized people for the inequalities they face. In response to the Black Lives Matter movement, Denley wrote:

“Clearly, some Black people feel that things are so bad that they have to assert that Black lives matter. Yes, they do, and they will get better when Black people start doing a better job of lifting each other up.” 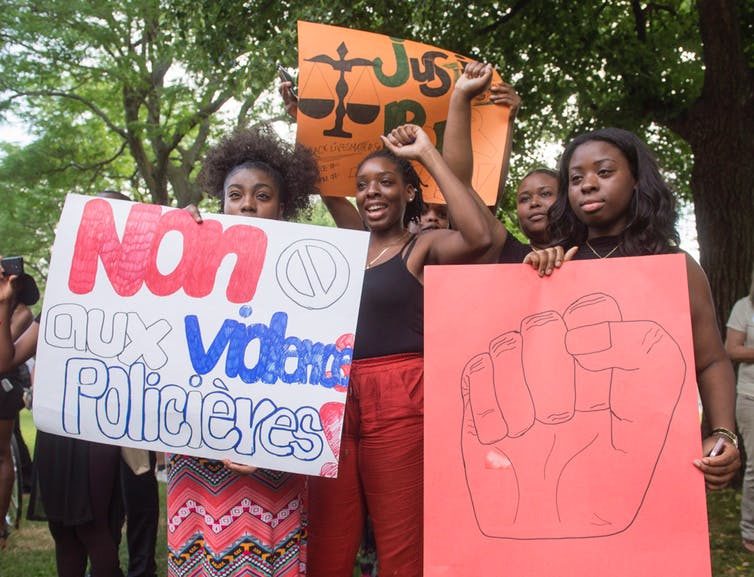 Supporters of the Black Coalition of Québec take part in an anti-police brutality demonstration in 2016 in Montreal.
THE CANADIAN PRESS/Ryan Remiorz

When whiteness goes unnamed, racialized people are made to appear as though they deserve to be stopped more often by police, drink polluted water, have less access to educational and employment opportunities.

This is what white supremacy looks like in contemporary Canada.

“it insists on ‘whiteness’ as a flaw, a failing, and, as it almost always is, when yoked with ‘male’ is the verbal equivalent of a spit.”

Murphy, Peterson, and others feel personally insulted by the word “white” and take offense at being lumped together instead of celebrated for their individuality. For them, calling someone white is racist. They are “just people.”

Of course, we all want to be recognized as individuals and no one wants to be reduced to a racial identity, although, as writer and podcaster Michael Harriot explains in his The Root article, this recognition is rarely extended to people of color.

White Canadians are obviously not a homogeneous group. But ironically, one thing that unites otherwise distinct groups of white Canadians is our aversion to naming whiteness.

In Québec, many Francophones gloss over their white privilege, preferring instead to see themselves as “les nègres blancs d’Amérique” or, more recently, as a Métis people, despite opposition from Black and Indigenous communities inside Québec.

White English-speaking Canadians, for their part, spend a great deal of time pointing out racism in Québec instead of acknowledging their own. These are diversion tactics which may well be unintentional, but they nonetheless thwart racial justice.

In the end, there are more similarities than differences between our distinct brands of Canadian racism. Despite claims to the contrary, white Canadians on both sides of the French/English linguistic divide have relatively little in their racial past of which to be proud, thanks to our slaveholding, land-stealing, treaty-breaking, residential school-teaching ancestors. Does it really matter whose racism is worse?

Indeed, there are examples of white Canadian justice activists. And there are examples of people from other racial groups doing terrible things. But as a group, white Canadians have been “very competent,” as Peterson might say, at creating institutions, laws and belief systems that continue to give me, as a white woman, advantages over my racialized neighbors, colleagues, and friends.

How exactly do we put an end to these inequalities if we won’t name whiteness as an overarching problem?

No one white wants to talk about being white. We don’t often write plays or tweets about it. As author Toni Morrison wrote,

This article originally appeared in The Conversation on July 17, 2018, and has been reposted with permission. 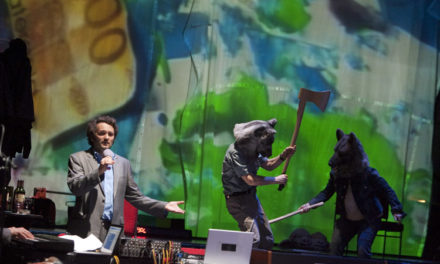 Failing to Understand Together: What Is Theatre Seeking In Current Affairs?