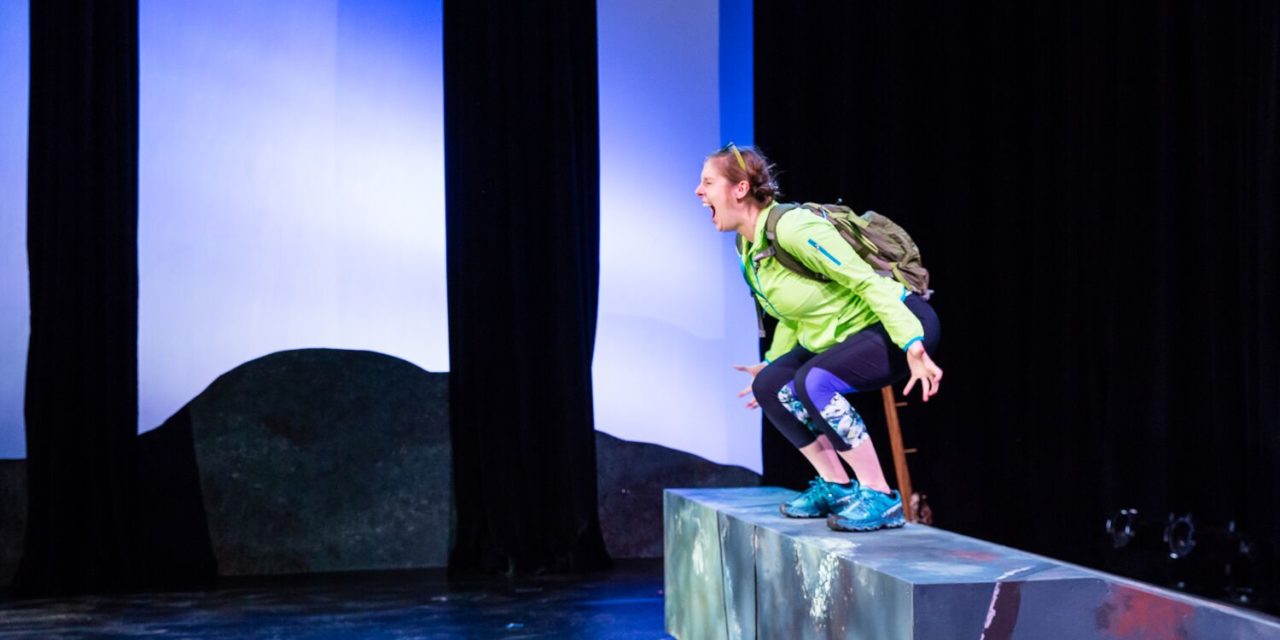 In the world of New York theatre, it’s not uncommon to witness thematic ties across mediums and platforms. This year, social politics has taken top billing as the playwright theme du jour. From musicals to plays to cabaret to devised theatre, much of it boils down to “a theatrical history of how we got here and ways of coping.” SHE-SHE-SHE, which opened at the Mark O’Donnell Theater as part of the Hook & Eye Theater Company season, plays along that line as well while centering women in search of “Agency, Healing, and Wanderlust.”

This new devised work, directed by Chad Lindsey, is colorful, audacious, and not without its share of well-earned laughs. Conceived by Carrie Heitman and written by Cynthia Babak, the play takes audiences through the past, present, real, imagined, hypothetical, and subconscious in an attempt to underscore what it means to escape being stuck. SHE-SHE-SHE is, in its most reduced form, a great example of more-than-capable actors flexing a broad set of skills as they double and triple vastly different roles to help fill out an expansive story. It is Emily Kunkel, however, whose understated and hilarious performance as Jolene (a midwestern woman from a large family who just wants to be alone) regularly steals the show and reengages the audience; and this reengagement is KEY, as it can be very easy to find yourself turned around and lost in the play’s expansive wilderness.

Devised plays are often HIGHLY creative and collaborative. Constantly pushing boundaries in exploration of what theatre is, devised theatre remains outside the box. With creativity in spades, SHE-SHE-SHE hits all those marks. There is, however, a dueling identity within the play that undermines the integrity of the work as a whole. Beyond the occasional “CAMPY” theatre moment that seems intended more for the actors performing than for the audience (which, it should be said, is TOTALLY APPROPRIATE FOR THIS MEDIUM), the work hasn’t quite (yet) struck an even balance between the stories in different time periods. The contemporary storyline of modern women going into the wilderness to find themselves is completely relatable and by far the most interesting and developed narrative being told in this work.

It’s the 1930s stories of women in the “She-She-She” camps that seem to fall flat despite well-delivered performances–partly, if not mostly, due to the sheer amount of expository work needed to convey the world of the “She-She-She” camps. These camps, instituted by Eleanor Roosevelt, were intended to help women earn a living by serving in the newly instituted National Park Service. In the play, the stories of these women are told alongside the stories of contemporary women searching for agency.

The creative and theatrical instinct to touch on such an interesting and little-known fact from American history has all the novelty of a brilliant idea, but the work falls short of developing the world of these camps in a way that satisfies the curiosity garnered by a genuinely good idea. Furthermore, the friendship between Eleanor Roosevelt and Pauli Murray (and inspiration for the story) punctuates the work in a way that regularly deflates its momentum. The drama of how they came to know of each other feels sudden and manufactured; and beyond its feeling subordinate and even alien to the rest of the story being told, it never felt like there was a payoff to their narrative. As an audience member, I felt like I was to understand “and they met, and became friends” without the characters actually DOING that. As a whole, the two eras feel like two separate (and completely viable) plays on their own; and though there are parallels between the two times (generally through lineage), they aren’t strong enough to uphold the expanse of the work, and they often feel like an afterthought.

It’s not that the play doesn’t know what it is–quite the opposite. As adults, most of us know who we are through who it is we set out to be; and we realize change only once it’s happening to us. SHE-SHE-SHE is evolving, growing into and out of itself–due in large part, I imagine, to the creative and collaborative nature of devised theatre. Through that lens, SHE-SHE-SHE is a great example of why producing devised theatre is important. As a part of the “how we got here and ways of coping” canon, it is instructive. Relentlessly alive, it embodies the idea that “there are no wrong answers.” Tipping its hat to intelligent design, SHE-SHE-SHE serves as a meta-commentary on growth and discovery while growing and discovering.

Presented by Hook & Eye Theater, SHE-SHE-SHE runs at the Mark O’Donnell Theater at the Actors Fund Arts Center through June 2. 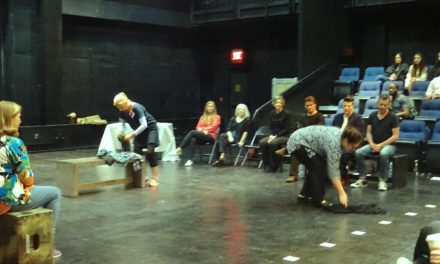