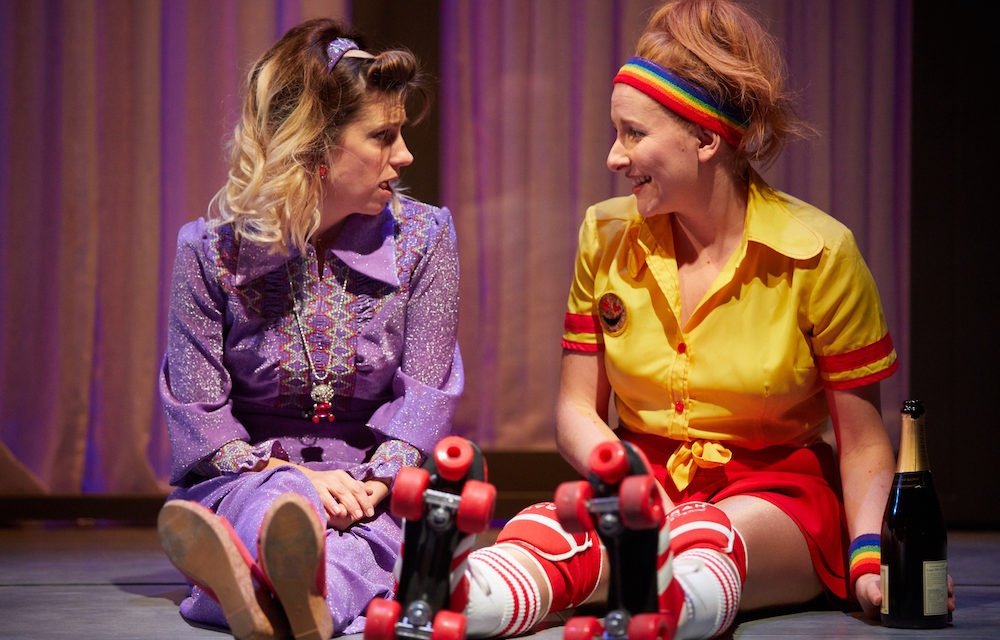 Holy shit! After being closed for two long years, the old and battered Tricycle Theatre in Kilburn has been refurbished and relaunched, with a name change and £5.5 million-worth of improvements. It’s now a much more welcoming place, full of light at the front and with an on-street café, as well as easy access to the new plush seats and excellent sightlines. Although some patrons have grumbled that the name change is a betrayal of past achievements, disrespecting its legacy as a highly political place, Indhu Rubasingham, the artistic director, has created a much more hipster-friendly, much more middle-class venue than the previous community hive.

But not everyone likes that. The opening night of the opening show featured a small demonstration, with protestors politely holding bright yellow placards with slogans such as “Give us back the Tricycle we love.” Yet there were no disruptions, and although the café’s cappuccino machine was taking a night off, the bar was serving food that would make any gastropub proud and the prices of the drinks are shamelessly high. But who cares? In this warm, beautifully decorated environment, all deep crimson, and dark wood, with a genuinely lovely auditorium, it seems churlish to make jokes about the gentrified venue’s new name, even if it does suggest a bake-off just as much as a creative furnace.

If the Kiln is Kilburn’s new creative crucible, you’d expect the opening play to be a nice middle-class comedy, and at first Rubasingham doesn’t disappoint. Coyly advertised as Holy Sh!t, actor and writer Alexis Zegerman’s new play is a topical account of the lengths that some parents will go to get their kids into the best local schools. Or, at least, that is how it begins. Sam Green and Simone Kellerman are a nice middle-class professional couple (he a designer; she a journalist) and so are their friends, Nick and Juliet Obasi (him a teacher; her in marketing). Although Simone and Juliet have been best friends for decades, their relationship comes under strain when they both try to get their four-year-old girls, Milly and Sophie, into the best local school.

This happens to be St. Mary’s, a Church of England school which gets great results. But although Juliet is a Christian, and even believes in God, Simone and Sam are more opportunistic. They are Jewish so they have to learn to make some adjustments for the sake of their Milly. Cue some good jokes about religion and hypocrisy, as the pair begin to go to church and try to convince the local priest that they can be good High Anglicans. What turns this light comedy of manners—with its enjoyable scenes that include a retro party—into something darker, more emotive, and more interesting, is Zegerman’s willingness to explore not only belief but also prejudice. And she’s not afraid of talking about the ugly side of people’s reaction to the difference, to diversity.

A small Muslim child calls Simone “Jew” in the street; then the offstage children, in a frantic escalation that reminded me of some scenes from Yasmina Reza’s God Of Carnage, exchange religious and racial slurs (Nick is black so Sophie is mixed race). The temperature rises, and even innocently polite phrases, such as “We just came to pay our respects,” become as abrasive as gravel in a risotto. Nick, who is a convinced atheist, argues his case strongly, while Simone reclaims her Jewish heritage when a member of her family dies and she decides to mourn in the age-old traditional way. She also begins to believe in spiritual visitations. And while Nick tries not to over-react to everyday racism, his wife has no such qualms about fighting her corner as a mother. In fact, the fights between the two mothers rapidly escalate into a rage.

Zegerman’s characters are well drawn, each having a nice balance of attractive and annoying characteristics, and she throws them into a whole series of nightmarish scenarios, where their parental feelings are thoroughly mashed up. Not all of the jokes land equally well, but those that do exude a powerful tang of truth, and there are moments of deep emotion that bring tears to your eyes. As this satire on parenting, which is admittedly occasionally predictable, revs up, other themes such as female friendship and cultural as well as racial prejudice barge their way to the fore. Although to some audience members much of this is unexceptional, a lot of it sounds much more troubling if you happen to be one of the many minorities involved. By the end, when only one of the two couples is successful in their school application, you can’t help but wonder—as you are surely meant to—whether it is religion, race, or class that is the main determinant of a child’s success.

In the context of the antisemitism row in the Labour Party, the Islamophobia row in Conservative ranks, and the everyday racism of even polite society, Holy Shit feels relevant and contemporary, its emotional and intellectual intelligence always near the surface. (Don’t expect too much subtlety.) Still, Rubasingham’s sharp and entertaining production, cleanly designed by Robert Jones, is very enjoyable and fits snuggly into the much-modernized auditorium. Her cast is faultless, with Dorothea Myer-Bennett and Claire Goose offering contrast and depth as Simone and Juliet, while Daon Broni and Daniel Lapaine give a fully rounded feel to two men who are sometimes in danger of being eclipsed by their wives (the couple dynamics here are instantly recognizable). With this zinging production Rubasingham has announced not just the revival of a refurbished old theatre, but the arrival of a brand new venue. No shit.

Holy Shit is at the Kiln Theatre until October 6.

This article appeared in Aleks Sierz on September 13, 2018, and has been reposted with permission.