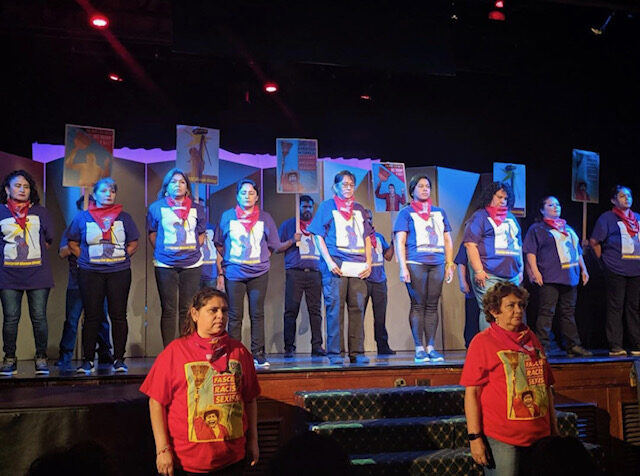 Cast Members from "¡YA BASTA!: TIME’S BEEN UP" at Hollywood Fringe Festival. Photo Credit: SEIU-USWW.

Theatre-goers who were willing to tread off the beaten path at Hollywood Fringe Festival were treated to a fine piece of social justice theatre the likes of which we rarely see in ¡YA BASTA!: TIME’S BEEN UP, written by the ¡YA BASTA! Theater Company and directed by Jeanette Godoy.  The play was performed by a cast of men and women who seem to be members of the Service Employees International Union-United Service Workers West, including janitors, security, airport workers, and the workers who take care of California’s stadiums, arenas, amusement parks, racetracks, and residences.  The program doesn’t explicitly specify this but the performances were both so stripped of all artifice and so clearly emotional for many of the women on stage that it’s hard to doubt these were true stories we were hearing and ones that should be shared.

The Assistance League Theatre (or Assistance League Playhouse, depending on what website you visit) is a spacious dream of a proscenium space where The Assistance League of Los Angeles Theatre for Children has been producing plays since 1929 and it was packed for the performance of this play that illustrates the kind of sexual harassment and abuse female janitors endured before the women in the union organized in hopes of stopping it from happening.  From the “Justice for Janitors” Campaign that happened in the 1990s (to fight for better wages and minimal health-care coverage) to hunger strikes and peaceful protests to “End Rape on the Night Shift” asking the California State Capital to pass AB2079 (aimed at stopping the assaults) men and women, many of them immigrants, demanded better treatment long before the #MeToo movement brought the nation’s attention to the continuing struggles women have in this country to exist without having to live without the constant threat of sexual abuse or retaliation.

In the play, we meet a young woman named Sarita (Veronica Giron) who is new to the night shift and watch her endure the unwelcome attention of her boss Mario (Santiago Rubio).  The play intercuts between Sarita’s story, a meeting of women at their Union learning how to recognize sexual harassment and respond to it, and interludes where protesting women walk the aisles with their signs and a man made up like a Lion wearing a suit (Joe Luis Cedillo) stalks the women silently, eyeing them with an intensity that makes you squirm.   When Mario finally arranges to be alone with Sarita, the young actor sits in a chair, eyes shut with the ferocity of a woman trying to erase a memory.  Sarita begins, “Something happens when night falls and you are a janitor.  It is like a horror movie that we’ve all seen, as soon as the moon appears, these men are transformed into lions, looking for his next victim, hunting us in the buildings.  And we are like sheep, alone, and unprotected.”    As she explains what happened to her, Mario stands to one side of her and the Lion stands on the other.  They are close to her and move their hands over and around her – they never touch her but it doesn’t matter.  The image makes your skin crawl, it makes you want to scream, it makes you want to run.  In other words, it does exactly what it is designed to do.

This isn’t a slick production with super fast scene changes and professional actors but that doesn’t detract one bit from the message they are all trying to convey.  There is a bill on the table, AB-547, that seems to be crafted solely to make it mandatory to train employees about sexual harassment and what isn’t appropriate in the workplace.  The play doesn’t shy away from its political intentions when it asks its audience to do all they can to get the bill passed – that’s why it exists and it makes perfect sense.  After listening to these women and men speak about this serious problem, it’s hard not to agree that “Enough is enough”.

The play was performed in Spanish with English subtitles projected above the stage.  The Assistant Director was Madai Antunes.  Lighting Design and Props by Luz Gaitan.  Set Design by Marco de León.  Costume Design by Zulian Salazar.  Sound Design and Stage Management by Madai Antunes.  The Make-up Artist was Greeny Camberos. 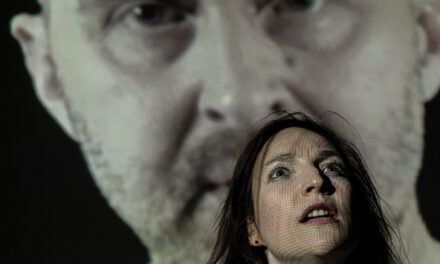 “I Thought I Could Read God’s Mind”: Katrin Arefy’s “The Portrait of An Angel, A Lion, A Monster”