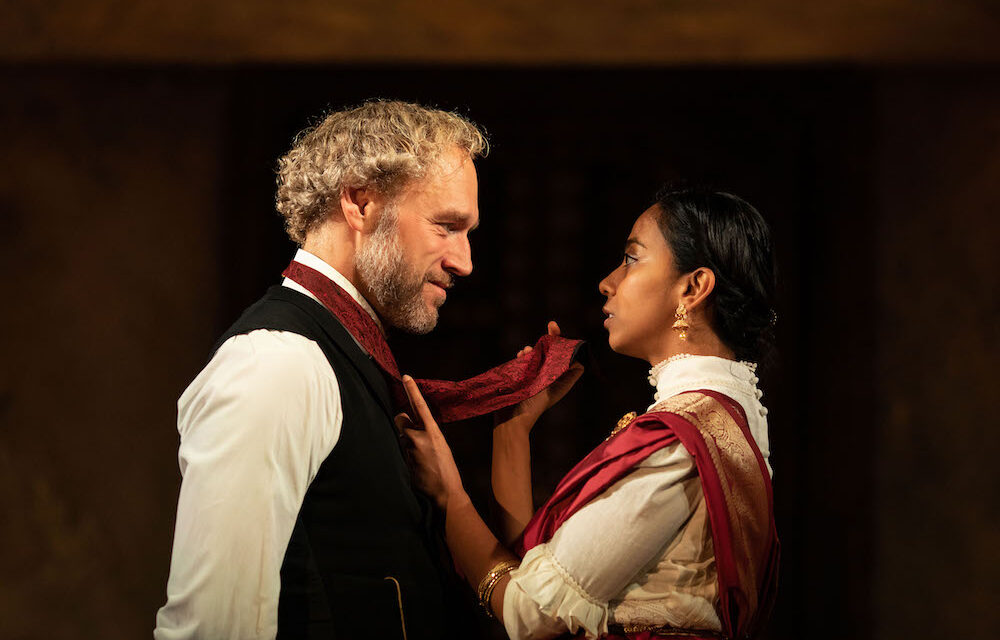 Rachel O’Riordan, the new artistic director of this Off-West End venue, has arrived with a program of new work by and about women, a project which also manages to chime beautifully with what is happening in other theaters outside London. So Tanika Gupta’s excellent reimagining of Henrik Ibsen’s A Doll’s House is not only a hugely enjoyable evening but also speaks to other similar adaptations. Earlier this year, Stef Smith’s version of the same play, at Glasgow’s Tramway, had three Noras, and also brought the story into the contemporary world. Elsewhere, Cordelia Lynn has adapted Hedda Gabler in her Hedda Tesman at Chichester, while Rebecca Lenkiewicz’s version of An Enemy of the People has a female Stockmann at the Nottingham Playhouse.

In Gupta’s A Doll’s House, Ibsen’s Nora has become Niru, a young Bengali woman who is married to Tom Helmer, an English colonial administrator just promoted to the highly respectable position of the chief tax collector. The setting is Calcutta (now Kolkata) and the year 1879, the same as the date of the piece’s first production in Copenhagen. This evocation of the Victorian Empire enables the playwright to add layers of meaning, especially an explicit examination of the effects of racial antagonism, to Ibsen’s study of patriarchy and female emancipation. At the same time, she follows the original plot very closely, and this means that the drama soon starts to grip.

In the past, Niru has borrowed money from Kaushik Das, an Indian struggling to make his way in colonial society, by forging the signature of her dying father. Although her motives were completely laudable—to save Tom’s life—she fears that her husband will not approve, so when Das is sacked from his government job by Tom the threat of blackmail and a ruinous scandal looms large. Although Niru is supported by Uma, her older servant, and mother figure, she need more practical help: can Dr. Rank, an anti-imperialist English doctor and Tom’s friend, help out? And what exactly would that cost her? Or can the arrival of Mrs. Lahiri, her estranged schoolfriend, offer a solution?

O’Riordan’s production has a great set by Lily Arnold, a sun-speckled courtyard which effortlessly passes for any of the rooms in the Helmer household, and her cast is superb. Anjana Vasan is a petite Niru, who looks small and fragile when her husband, played by Elliot Cowan, towers over her, this visual image suggesting perfectly the mixture of masculine and colonial power that lies at the core of this adaptation. At the beginning, Vasan really is child-like, smuggling sweets into the house and sharing them secretly with Arinder Sadhra’s Uma. By contrast, Cowan’s Tom is confidently dominant, taking her into his arms as if she really was just a doll, and holding her up in the air.

Soon enough, with the arrival of Colin Tierney’s gloomy Dr. Rank, a man who seems to accept his own ill-health with equanimity, but is sharply critical of the British presence in India, the political issues of the play come into focus. Rank questions what exactly the Brits contribute to the subcontinent, and he suggests that the Raj will not exist forever. This sense of mortality is echoed by Assad Zaman’s Das, who is not only portrayed as a dodgy character, but is also allowed to articulate some of the anger and bitterness felt by educated Indians. Both actors convey the threats, some open, some more subtle, that their characters pose to Niru.

By contrast, both Sadhra’s Uma and Tripti Tripuraneni’s Mrs. Lahiri offer a feeling of family warmth, emphasized by the fact that Uma seems to do a lot of the childcare in this household. Both women balance the male visitors very well, while musician Arun Ghosh plays his own music on stage, especially effectively in the tarantella sequence, here reimagined as an elegant and beautifully poised kathak dance. When Niru’s emotions build-up, she spins out of control and Vasan collapses like a broken doll. Because she will be performing this in fancy dress at a party of white colonials, there is a sense that she has agreed to make herself an exotic, orientalist, spectacle for the pleasure of the imperialists.

In the final scenes, however, as Tom, once so affectionate, becomes furious when he finds out about her forgery, the reality of English-Indian relations is revealed. In one horrible moment, he calls his wife a “savage”, and his suppressed racism comes tumbling out, quickly followed by his selfish joy when he discovers that they have been reprieved and that scandal has been avoided. At this point, Vasan’s Niru grows in moral stature and discovers self-respect and desire for independence that she didn’t know she had. The doll imagery is elaborated and she walks out, leaving the huge doors of the set, significantly un-slammed, a gesture of silence more effective than any noise. This is a most enjoyable and stimulating adaptation of a classic drama.

A Doll’s House is at the Lyric Hammersmith until October 5.