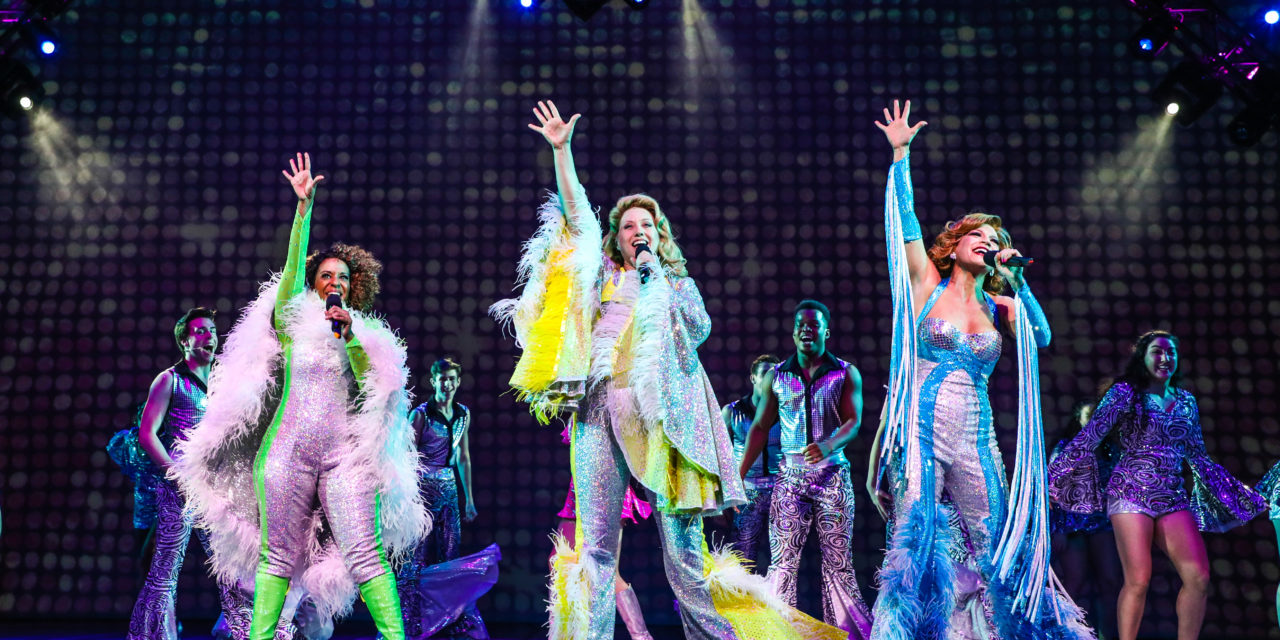 Confession. I love ABBA. For years I kept my Abba-session private. No one needed to know nor did I want anyone to know. But something changed as I transitioned out of my twenties and into my thirties. I stopped caring what other people thought. So, here I am, writing about my love of ABBA and my first time seeing Mamma Mia!, the stage musical comprised of Benny Andersson and Björn Ulvaeus’s hit music. I’m a little late to the party but better late than to never have arrived.

Coincidentally, my guilty pleasure of ABBA spread into my theatre-going habits. For some reason, I always missed the national tour of Mamma Mia! and I wasn’t going to waste a precious slot in one of my New York or London trips to see a long-running musical that would surely always be running. I always thought that one day I’d see Mamma Mia! It just wouldn’t be this day. The pleasure was a little too guilty. Not to mention that I not-so-secretly wished that a stage adaptation of Muriel’s Wedding had been the ABBA jukebox musical we ended up with. Regardless, Mamma Mia! is what we have and, judging by the more than 60 million people who have seen it on stage in addition to both films—Mamma Mia! and Mamma Mia! Here We Go Again—being enormous box office hits, maybe Mamma Mia! is the ABBA musical we always needed even though we didn’t expect it or necessarily want it.

And then something unexpected happened. Mamma Mia! closed on Broadway in 2015 after accumulating 5,773 performances and regional productions soon started popping up all across the United States, just none anywhere near where I was living. Until now. While the national tour of Mamma Mia! has made many stops in Houston, Theatre Under The Stars’s (TUTS) production of Mamma Mia! is the first homegrown production of the musical in Texas’s biggest city. Under the direction of TUTS Artistic Director Dan Knechtges, Mamma Mia! runs February 19 through March 3 at the Hobby Center for the Performing Arts. 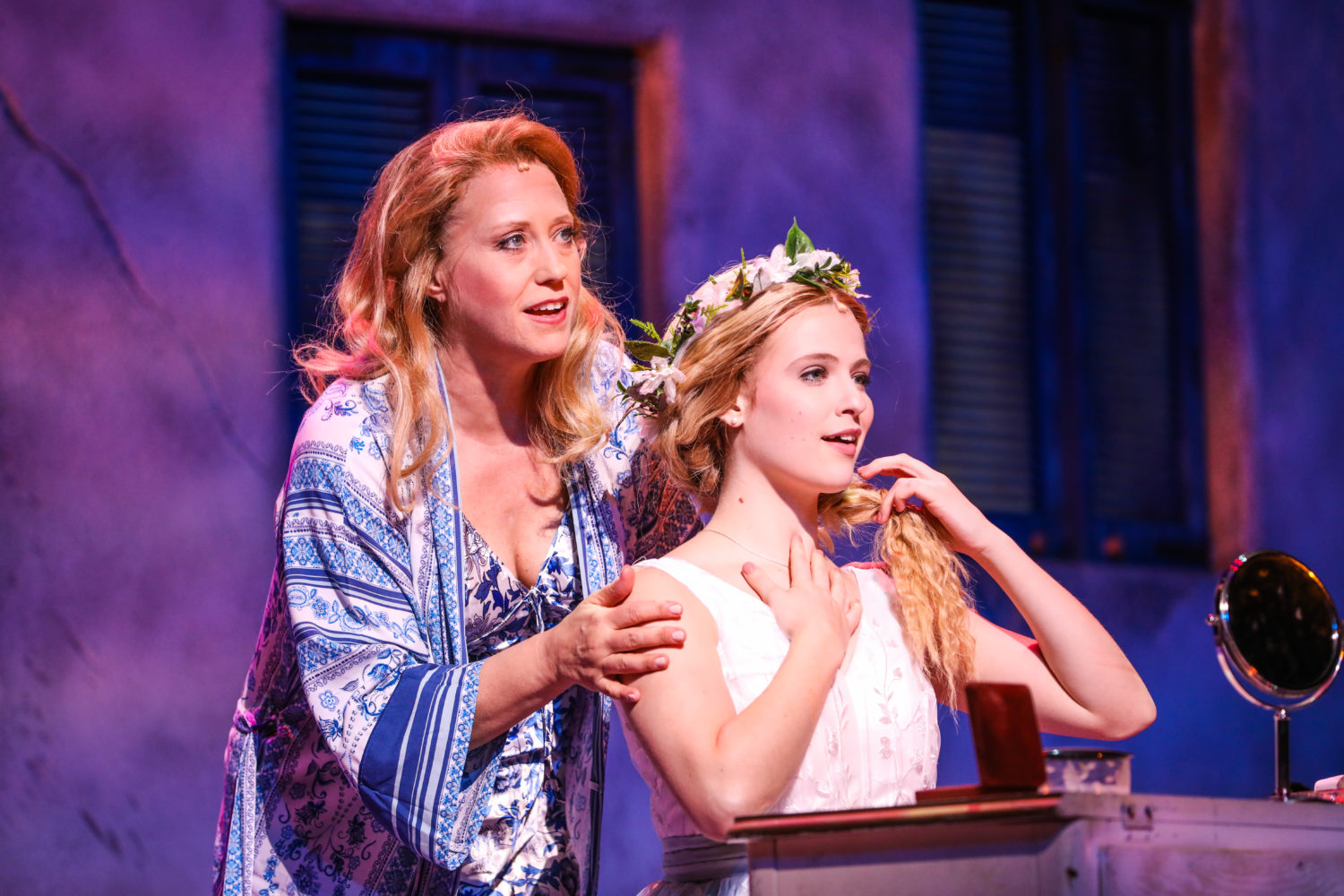 By now the plot of Mamma Mia! has become thoroughly ingrained in U.S. popular culture. Anytime there is the possibility of someone having multiple dads on television, for instance, Mamma Mia! jokes abound (See: 30 Rock). The plot is simple. On the eve of her marriage to Sky, Sophie invites the three men—Sam, Harry, and Bill—who potentially could be her father. As the plot of Mamma Mia! Here We Go Again shows, Donna had a whirlwind love affair with the trio before ultimately deciding to stay on the island and open a bed and breakfast. While Sophie tries to figure out who her father is, Donna embarks on a nostalgic turn that sees her reliving her youth and struggling with her feminist ideals and her attraction to the man who broke her heart. As the wedding guests go on their own individual journeys, they sing nearly every classic ABBA hit from Dancing Queen and Waterloo to Super Trouper and Take A Chance On Me. 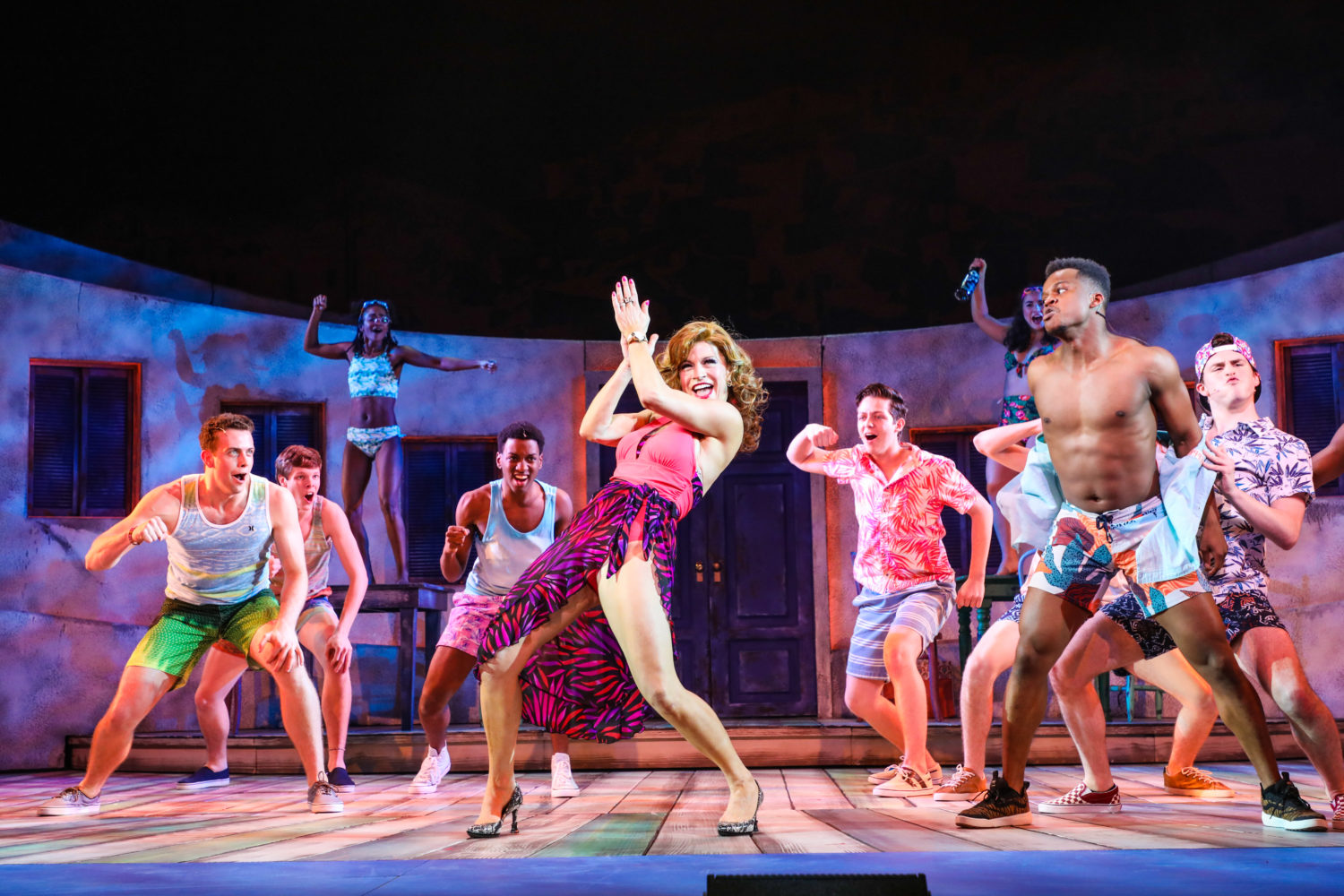 The timing of Mamma Mia!’s stateside arrival should not be overlooked. The musical opened in London in 1999. Historically, West End audiences have been more prone to supporting jukebox musicals. Just look at the successes of shows such as We Will Rock You and Thriller Live, two shows that have never opened on Broadway. When Mamma Mia! opened on Broadway in October 2001 in the aftermath of 9/11, theatre audiences were eager to escape from the harsh reality of living in a country in which fear now encompassed mainstream everyday life in a way it formerly didn’t happen. Despite artistic successes of shows such as Urinetown, The Sweet Smell Of Success, and Tick, Tick… Boom!, audiences, by and large, didn’t want to think or be faced with reality when they sat down in the theatre. People just wanted to have fun. They wanted to laugh. They wanted to forget about all of the bad things happening in the world around them. And Mamma Mia! gave them the show to do just that. Mamma Mia! was a perfectly timed escape into the world of guilty pleasures. Surely few people would argue that the show is high art, but, at the end of the day, does it matter? Does everything have to be Sunday In The Park With George, Fun Home, or Hamilton? It doesn’t and, quite frankly, it shouldn’t. We need musicals like Mamma Mia! just as much as anything else.

TUTS’s production of Mamma Mia! demonstrates precisely why. The musical’s biggest success is the nuanced ways it taps into nostalgia and escapism. And, for me, there is no better escapism than camp. Having worked creatively on the original Broadway productions of The 25th Annual Putnam County Spelling Bee, Xanadu, and Lysistrata Jones, is there anyone in Houston better equipped to direct Mamma Mia! than Dan Knechtges? To be fair, Catherine Johnson’s book coupled with the greatest hits of ABBA does much of the heavy-lifting, but Knechtges’s staging is exactly the type of over-the-top island goof this show needs. Moreover, Jessica Hartman’s choreography finds perfect harmony in Knechtges’s direction. While Donna—a winning Sally Wilfert—sings about the repairs her taverna needs, not to mention the Money, Money, Money she would need to do it, the ensemble pops out of windows and doors to much comedic effect on Timothy Mackabee’s perfectly-designed set. Even small actions such as Blair Medina and Raven Justine Troup perfectly poking their heads out of the doorway are the small details that make for a thoroughly entertaining evening. These moments are sprinkled throughout the production. Fit island boys tap dance in flippers. Sophie and Skye sing about their love while riding surfboards. Donna wields a drill for an entire song. Fittingly, there is hardly ever a moment in which the musical takes itself too seriously. Even touching scenes between Donna and Sam quickly turn into SOS and The Winner Takes It All. No complaints here. 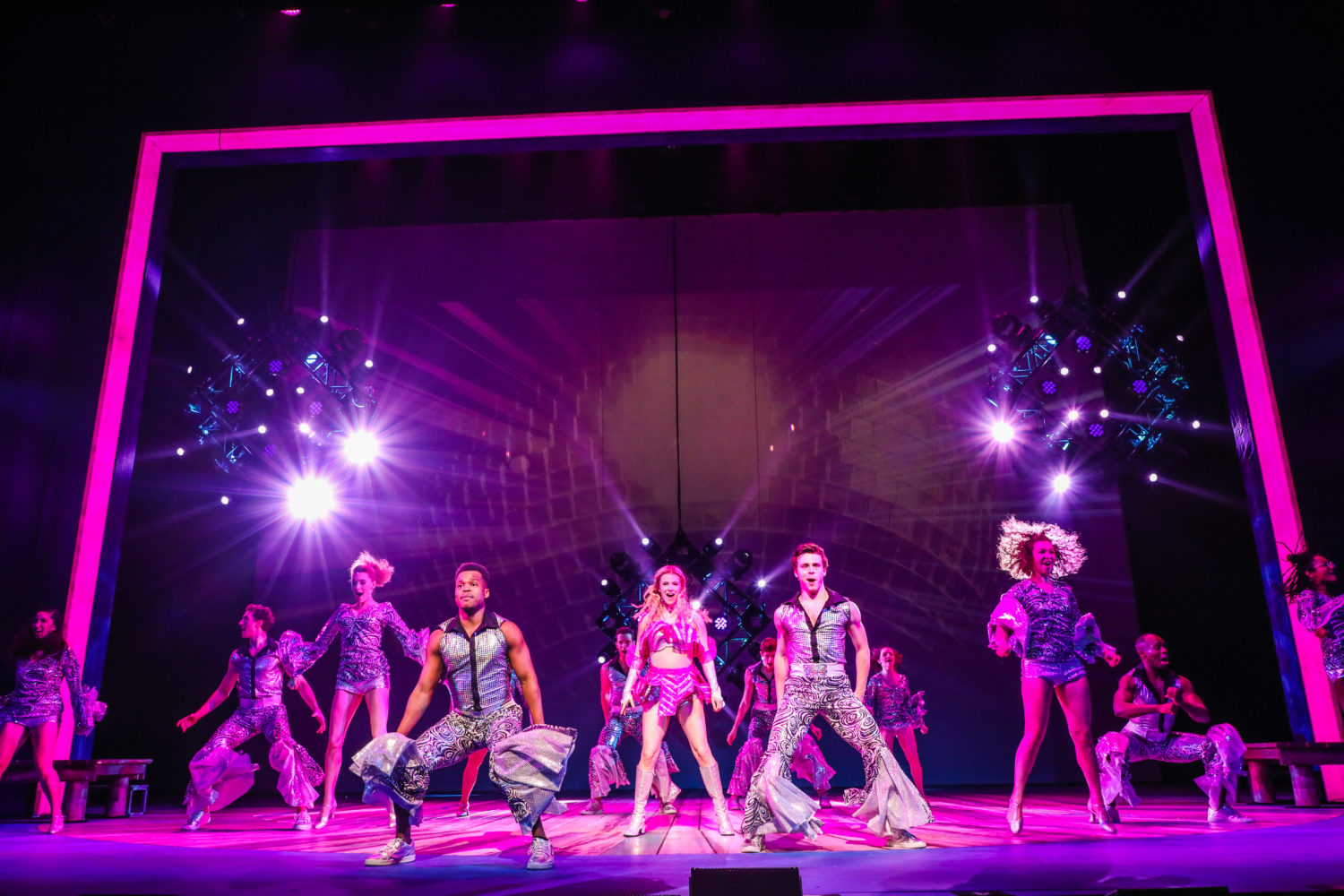 Yet, perhaps the most guilty pleasure inducing moment of TUTS’ Mamma Mia! didn’t even happen during the show. While the musical ends tenderly and quiet with Sophie and Sky walking into the moonlight, the curtain call quickly turns into a mega-mix of your favorite ABBA hits, effectively shaking the audience up and sending them into the night with more energy than anyone needs at 10:15 pm. As the nearly sold-out house of 2,500 audience members danced and sang along to Mamma Mia and Dancing Queen, the roof nearly blew off the Hobby Center when the orchestra started playing Waterloo. When the trio of dads entered in their fully-sequined disco suits, that was all she wrote. As my friend and I left the theatre quite literally singing and dancing, I realized that I never stood a chance. While I could somehow miss the musical for two decades, maybe I wasn’t meant to see it before now? Maybe I needed to first embrace my love of ABBA before I could truly let my hair down and sing Waterloo in the aisles?

Everyone needs escapism every now and then. For some, it might be going to a baseball game. For others, it might be attending a concert. For me, it’s ABBA. Before the show, my friend and I joked about how we play ABBA while we do the dishes. Of all housework, doing the dishes is one of the biggest downers. No question. So, we both agreed that there is no way to make it more tolerable than having ABBA’s infectious tunes beaming through the kitchen. Mamma Mia! does this, but without the dishes, without the kitchen. It’s the best of ABBA. It’s the best of nostalgic escapism. And while it might not be the best for you, it’s certainly the best for me. 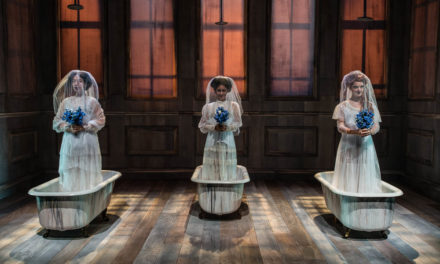