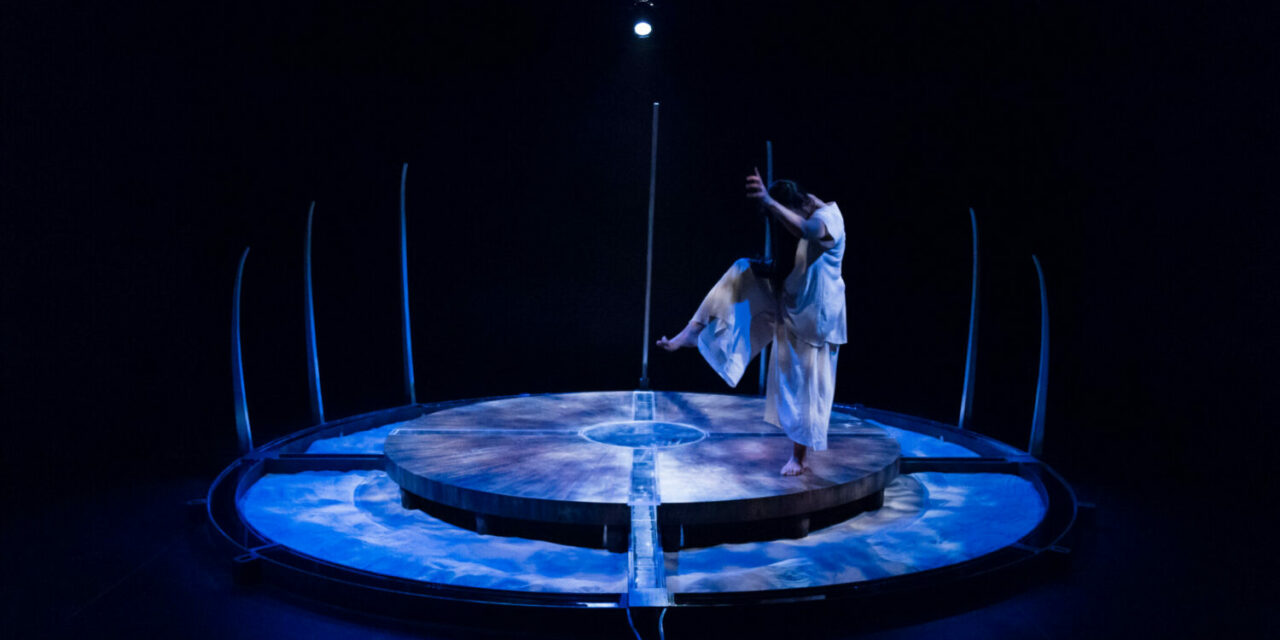 Andy Moro’s striking set greets us as the sky lights up revealing tall, thin curtains covering immense structures suggesting huge redwoods of the BC coast in the shadows. A logger sneaks quietly through this forest with his chainsaw and begins cutting these majestic structures as they scream in pain.

As the forest collapses, a  half-naked woman with long grey hair, her legs covered with red growths – blood? flowers?-  crawls out from under a pile of leaves lying in a circular form on the ground. Bewildered, confused, this spirit creature, a transformed Aunt Shadie, moves through the maimed forest world calling up her daughters who appear on the set, rapidly transformed into a structure that resembles an upper horizontal space suggesting a rooming house, where women occupy a  row of tiny bedrooms. All are enveloped in a sea of changing lights and video designs.

On the ground floor, a public space morphs into a bar, or a dance hall, or a street area or even a barbershop where one young woman at a bar table, seems to be writing or thinking or observing all that is happening. This is Rebecca (PJ Prudent). She tells us she is still searching for her mother who suddenly disappeared 20 years ago and has never come home.

Then again, Moro’s powerful video effects highlight a constantly transforming space that appears to be alive behind and above the structure in the foreground which incorporates the coastline, the interior of the city and even a run-down area where the Vancouver rooming house is planted. The site is split into various moving surfaces that reveal a living place trying to tell us something excruciatingly painful.

This incarnation of a First nation’s space of storytelling progresses neither forward, nor backward nor sideways nor anywhere in linear time. The background is constantly jolted by melting water, by burning growth, by angry spitting fire or by the sudden appearance of dark rolling clouds that rise threateningly over this whole world. These suggest projections of the pain that gripped the female figure who emerged from the ground in the first minutes of performance and continues to observe the whole event.

Then the lives of the women living in these miserable conditions, who automatically respond to the male mantra “can I buy you a drink?”, begin to define themselves. Troubled, forced to leave home, they enter a spiral of alcoholic relief from the horrors of their life against which they have no defense, such as the local barber, a  male archetype who preys on their situation. Pierre Brault becomes a terrifying creature giving vent to his sadistic attraction to young native women.

It all suggests a magnificent poetry on the part of the author Marie Clements and director Muriel Miguel who coordinates the group of women, caught in this pornographic nightmare that splashes their lives across the burning sky, announcing their fate in news broadcast-style: The coroners inevitably decided that these deaths were all “unnatural and accidental”. No one was to blame because the European-based system of justice is incapable of  ‘seeing’  what really happened. This event at the NAC shows us quite the contrary.

As the first part of the evening unfolds, the misery, the sordid state of these dying women is echoed by a hardy beating of the drums, a loud high pitched chanting, as each of the women reacts defiantly making a fist, twisting arms in a fighting stance, expressing some strong emotion as they call out to the spirits to come down to help them reclaim their lives.  Participating in this event we become annoyed, then angry, wondering why this state of affairs has not been solved and why it has been allowed to fester and we want to get out into the foyer of the theatre, breathe fresh air and yell at someone.

Then the dead women have returned from the other world where they meet again in that sordid rooming house which appears to be less sordid now because of brighter lighting, and the determined presence of a young woman who wants to solve the mystery of her mother.

The excitement mounts, there is a playful collaboration which becomes a satisfying act of vengeance followed by a celebratory tea party as soon as the sacrifice is over. As the wind echoes their feelings, the returning spirits lock arms, move in a circle reclaiming their solidarity, chanting, dancing, no longer victims of an ’accident’. They have found their own path back to the ancestors and will be received at home with great ceremony identifying their own personal origins such as the Salish girls, and so many women of other the west coast families.

The Festival continues through the 2020 season with Kiinalik from the North coast in a coproduction by Buddies in Bad Times and The Great Canadian Theatre Company (Jan. 22-February 9, 2020), The Inner Elder with Michelle Thrush, a Gemini award-winning actor, and storyteller, and an exciting cabaret-style performance Hot Brown Honey from the Briefs Factory (Australia) May 5-9, at the NAC.

This article was originally posted at capitalcriticscircle.com on December 14, 2019, and has been reposted with permission. To read the original article, click here. 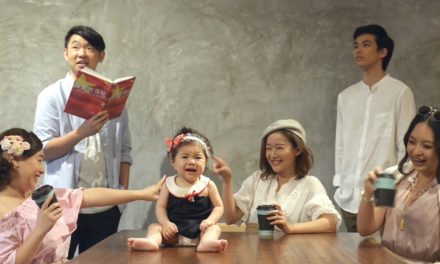