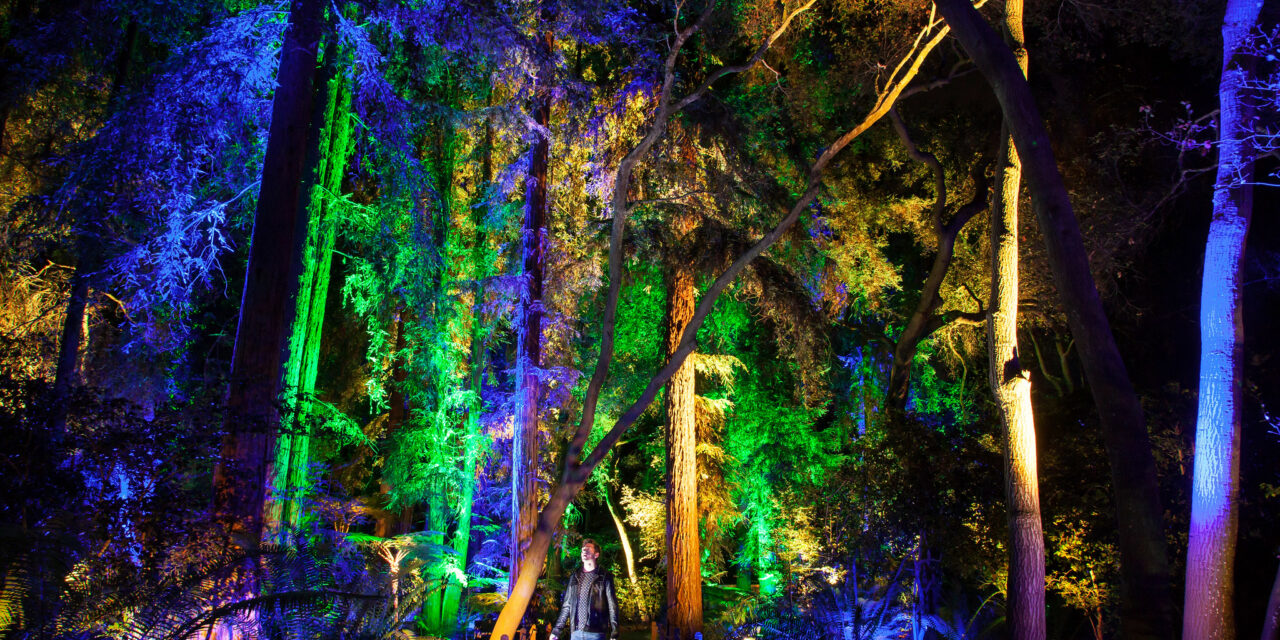 With a background in theatrical lighting, Chris Medvitz is a current Partner and Principal at Lightswitch, a lighting and visual design company whose focus is to offer artistic solutions to their clients’ requests from concerts to immersive light installations. Thus, his works have not been limited to traditional theatre spaces. Some of Medvitz’s best-known works are Enchanted: Forest of Light at Descanso Gardens and the Nintendo E3 Exhibit, both immersive experiences meant to engage the client’s audience.

Throughout childhood, Medvitz was surrounded by performance of all kinds, living near various symphonies, orchestras, ballets, and theaters. “My dad worked for the symphony so I was always around performance. So I was really exposed to that as a kid, but I never really took it seriously until I got to high school,” Medvitz says. Through an experimental environment in his high school’s theatre program, Medvitz felt the freedom to “play around with dated but professional equipment” which led Medvitz to really consider lighting as a career path.

His love of lighting was fostered throughout high school and Medvitz chose to advance his studies of design at the University of California San Diego due to its close partnership with regional theaters. There, with many European professors, Medvitz was taught that design did not have to be confined to just theatre. He explored lighting design within a theatrical environment but was always encouraged to look beyond only theatre to express his designs. Medvitz comments on one of the most valuable lessons he learned at UCSD,

“One of the things they didn’t teach us at [UCSD] was if you aren’t doing legit theatre you’re not a legit designer. That was not part of the mentality there. So there was this whole world of corporate and rock and roll, and all these other things that were a lot more work and a lot bigger budgets and a lot of fun toys. So I sort of said I want to try all of that.” After studying theatrical design at the University of California San Diego, Medvitz was already well connected with professionals working at the La Jolla Playhouse. Medvitz spent the first year after university assisting various designers until he happened to be in the right place at the right time. While newly hired by a company that did auto shows, Medvitz noticed that “suddenly the European automakers decided lighting was going to be a thing…A few other designers and I who were just a few years out of school were being asked to design things that were much more elaborate and much more theatrical.” He laughs as he recalls, “We had no business having that much responsibility or that much budget at our disposal.”

After programming and designing concerts in the music industry and working at George P. Johnson, a large marketing agency, Medvitz found a professional home in Lightswitch. In 2004, Medvitz became a partner in the company and has been there ever since. Lightswitch aims to bring artistic solutions to an endless variety of clients through company standards and collaborative designers. Medvitz explains, “We are artists, but we are commercial artists. We try to deliver an artistic solution to our client’s problem.”

Being a Partner and Principal at Lightswitch has given Medvitz the freedom to focus his studio on works that interest him and gravitate toward projects that he can serve best.

One of these projects Medvitz designed was the holiday light installation at the La Cañada Flintridge Descanso Gardens: Enchanted: Forest of Light.  The objective of this project was to draw awareness to the Gardens, as well as create a holiday light tradition that did not explicitly seem to portray specific holidays.

Medvitz says the gardens requested, “we treat the property not like a venue. We couldn’t create any experience that could be copied and pasted into somewhere else. It had to be specific to the location that it was in.”

Creating an experience through light installations in a botanical garden location posed many challenges. With everything outdoors for months at a time, Medvitz’s team had to be conscious of the instruments they used to ensure they could withstand natural elements while the exhibit was up. Secondly, the team had to respect the garden itself by keeping the preservation of the garden as a priority in their design.

“[Descanso Gardens] wanted to have the biggest impact on the audience with the smallest impact on the site,” he adds, “None of the equipment could be put too deeply in the ground, nothing could be mounted to or hanging from trees, we had to consider neighborhood impact because it is in a residential area, so there were a lot more logistical challenges for that specific project than one that would be held in a more traditional venue,” he adds, “but any project poses challenges of its own.”

Descanso Gardens is structured into many different specific areas such as a Japanese Garden, an Ancient Forest, and an extensive Rose Garden. Medvitz and his team worked with the Executive Director of the gardens, the head of horticulture, marketers, and educators. “We spent literally a couple of days walking through the gardens. We would stand in the space and hear about the space from a historical standpoint as well as a functional standpoint.”  After spending ninety minutes to two hours in each of around ten areas of the garden, Medvitz and his team began brainstorming ideas that would be specific to each area. Pitching a variety of ideas to a client helps Medvitz hone in on the direction the team wants to go. Even if the client dislikes everything Medvitz’s team brings to a meeting, which does not happen often, he still appreciates the feedback, knowing what options they can eliminate. When utilizing color, Medvitz typically likes to limit his color palette. “When everything is turned up to ten, it might as well all be up to five. It’s about contrast.” Medvitz was able to achieve this contrast in Enchanted: Forest of Light by contrasting lights between areas of the garden. For example, Medvitz chose to use bright floral colors when working in the tulip field of lights, “Flower Power,” but in contrast, he used only blues, greens, and yellows in the Ancient Forest, an area of the garden that plants were from a time period before plants would bloom flowers. Therefore, Medvitz explicitly avoided floral colors such as magentas and pinks. Although Medvitz does not expect the audience to pick up on the meaning behind the contrasting colors, its purpose is to create a variety of experiences throughout the garden through different color palettes.

Within the wide range of productions Medvitz has designed for, he has learned how to embrace collaboration with other designers. This is well seen in his contribution to the immersive Nintendo E3 Booths. Medvitz worked with many disciplines of design such as sound designers, set designers, and artistic directors to deliver a specific marketing message targeted at a specific demographic. Medvitz’s lighting team worked with these other areas of design to create a cohesive timeline for the immersive piece. In both Enchanted: Forest of Light and Nintendo E3 Booths, audience members were free to roam around the space as they pleased. Medvitz became faced with the challenge of not being in control of how long people were in each space, and what order they were moving through the space. “If you can’t control where they go, what can you control? You can control the timeline.” Medvitz and his team focused on where guests go in the space, how long they typically would stay there, and then the team created a timeline through programming the lights to run in a certain sequence for a certain period of time. This timeline was created to be much longer than how long the average guest would spend in the space. Thus, Medvitz explains, “If a guest were to go to Enchanted: Forest of Light and then come back another night, they may not experience each area the same way.”

Lighting in a World of Media

Medvitz and his studio have also begun embracing the other forms of media that are entering into theatrical spaces, such as projections and video. Medvitz believes lighting designers began to naturally gravitate toward other media such as projections because they were already used to “taking a set and seeing how we are going to manipulate and change different areas of this throughout the course of the show.” Medvitz anticipates that technology will continue to expand in terms of visually manipulating a space, which is why Medvitz and his peers have begun to discuss projections, live cinema, and other uses of technology as “media design.” His understanding of lighting design as a conceptual process has allowed him and fellow lighting designers to make a smooth transition into this new world of media.

Finding the Light in Tough Situations

At the end of the discussion with Chris Medvitz, he shared a story of the first night his team was installing lights in the Enchanted: Forest of Light space. While setting up the Ancient Forest, “there were a lot of technical objectives, the first year we were doing this. And it also happened to be the night of the 2016 presidential elections.” He continues, “the mood was not great. We moved on, we had one night to throw it together, but we were very distracted and frustrated for all sorts of reasons. And then we came back to it about a week later, and thought, ‘Wow, that really turned out well.’” He reflects on this experience and adds, “It’s always funny, for the small group of creatives that work on the project, there are things we get frustrated with and aren’t happy with, and then we will talk to other people and they will say, ‘What? I thought that was cool!’” 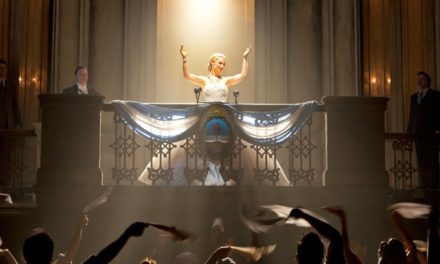 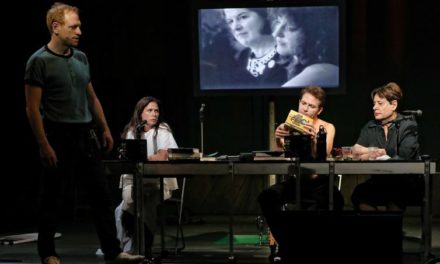