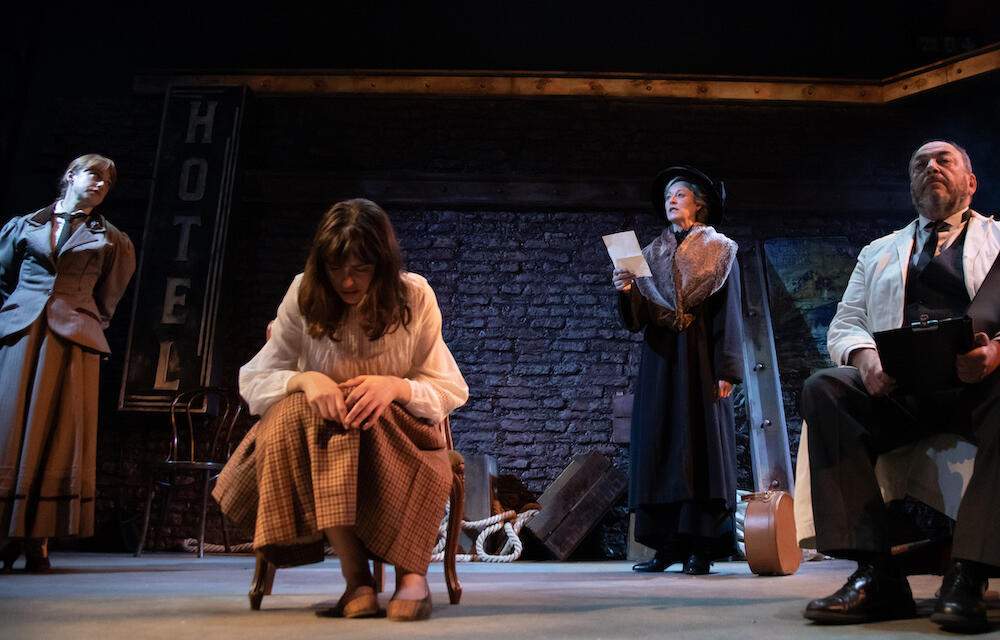 You can’t keep a great playwright down. Ron Hutchinson, whose award-winning stage plays, such as Rat in the Skull (1984) and Moonlight and Magnolias (2005), are contemporary classics, has been absent from view for a while. But although he has fallen off my radar in recent years, perhaps it is because, as the title of his book on writing for a living says, he’s been “Clinging to the Iceberg.” Which is a neat segue into his newest play, Ghosts of the Titanic, which gets its world premiere in a co-production between Park Theatre and Brill Productions. But although it’s an intriguing take on a familiar story, its staging leaves much to be desired.

Everyone knows the story of the Titanic, the super liner which sank in the North Atlantic on 15 April 1912 after hitting an iceberg. But is this common knowledge true, or is it merely the accepted cover up of a much more complicated, and much more troubling, tale? What if the ship’s sinking did not come about because of an accidental collision with a natural object, but was instead the result of a mixture of poor design and commercial greed? And what if this was then the subject of a campaign of misinformation by some of the most powerful men in the United States of America? Wow! What an idea!

Hutchinson’s play explores this central conceit through the figure of Emma Hinton, a young Englishwoman whose fiancé Henry had been part of the doomed ship’s orchestra. Troubled by doubts about what actually happened to him, she decides to come to New York in her quest for the truth. By chance, she meets Molloy, a journalist whose career is on the wane and who is on the lookout for new stories, and together they begin to investigate the accident of the century. Emma hears the testimony of McBride, an exiled engineer who helped build the Titanic, and the differing views of Swanson, a newspaper editor, and Spinks, a feisty Pinkerton detective.

By the end, when Emma is confronted by the psychiatrist Myers, there have been so many plot twists that your brain is literally spinning. Still, in an era of conspiracy theories, such as QAnon in the States, fantastically rich oligarchs and an atmosphere of post-truth politics (just listen to the Kremlin’s news briefings), there is something imaginatively wonderful in Hutchinson’s vision of power: In this story, media moguls, rich bankers and industrial giants are shown to have very good reasons for concealing the truth. And their power and wealth means that they can easily silence anyone who questions their version of reality. Sounds pretty familiar, eh?

Of course, Ghosts of the Titanic is also a story about delusion, and how we tend to accept people at face value. It’s only when we begin to look for solid facts — you know, archival records and documentary evidence — that the con artist or the victim of paranoia can be revealed. The play vividly shows how perceptions can change with each new piece of evidence, and it dazzles the mind with the speed of how new information can be acquired. So yes, it is a fantasy scenario and I am assuming that the situation is meant to be more metaphorical than true to life. As such, it has resonance; as a naturalistic drama, it quickly falls apart.

Hutchinson’s text is a superb piece of craftsmanship, and his storytelling is pacy, with more plot twists than a Harlan Coben thriller. He uses a wealth of cultural and historical references — from Belfast shipyards that exclude Catholics from employment to Freud and the new science of psychiatry — to give the play texture. And his vocalizing of hard-boiled New York talk works very well. The playwright also neatly incorporates exposition and flashbacks into multi-stranded scenes which demonstrate his versatility. But, despite the intriguing nature of this psychological brain-teaser, there is not much drama because every new conflict is defused by every new turn of the plot.

Disappointingly, Eoin O’Callaghan’s production doesn’t really do the material justice. Although Genevieve Gaunt’s Emma delivers a calmly intense performance — and there is good work from John Hopkins as Molloy and Fergal McElherron as McBride — the acting doesn’t really gel into a coherent whole, often seeming quite underpowered, and Beth Colley’s design looks crude and makeshift. The other actors (Lizzy McInnerny, Sarah Ridgeway and Clive Brill) do their best, but some moments are inexplicably played for laughs, and the whole show looks too static too often — as if the complexity of the story has defeated any attempt at a convincing staging. The intriguing first part falters badly in the second half of the evening, but the play does not deserve to sink without trace.

This article was reposted by Aleks Sierz on March 10, 2022, and has been reposted with permission. To read the original article, click here. 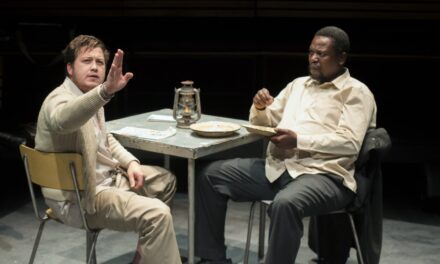