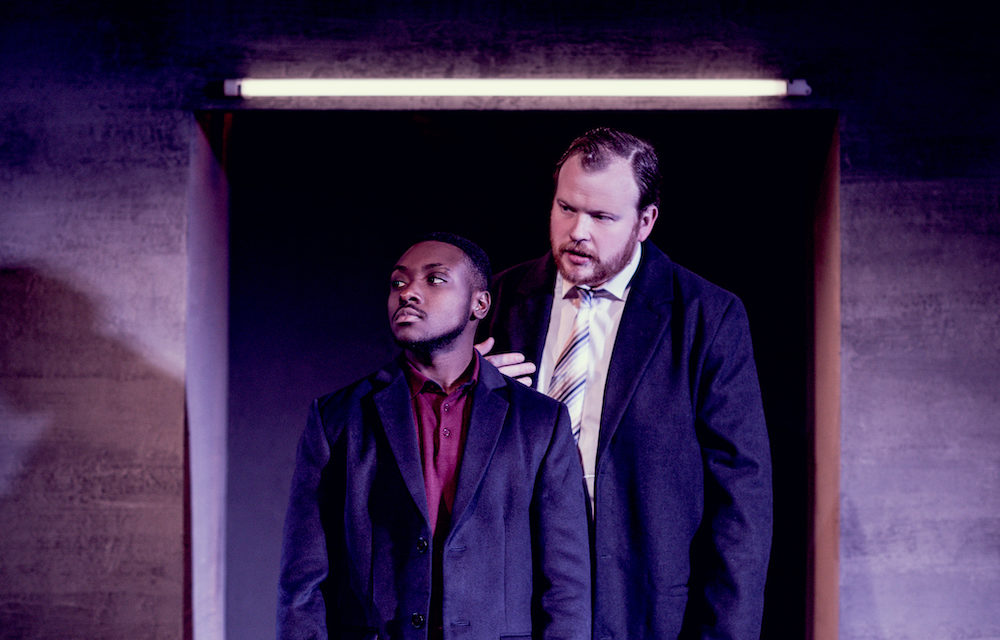 Police stop and search activities—the harassment of young, usually black, men in the streets of our major cities—has been a contentious issue for decades. In 1979, it was the subject of Barrie Keeffe’s brilliant play, Sus, and this racist policy has occasionally been revisited by playwrights since then. But, despite its title, this is not the subject of Irish-Nigerian Gabriel Gbadamosi’s new play, Stop and Search, which instead gives a much broader picture of masculinity, migration and malevolence. But although this 85-minute piece, directed by the Arcola’s artistic director Mehmet Ergen in its claustrophobic studio space, starts off with its throttle fully open, it does eventually run out of gas.

Stop And Search is formed of three interlinked stories, broadly organized into three scenes in each of which a pair of characters interact. The first roars into action as Tel, a white working-class man who drives a Merc and is crossing the Alps in a tunnel deep under Mont Blanc, stops to give a lift to a hitchhiking black migrant, Akim, who is soaking wet and, like Tel, bound for England. As the white man hectors the black man, his anxieties rapidly come to the surface: he is paranoid, aggressive and worried about falling asleep. He is also a crazy driver and Akim, whose job is to keep the wired Tel awake, is clearly worried that they will crash. As the story accelerates, with heady energy, Tel says he’s in the import business, and bringing beaver hats to London, although he may well be transporting other goods.

In scene two, set on Shooter’s Hill in South-East London, we meet another couple of guys, the white Tone, and the black Lee. They are plainclothes cops on a stake-out, waiting for a Merc—with a suspected stash of dangerous goods—to arrive at the house of a criminal’s girlfriend. Once again, Tone is the overbearing white man, with a suspicious love of guns, and Lee is a gentler, apparently transgender man, who could easily play good cop to his partner’s bad cop. In fact, Tone has prostate trouble and his aggressive and domineering manner, his lust for violence, spells trouble. By contrast, Lee says that he joined the Met because he wanted to change the way things are traditionally done: as a black man he knows all about stop and search.

Scene three features Akim from scene one, now working as a cab driver in London, and his passenger, a young black woman named Bev. She wants seems to be heading for Lambeth Bridge, and asks him to take her to Elephant and Castle. But, as a recently arrived migrant, Akim doesn’t really know his way around, and she has to guide him. As a woman on the verge of a desperate act, signaled by the scene’s projected title—Girl On The Edge Of A Bridge—Bev explains her predicament to the sensitive and wise young man. With its predominantly female voice, this is a much cooler scene than the testosterone-heavy previous ones, but as all the pieces of the jigsaw come together the story itself seems to falter, with Gbadamosi substituting his previously allusive style with a couple of much more banal, and in my view unnecessary, explanatory passages.

But although the first two scenes are powered by their images of toxic masculinity, with the white men’s anger and aggression giving the story an enormous injection of sheer energy, it is odd that, until the end, the black characters are given such subsidiary roles. Although the story is intriguing, it’s not easy to see whether Gbadamosi is saying anything of vital importance. While it’s great to see Akim the migrant being much wiser and much more human than his white counterpart, a Brit who is a criminal, I often felt that his voice was not developed fully, and his memories of refugees drowning in the sea or being burnt in flames deserve a much fuller stage presence. As it is, I feel that we only hear a poor fraction of his tale.

That said it would be hard to criticize Gbadamosi’s writing, which has a freshness and energy that is truly impressive. As well as snarls of masculine anger and contempt, there are moments of poetic image and verbal splendor. Full of moments of mutual racial antagonism, Stop And Search presents a picture of Britain as a fractured and febrile place where crime and criminality pervade life. The sexual liaison between a couple of the characters is riddled with betrayal and with bad faith, a metaphor surely for the deeper discontents of this fetid isle. With all this angry belligerence in the atmosphere, who can be trusted to do good? I saw this show on the very same evening that Theresa May lost the historic vote on her Brexit deal in parliament so maybe I was oversensitive to these parallels.

Anyway, Ergen’s powerful production has a suitably gloomy, damp and dreary set, designed by Eleanor Bull, suggestive of hiding under a bridge and complementing the theme of crime and surveillance. His cast brings out the aggression, the humor and the pathos of the piece, with strong showings by Shaun Mason (Tel) and David Kirkbride (Tone) contrasting with the more nuanced, soulful and fearful accounts by Munashe Chirisa (Akim) and Tyler Luke Cunningham (Lee). Jessye Romeo’s Bev gives good support by articulating one of the play’s most chilling lines: “Don’t be old, don’t be young, don’t be sick, don’t be black…” Even if not perfect, Stop And Search is full of very strong stuff indeed.

Stop And Search is at the Arcola Theatre until February 9.

This article originally appeared in Aleks Sierz on January 15, 2019, and has been reposted with permission. 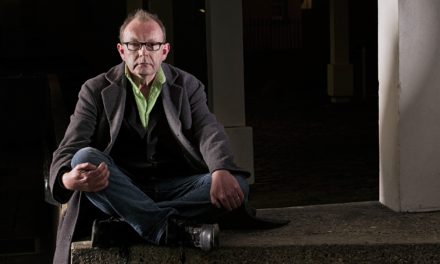