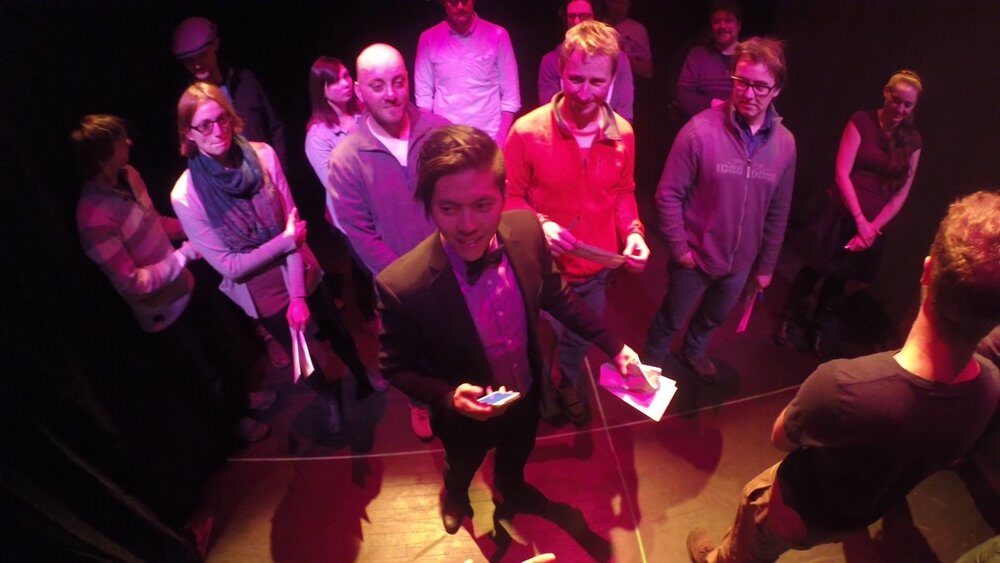 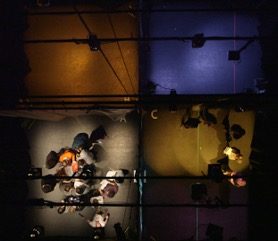 Please, take your laptops out of the suitcase. Liquids in a plastic bag. No belts. No shoes. Little by little, we have given up freedom, comfort, and some rights in exchange for security. Looking at the recent events, the terrorist threat, it seems reasonable. Trusting that someone is keeping us safe, we have gotten used to mindlessly going through security procedures. And yet, there is a sense of uneasiness every time you pass through a metal detector. You are being watched; you are being judged; you could be considered suspicious.

Foreign Radical is a new interactive piece by the Canadian group Theatre Conspiracy exploring security, profiling, and human rights, which just won the Scotsman Fringe First Award. These are hard relevant subjects to approach, but Theatre Conspiracy masters the use of interactivity to burst open the conversation, without ever pushing the audience towards one result over the other.

This is not a choose-your-own adventure type of play, nor is the interactive aspect just a gimmick to engage the audience’s attention but with little consequences on the overall experience. In Foreign Radical, the energy that drives the play is in the interactive aspect. Contrasting with the dark topic of terrorism and national security as a background, the play is structured almost like a game show where the host, played by Milton Lim (Artistic Associate of Theatre Conspiracy), treads the line between approachable and inhuman, fun and devious, safe and deceptive. With questions that leave little room for gray areas, he starts dividing the audience by their experiences, their beliefs, their identities. 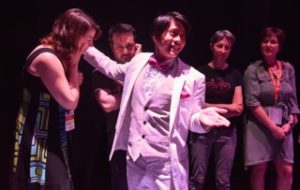 This form of theatrically dividing a group of people was explored by Rimini Protokol in their 100% City projects, where a selected group of a hundred statistically representative people from that city display their demographics, beliefs, and experiences onstage. Tim Carlson (Artistic Producer of Theatre Conspiracy) has worked with the acclaimed German company on several occasions, including the 100% Vancouver. However, different to what happens in 100% City, in Foreign Radical the questions are posed directly to the audiences. The responses are unrehearsed. And so, the play moves forward by Lim carefully activating our own identities.

It takes only one tenth of a second to form an impression about someone. The decision-making process is so fast we are barely aware of the labels, stereotypes, expectations that we can load onto a person in a short amount of time. Sometimes the information we get in that split second is not complete; sometimes that lack of understanding can condemn a person; but, maybe sometimes that fast instinct can hit the nail on the head and save people. For better or for worse, humans rely on these mechanisms. The dilemma starts when institutions also rely on these mechanisms, and only suspicion, not concrete facts or irrefutable evidence, is the only requirement to be included on a terrorist watch list, as it is in the US since 2014. 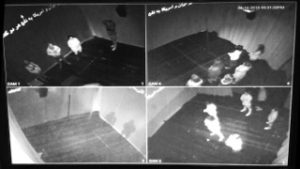 Foreign Radical’s plot revolves around that dilemma. A Muslim man has been detained in customs. Hesam could be a terrorist or he could be an innocent man, and the audience will eventually decide if he is put on the watchlist. But before, they will go through a similar profiling process. Answering questions like “Did you watch online pornography in the last 24h?” or “Have you ever gone to a public protest?” people realize how their behaviors can be labeled, misinterpreted and judged, how our own contradictions can kindle suspicion. There is a constant tension between the personal and the collective; understanding and judging. As an audience member you judge yourself, you judge others, and then you are asked to judge Hesam. The action thus happens inside of each audience member, and therefore it is immensely complex, varied, and personal.

There are no answers, no easy moralizing message to take home. No “we made the right decision.” Foreign Radical provides you with an experience, not a result. You, along with your fellow audience members, have been through something unrepeatable, and yet different for every one of you. The lack of resolution is just a reflection of the impossibility of moral absolutism, and therefore, the absurdity of institutional absolutism. It will echo within you. Next time you go through customs and take off your shoes. No belt. Liquids in a plastic bag. Laptops out of the suitcase.