In Greek and Roman mythology, Medusa the Gorgon is a hideous, monstrous woman with snakes in place of hair who can turn people into stone. But it is surprising that so few of us know or remember that before becoming a monster, Medusa did nothing wrong. As Ovid documents, her snake locks and hideous looks were a “punishment” from Minerva (Athena) for being raped in the goddess’s temple. This much lesser-known another half of the story inspired 27 Degrees, the creators of Medusa, to retell the myth with a different emphasis. After a sold-out run in September 2017 at Crypt Gallery and Thames Tunnel, 27 Degrees brought the show back to the Crypt Gallery, where it was performed September 26–29, 2018. Medusa is a fresh adaptation exploring what it takes for women to become monsters in society, with its immersive and detailed design and poignant, strong, bold performances.

The artists of 27 Degrees define themselves as an adventurous “multicultural collective of artists who create sensory audience experiences in unusual spaces,” and Medusa is a site-specific immersive theatre performance that takes you into the ancient world at the Crypt Gallery, located in the basement of an old church in Kings Cross, London. The historical gravestones and interweaving tunnels provide an arcane atmosphere. The semi-dimmed lighting and the opportunity to buy an alcoholic drink called “Athena’s Poison” with stone tokens further invites the audience to explore the rules of the show and stories that await us. Wandering around, we meet six different Medusas, and we hear snippets of their stories through earphones placed in the corners of their habitats. You can also peep into small, delicate cardboard models of their rooms. The show begins with one member of the audience being invited to read the original version of the myth, followed by one of the Gorgons explaining the guidelines of the show. The atmosphere is light and inviting at the beginning, but as the show goes on, the experience turns darker and darker.

Unfolding the process of how women can be abused and isolated by society, Medusa puts together the stories of six different women whose experiences echo the mythical Medusa’s. Stages of their life are presented in chapters through a range of theatrical devices including puppetry, shadow play, projections, sound installations, and movement. Medusa’s storyline is slightly altered from the myth’s but remains simple: Medusa, once a ravishingly beautiful woman and the aspiration of many jealous suitors, was raped by an attractive man she happened to have a conversation with. However, society put the blame on her and sabotaged her life, and her hatred and frustration turned her into a monster. Eventually, another man killed her and became a hero. The women in the show are rejected by society for different reasons, but, similar to Medusa, they are forced to suffer because they don’t fit with society’s preconceived notions of what women should be like. Their undeserved punishment and isolation are what have filled them with hatred and madness and turned them into monsters.

Addressing rape in the theatre isn’t easy: represented too explicitly, it becomes too much for the audience to watch; at the same time, however, the trauma of the experience deserves to have a place on stage. Medusa’s different devices bring varied shades and emotions to the simple yet heavy story of its title character’s rape, and the show plays with a range of metaphors and different angles. First, we see a paper bird flying off the ground. Its shadow travels across the sky, and the narrator tells us that despite its wounds, it keeps flying. The bird is a metaphor for the wounded Medusa. Then, Medusa herself is given a voice to narrate what happened from the first-person point of view, followed by an ink projection depicting how townspeople burned down her house and ruined her life. The resilience of Medusa as a woman shines through in her gentle narrative, evoking sympathy while keeping the audience at a comfortable distance.

Yet as the show progresses, the audience is pulled closer and closer to the characters. Pain and grievances gradually take over the formerly light-hearted narration. During the chapter called Metamorphosis–showing the moment when these women are turned into monsters–each Medusa becomes consumed by self-defence, anger, and frustration triggered by her trauma. The intense electronic soundscape encompasses us in her tragedy, making it almost impossible for viewers to stay at a distance and remain detached. Gradually, emotions take over logic as the show puts more and more weight on displaying the changes in these women’s inner state through extreme gestures, highly emotional speeches and the obsessive repetition of certain actions. Out of self-defence against the harm and rejection from society, the female outcasts create their own cage and become increasingly aggressive. Witnessing the process, we see that the Gorgons are not born monsters but are forced to live while being labelled “monsters” by a society filled with ignorance and prejudice until, finally, they fulfil society’s preconceptions of them as monsters.

For me, the climax of the show is when the audience is asked to choose one Medusa to stand under a spotlight, almost naked, where humiliating epithets like “cunt” or “bitch” are projected onto her body. A powerful image, it reminds me of how often female victims in society are spat upon by the crowd for mistakes they didn’t make. Then, the audience is given pens to write what they might choose to add–a bold move of audience interaction that creates a memorable moment of suspense before anyone writes the first letter. We are pushed out of our comfort zone completely as we are forced to make a choice: to conform or to defy? It is inspiring to know that the audience has different reactions at each performance. “Usually it really depends on the first commenter,” one of the devisors, Marie, told me after the show.

“If s/he wrote something shaming Medusa, the followers would do the same, and if the first commenter breaks the convention and writes something positive like ‘woman’ or ‘beautiful,’ then the second and third would probably do the same.”

It fascinates me how hard it is to break harmful conventions, even in a fictional world.

After that, the show moves into a chapter of a pure movement called Monster In Action.” Instead of focusing on depicting the outward aggressiveness of the monster as the ancient myth does, the violence of the movement informatively and powerfully expresses how pain and hatred strangle these female outcasts and grow into a part of them. The well-known ending of the story hence becomes ironic when the “hero” comes to the cave and cuts off Medusa’s head, knowing nothing about the monster but that she is dangerous and hated.

But what is behind the titles “hero” and “monster”? The show ends with a chorus delivering the epilogue, reminding us to remember the real story of Medusa. As if waking up from an intense dream, I couldn’t help contemplating how people so often ignore female victims in society and how many real stories are still buried underneath the stories we are told. In many ancient societies, women had no right to participate in politics. Now, women’s rights are increasingly acknowledged and respected in many parts of the world, but news of women being oppressed and vilified is still all too common: in June 2018, a Chinese high school student was silenced after being harassed by her teacher and jeered at by onlookers as she jumped to her death; in the UK, 24 percent of young women fear being fired if they speak openly about being a victim of sexual harassment at work, according to a poll conducted in 2018 by Young Women’s Trust. The show successfully triggered these associations in my mind while giving us time to face representations of the victims’ situations onstage and sympathize with the victims.

Shows attacking gender inequality and patriarchal oppression have grown more and more common in London, especially in fringe theatre productions. What is special about Medusa is that it takes on a sensory approach that creates a direct, strong emotional influence on the audience. It avoids spending too much time verbally specifying the details of stories that we are already familiar with. The narrative, broken into segments that are often told simultaneously through abstract and powerful symbols, leaves a lot of space for the audience to interpret what exactly is happening. This was a problem for me as an audience member, since the limited time and crowdedness made it impossible for me to take in every detail. Sometimes, the view was also blocked due to the narrowness of the space and the size of the crowd, pulling me out of the mood of the narrative. That being said, the performers’ strong performances make it clear enough that as long as there is social bias and injustice towards women, “monsters” will continue to be created and exist among us. I was struck by the sensory experience of the show, and it stayed in my memory, forcing me to think about how silence and conformity can make the victim’s life a living hell while empowering the real perpetrators, and reminding me to be more sympathetic towards disadvantaged individuals and stay firm against harmful conventions and stereotypical views. Overall, Medusa is a bold, poignant adaptation of an ancient myth that alerts us to the pressing gender issues of our time.

Haylin Cai is a Chinese theatre director, actress, cellist, and choreographer. She received her MA in Theatre Directing from East 15 Acting School in 2017 and has worked with artists from China, Europe, and Latin America. She also studied psychology and philosophy as an undergraduate and is curious about interdisciplinary practices in theatre. 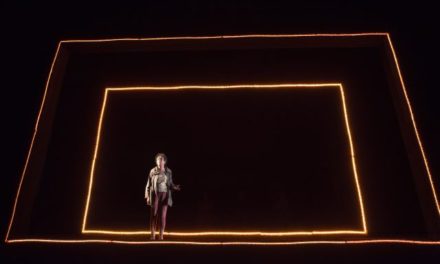