Empty Theaters And False Hopes: The Reality Of VR Film 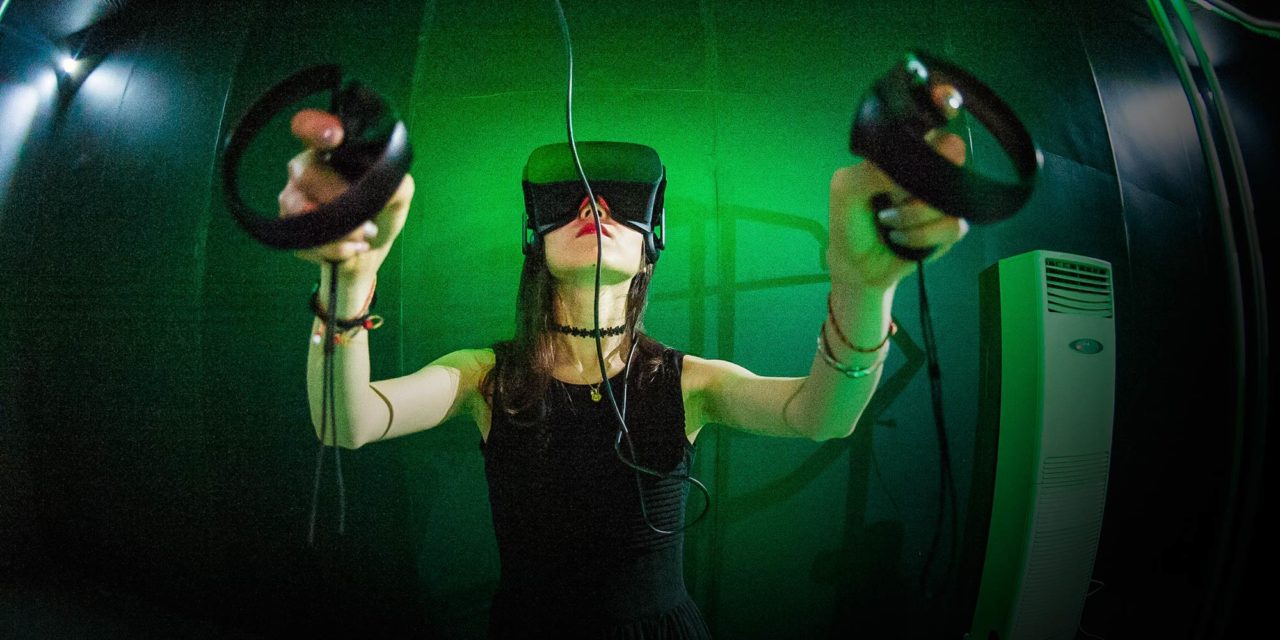 VR film buffs are still trying to crack the code of blockbuster flicks, even now that the hype and cash have left.

SHANGHAI—Li Yaqin is buckled into an egg-shaped chair with a pair of clunky goggles strapped on his head. All of a sudden, the chair starts to spin and vibrate. He leans back and grasps the chair, letting out a yelp: “Oh, it’s happening.”

About 15 minutes later, he takes off the headset and wobbles away. “That was so cool, but it made me dizzy,” the 25-year-old Li said after watching a virtual reality (VR) rendition of Japanese anime Ghost In The Shell. “[It’s] cool — but I won’t watch it a second time.”

Li is one of four customers at the nine-seat VR theater X-Cube in the bustling Yaohan department store one Sunday night in July. Business is lackluster, but the VR entertainment center X-Cube doesn’t have the best location: It’s on the top floor at the back of the building, next to two karaoke booths and a row of massage chairs. Once in a while, curious shoppers check an LED kiosk advertising the available movies, prompting an eager attendant to emerge and try to bring them in for a 10-minute VR film.

Once inside the theater, moviegoers are greeted by blue neon lighting, a large red “X” branded on the wall, and spacecraft-like interior designs. For a price of 30 to 70 yuan ($4 to $10), moviegoers can temporarily retreat from reality and float in space, dive into the deep dark ocean—or even witness a spider viciously killing a ladybug.

But the promise of otherworldly experiences hasn’t been enough to fill China’s VR theaters. There’s no data on the number of VR theaters still operating, but industry experts agree that there are few still in business. Only two years ago, VR was being tipped to change the face of cinema. Technology giants began rolling out the first crop of serviceable consumer VR headsets which allowed consumers to turn their heads, taking in a scene from all angles. China was still expected to become the world’s largest VR market by 2021 with a revenue of 79 billion yuan, according to a report last year by market research company iResearch; Chinese consumers have also shown a stronger willingness than their Western counterparts to go out and purchase VR devices or experiences. Despite all the positive signs, industry frontrunners have struggled to make a profit, grappling with a lack of funding, shortage of talents, and—perhaps worst of all—only moderate interest from film lovers.

Back in 2016—dubbed the year of VR—there was little sign of the difficulties to come. Film production companies and studios around the world began working on VR films, emboldened by the maturing technology. Chinese internet giants poured money into dozens of global and domestic startups and brought on developers to make their own VR content. In the first quarter of 2016, venture capital investments in China’s VR sector totaled $1.1 billion, according to California-based consulting firm Digi-Capital.

“Investors in China are like locusts,” said Eddie Lou, who founded up-and-coming Beijing-based VR production company Sandman Studios in 2016. “Once they spot an opportunity, they lose their minds. They don’t care if the technology has matured or not. They don’t even care what the technology is: All they care about is how to inflate the value of the industry.”

But by the end of 2016, the swarm had moved on, and the global VR film hype had faded. As with VR theaters, production companies soon went out of business as moviegoers showed little enthusiasm and investors pulled their money. “I can count on my fingers: Only five VR film companies still exist today,” Lou told Sixth Tone.

From the outside, the VR film industry still seems pretty bright. In June, Lou organized China’s first independent VR festival—the Sandbox Immersive Festival—in eastern Shandong province’s coastal city of Qingdao. During the five-day event, industry players were able to watch 44 international and domestic films—many of which had their first screenings in Asia—in a tent set up on a marina.

Lei Zhengmeng, who was a panel speaker at the film festival, quit his high-flying job at Alibaba to co-found Beijing-based VR film company Pinta Studios in 2016. In less than a month, Pinta raised 6 million yuan. Despite the enthusiasm at the festival, Lei compared the experience of VR filmmakers to the once-impressive early mobile phone owners. “It looks cool on the outside, but only we understand the hassle.”

The reality—so to speak—for VR content creators is that they’re stuck in a vicious cycle. Since late 2016, funding has dwindled for VR films, which means there’s limited output. The lack of new films means there’s not enough new content reaching the VR film theaters to keep consumers coming back. The lukewarm market, in turn, dampens investors’ enthusiasm for pouring resources into the industry, which only exacerbates the funding problem.

Chinese VR filmmakers have a harder time securing funding than their Western counterparts who have access to government funds, deep-pocketed headset manufacturers, distributors, and universities—and are given a longer production time, as there’s less pressure to make quick money, Lei said. To make ends meet, most Chinese VR studios must rely on making commercials for corporate clients such as carmakers and real estate agents.

“We are always under pressure to think about how to monetize content, but Western filmmakers are less constrained by money, so they can freely experiment with their ideas,” said Lei.

There’s another problem: talent. Since the investment cooled, many VR film studios have had trouble attracting creative expertise—namely engineers and directors. Some tried to bring in engineers from VR game developers, but found they were unable to afford their high salaries.

“Right now, gaming is probably the most profitable subcategory in VR, because gamers are usually early adopters when a new technology arises,” said Sandman’s Lou. “That also means game developers are paid more.”

Games also have the advantage of being able to be consumed multiple times, unlike films which most people—Shanghai-based VR moviegoer Li included—will only watch once.

Zhao Linuo, a postdoctoral researcher at Beijing Film Academy who was invited to the film festival, said that technology-wise, the VR industry is promising.

“All this technology—virtual reality, augmented reality, and mixed reality—open new doors for storytellers.”

But she agrees that experienced talent is a problem.

“There are not many experiences from which VR content creators can draw lessons,” said Zhao, adding that most VR films on the market are just short stories around 15 to 30 minutes long with simple plots, though there are also longer ones available.

Nevertheless, there are bright spots in the industry. While the number of companies has sharply declined in the past two years, the quality of VR films has also drastically improved, said Lou. Last year, three VR movies made by companies from the Chinese mainland—including Sandman and Pinta—were nominated for the Venice International Film Festival’s inaugural VR section, which includes awards for best VR, best interactive content, and best linear story. Last month, three more Chinese titles, two of which again were produced by Sandman and Pinta, made it into this year’s festival, which will be held later this month.

“The winner stood right behind me on the red carpet, and we chatted a lot. I felt like Pinta was only one step away from the Golden Lion,” said Lei. “When it comes to aspects of the traditional film industry such as animation and special effects, Chinese filmmakers lag over five years behind Americans. But now with VR, we’re at the same starting line.”

Lou, too, sees the challenges as an opportunity for Chinese filmmakers.

“Everyone is figuring out the question of how to make films with VR and still make money. Even if you throw the question to prominent Hollywood directors, there is no guarantee they can pull it off,” said Lou. “So, everyone is at the same level…All we ask for is a bit confidence, patience, and time.”

This article appeared in Sixth Tone on August 10, 2018, and has been reposted with permission. 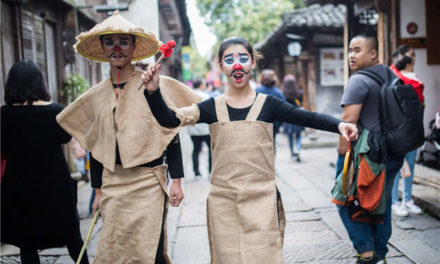 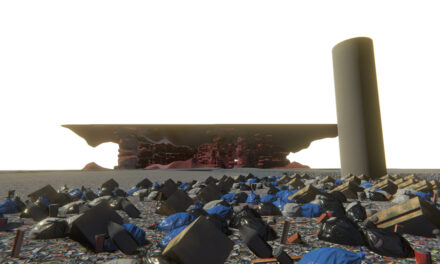