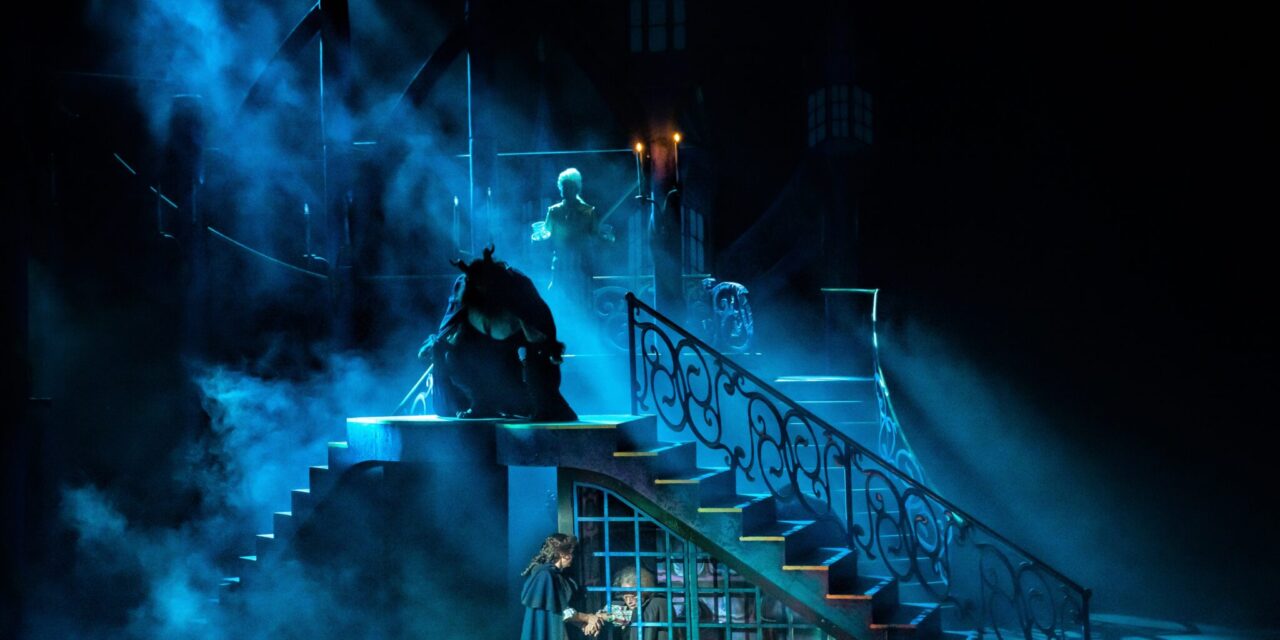 I complete my three-part series on designing for Tuacahn Amphitheater with the lighting designer for the theater’s production of Disney’s Beauty and the Beast, Cory Pattak, from his apartment in New York City:

Colden Lamb: What was the first show you designed at Tuacahn?

Cory Pattak: The first show I designed at Tuacahn was Disney’s Newsies in the summer of 2017. I believe that the advantage to doing your first show somewhere new is that you don’t have to know all the rules and you don’t necessarily know how things are “usually” done. This allows you to design with an open mind and dream big, that’s what Newsies was.

CL: How is designing for Tuachan different from designing in a regular jewel box theater?

CP: It is both the same and completely different. When I say exactly the same thing, the creative team and I still ask ourselves to produce the same quality that we would as if we were in a traditional space. It’s completely different, because of all the ways that make Tuachan a different venue such as the absence of a fly system and the reduced over-stage hanging positions for lighting fixtures. I still have to figure out how to make everything on the stage, from the set to the actors, look well sculpted and crafted, all the things I would normally do.

Another thing that makes Tuachan different is the hours in which I do the majority of my work. Because it is an outdoor theater space, I can only light the show in the dark of the night. I have a fixed number of dark hours to get the show ready which means I really have to utilize my time in order to get the show fully lit by the first performance. For that reason, I come into these shows at Tuacahn even more prepared than other productions I would normally work on.

CL: What did you learn from your first experience that helped you for the next time you designed for Tuachan?

CP: When I lit Newsies, it was probably the biggest show I’d ever designed up until that time, in terms of scale. As I’ve gone on to do other large shows in other theaters, I have honed the skills needed for grand scale musicals by working at Tuacahn. Beauty and the Beast was my fourth show at Tuacahn and I still continued to try to re-invent the space in addition to finding new ways to make the experience exciting for the audiences there. To help with the sheer logistics of a show this size, I keep a daily diary of what we got accomplished on any given day and where I was in the process. Therefore, when I work on another show the following year, I can make sure we are staying on track and not falling behind schedule.

Another thing I learned in particular at Tuacahn was putting a lighting emphasis on the floor of the stage. Due to the way the amphitheater is raked, for many audience members, the black rubber surface of the floor is essentially a huge backdrop with no texture, it’s just a flat surface. I find that I spend a great amount of time keeping the floor interesting through the use of ever changing colors and textures to ensure the actors do not get swallowed by the black nothing-ness of the stage. CL: Is there any difference in lighting Tuacahn compared to designing a rock concert?

CP: In a venue of this size, I do think you have to find a way to create the same energy and scale as a rock concert simply because small gestures you would do for a regular indoor theater wouldn’t read on the 100 feet wide Tuacahn stage. Where one might turn on a light in a normal theatre, you have to turn on six lights at Tuacahn to get the same impact. Furthermore, I try to find ways to include the audience in the storytelling experience. I might implement this by having the lights spill into the audience and using sweeping movements of the lights or blinders in order for strong moments that need to land and have some extra power behind them. This is not unlike the other kinds of spectacle-based shows you’d see such as a Cirque du Soleil production or an opening ceremony for the Olympic games.

CL: Can you discuss lighting the gigantic canyon mountain behind the stage and how you use it in order to enhance the story?

CP: The logistics of lighting the canyon wall has not changed much since I’ve been working for that theater, however it is something my fellow designers and I have been trying to actively change for the future to make it even bigger and brighter. When I choose to light the canyon, it is to make a big gesture and it’s something I don’t treat lightly because it’s an attention-grabbing choice to light the surface of that large mountain. In the audience, there are repeat attendees who know the mountain will light up at some point, as well as first-timers who have no idea it’s coming. I always try to keep those two groups of people in mind when deciding on the most impactful moments to light up and reveal that mountain. In Newsies, for example, it was obvious it would be the Act One Finale, “Santa Fe,” when Jack Kelly is imagining what his life could be like out west. In Beauty and the Beast, I lit the mountain for “Belle (Reprise)” when, like Jack Kelly, Belle sings about wishing to venture outside her bubble, “in the great wide somewhere”. There are other times I use the mountain as a surface to take patterns or other images. At the end of Act One in Beauty and The Beast, I project clouds and a moon on the mountain to create a sky high above the Beast’s Lair. During the title number, the mountain and stage are covered in stars to create the illusion of an infinite starscape, achieved through a combination of lighting, front projection, video screens and lasers.

For every show at Tuacahn, I will always talk to the director about getting the most bang for our buck with these types of effects. We only have so many tools in our bag of tricks so we have to spread them out throughout the night. When and how we choose to light the mountain is a prime example of that. CL: How did you go about designing Beauty and the Beast and what inspired your color pallet?

CP: The set is always the starting point for me and I drew inspiration from the set’s magical blue and purple colors. Knowing that this one unit set would not change throughout the course of the evening, there were discussions on how to make the set flexible between going back and forth from Belle’s village to the woods to the Castle and so on. I was able to do that with colors, texture, angles and deciding when to highlight parts of the set and when to let other areas recede into the background.

Obviously when Maurice arrives at the castle it’s dark and scary, however, when Belle’s presence starts to infiltrate the castle, the lights begin to introduce warm and welcoming colors. By the end of the show when the Prince is restored to his former self, the castle bursts with technicolor. CL: What was your experience like designing and doing tech under COVID protocols?

CP: Ultimately it proved to be less of an issue than I thought it was going to be. That being said, I feel the experience would have been different if I were in an indoor theater compared to a spacious outdoor amphitheater.

The cast, crew, creative team were all vaccinated, being tested, wearing masks and I was not getting too close to the cast, which was not hard because I’m generally far away from them anyway. Aside from that, everything was pretty much the same. If you were to ask the cast or the director, they went through a lot more regulations in terms of rehearsing and singing. From my side of the table it was not that different than usual and I was grateful for that.

CL: Tuacahn Amphitheater is located within the Southern Utah desert and can get extremely humid during the summer. Does that have an effect on the lighting equipment you use?

CP: As you can imagine, lights outside in the heat can get beaten up more than lights inside a regular theater so the lights have to be replaced more often. We’ve also been moving towards outdoor-rated lights and each year we’ve been adding more and more of those lights into the rig, replacing lights which were not really meant for the harsh climate.

CL: What was your relationship like with your fellow designers, Adam Koch and Steven Royal?

CP: I have worked with Adam and Steven for over a decade now. There’s a lot that goes unsaid between Adam and I due to the fact that we have done so many projects together, we don’t even need to talk about every detail beforehand. I know how Adam likes his scenery lit, he knows how I like to light scenery and we kind of design for each other.

With Steven, there was a lot of discussion about the video for the show and how we could make our worlds of video and lighting come together. For example, in the production number, “Gaston”, I pulled colors out of Steven’s video projection for my lighting design. Other times Steven would take his video, such as the scene within the library, and color match it to what I was doing.

CL: Anything you wish to discuss or mention about your experience with Tuachan?

CP: Tuacahn Amphitheater was one of the first big Equity theaters to have returned. Although theater companies have been producing throughout the pandemic, Tuachan was one of the first with no masks that wasn’t a concert staging or any other kind of Covid-adjusted performance. Beauty and the Beast was exactly the same show audiences would have seen in the summer of 2020. I personally think we all felt a responsibility to get it right because we knew other regional theaters were looking to us. We wanted to make sure we were setting a good example for other theaters around the country as to how producing theater could be possible at this time.

I will say that the Tuachan management worked really hard with Actor’s Equity and with local health authorities to keep everybody working on Beauty and the Beast safe. There was a really robust infrastructure for ensuring we could do our work as unencumbered as possible, so I would give a lot of credit and thanks to the Tuachan staff for working together to make this season possible. 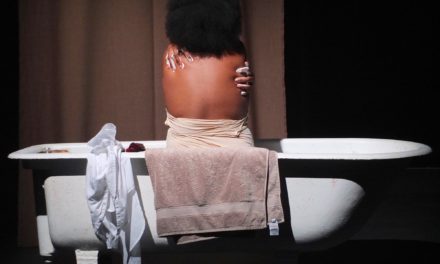 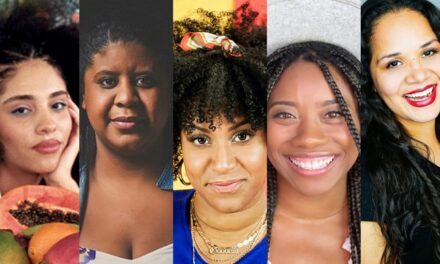