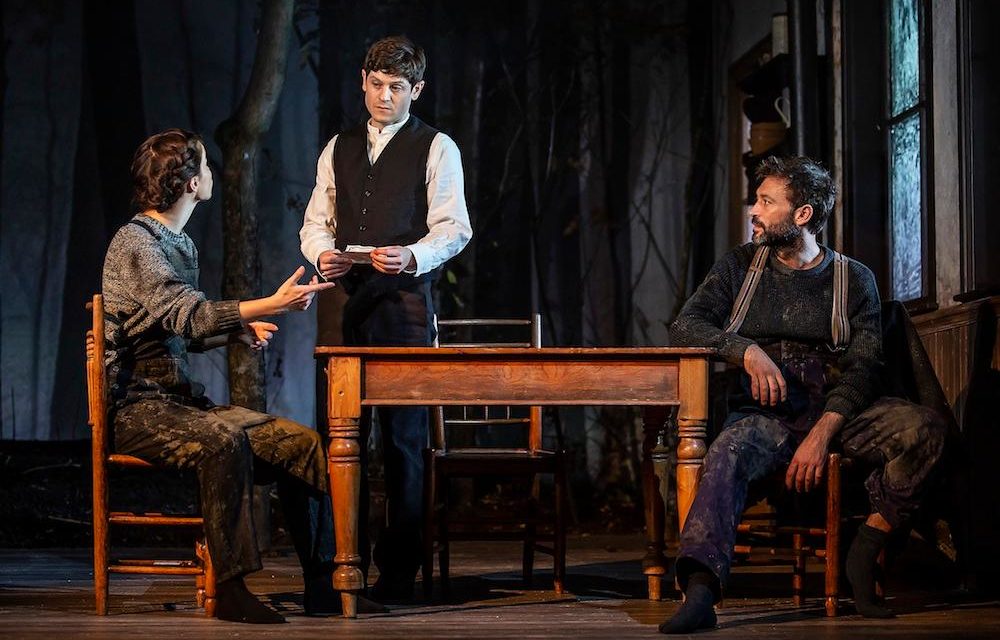 Is appearing in the West End a rite of passage for Game Of Thrones stars? In the past couple of years, Natalie Dormer has been in David Ive’s Venus In Fur, Charlotte Hope in Sam Shepard’s Buried Child, and Gemma Whelan was at the Old Vic. At the moment, other Westeros and Essos are hard to avoid: Indira Varma is in Eugene Ionesco’s Exit The King, Jonathan Pryce will be in Florian Zeller’s The Height Of The Storm, and Kit Harrington in Sam Shepard’s True West. And you can also catch Maisie Williams in I And You at the Hampstead. Last week, Iwan Rheon—Ramsay Bolton in GOT—opened in Foxfinder. All this is good news for star watchers, but how did Rheon perform in screenwriter Dawn King’s award-winning dystopian chiller?

The story takes place on Samuel and Judith Covey’s obscure farm in a distant corner of the countryside. The family is struggling with domestic problems: their only child has died in an accident, they are drifting apart as a couple, and they are unlikely to meet their annual quota of crop production. And the constant rain is flooding the farmland. When William Bloor (Rheon), the foxfinder of the title, arrives to investigate a suspected contamination on their land we understand that the government is using fear of foxes as an excuse to dominate the population, with farms required to achieve food production targets—or face investigation. The paranoid political atmosphere is reminiscent of a Soviet bloc country from the bad old days, with additional suggestions of 17th-century witch finders.

As William makes his presence felt, King gradually reveals more and more details about this science-fiction scenario. Because of government propaganda, in the minds of the population, the fox has become a symbol of all the bad stuff in the world. Foxes spread disease, they spoil crops and they kill children. A contaminated farm must be repossessed and cleansed. Any farmers who fail will be deported to a city and forced to work in a factory, where their life expectancy is cruelly curtailed. Any dissidents, who dare to question the ubiquity of the fox threat (by spreading subversive leaflets for example), are likewise sent for re-education, while the foxfinders—specially trained in seminary-like institutions—are a fanatical cadre, ideologically pure and puritanical in psychology.

The ideas in Foxfinder have a haunting coherence and a great imaginative hinterland. Shadows of Arthur Miller’s Crucible, with its psycho-sexual panic and religious repression, and George Orwell’s Nineteen Eighty-Four, with its Newspeak and social regimentation, are clearly visible. The complete absence of real foxes, used by dissidents to prove that their threat is a politically engineered manipulation, is explained by using a form of Doublethink: “The absence of the beast is a sign of its presence.” As William flagellates himself to subdue the promptings of his own flesh, while putting the relationship of Sam and Judith under intimate cross-examination, we get a strong sense of the psychological underpinnings and double standards of fundamentalist religion. Belief is not a good thing.

Within this strongly and coherently imagined social dystopia, Samuel and Judith come across as a couple who have been devastated by the accidental death of their young son. King not only paints a sympathetic portrait of a marriage under immense strain, but also shows how the ideology of power—articulated of course by William—might both exacerbate and alleviate personal grief. If you can’t accept the idea of an impersonal accident and don’t want to take responsibility for the care of your family, then blaming the fox, a kind of universal scapegoat, seems like a plausible idea. The situation is further complicated with the female friendship between Judith and Sarah Box, a neighboring farmer. And when William begins to investigate Sarah’s property, the spiral of mutual surveillance and denunciation intensifies.

Clearly, the parallels with the world today have some resonance. In an era of populist politics, the idea of conspiracy theories, the fear of a deep state, and the cynical use of fake news gets an echo from the play text, which is aptly amplified by current concerns. The preference for alternative facts over evidential truth snakes through the regime at the frosty heart of this story. If the constant rain is, after one of London’s driest summers on record, almost a case of wish-fulfillment, the intellectual twists and turns that the minds of characters take seem oddly familiar at the time of the great Brexit debate, which—as in the play—requires a lot of mental acrobatics. And, who knows, the play’s idea of food shortages might even be a terrible prediction of trouble to come.

King’s play won the Papatango New Writing Competition in 2011, hosted by the Finborough Theatre, where the drama first premiered in that year. It is a simple story that is neatly told, although it does lack any unexpected twists. There’s a predictability in the events that saps some of the power out of the playwright’s vision. But the main problem with this revival is that it seems to be more concerned with commercial success than with artistic integrity. Rachel O’Riordan’s production, which has a suitably atmospheric design by Gary McCann (helped by good lighting and sound from Paul Anderson and Simon Slater), moves rather slowly (two hours) and has a completely unnecessary interval which sucks much of the pace out of what should be a 90-minute claustrophobic story.

And then there’s the casting. I have no objection to choosing Rheon as William, but although he imprints the role with a pale, almost sickly, hue of cold fanaticism, his performance is neither charismatic nor varied nor big enough to be completely convincing, and he lacks energy. By contrast, Heida Reed (from Poldark) and Paul Nicholls as the Coveys offer detailed and much more watchable readings of their characters. They are also well supported by Bryony Hannah as Sarah. Obviously, there is nothing wrong with using a star name to revive a solid piece of new writing in the West End, but it feels as if the commercial imperative here has overwhelmed a play that might have had a much more successful revival in a smaller new writing venue. At the Ambassadors, Foxfinder exudes plenty of atmosphere, but lacks dramatic punch. When O’Riordan takes over as artistic director at the Lyric Hammersmith after Sean Holmes leaves in October she will need to do much better than this.

Foxfinder is at the Ambassadors Theatre until January 5