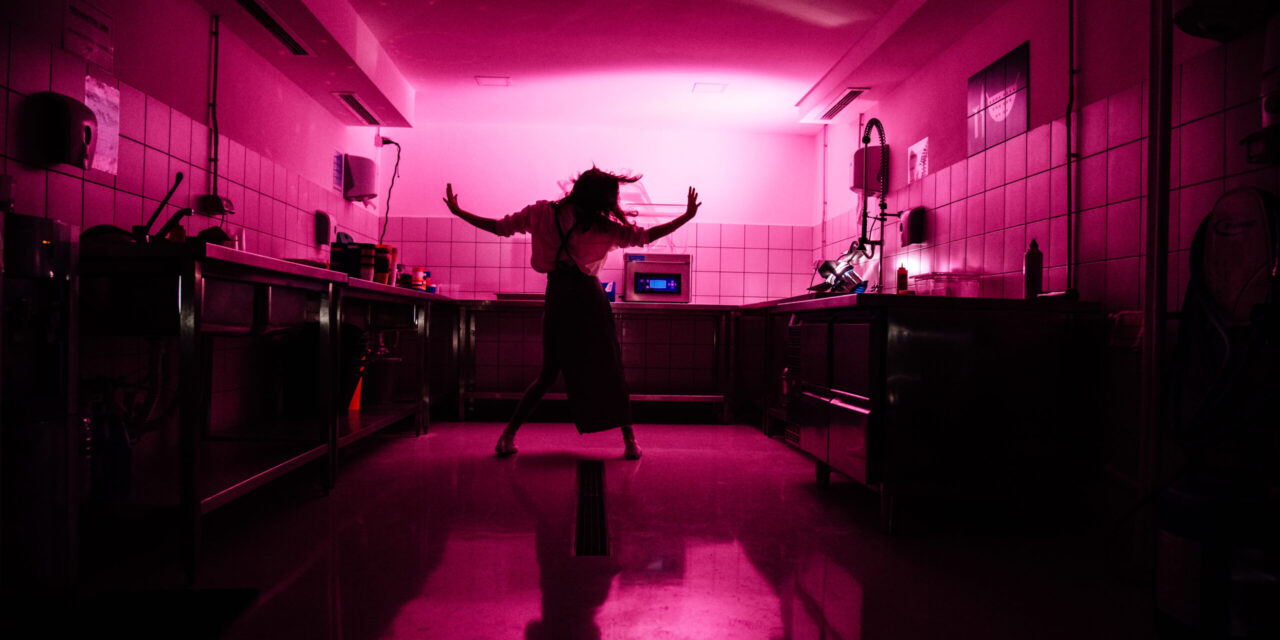 The kitchen has long been a significant trope in our civilization. This began in ancient fires and evolved to modern hot plates, which provoke questions of who we are as society, how we stay together and keep safe, where the boundaries between private and collective intersect, what are our current gender norms, and many others. These have all been boiling for centuries. From August Strindberg’s emblematic play Miss Julie to the famous Kitchen Debate between Richard Nixon and Nikita Khrushchev during the Cold War (to mention just a few of the most obvious examples), the kitchen has been a tempting symbolic arena, provoking our cultural and artistic imagination.

In the end of February, when significant parts of public life were closed in Bulgaria due to the pandemic, one young artistic team took its turn to step into this field with the theatrical production Kitchen. Choreographer Kosta Karakashyan and director-dramaturg Antonia Georgieva teamed up with the accomplished chef Alexander Tsekov, to offer their sight-specific, performative journey through the real-life kitchen facilities of HRC Culinary Academy in Sofia. The narrative they construct in the piece seems to be situated between two recent trends. On one hand, in more general terms, it touches upon the process of professionalization of cooking and its transformation into a prestigious culinary art. One of the latest culminations of this process that we witnessed in the last couple of decades is the popularity of reality TV formats, taking the audience behind the scenes to see the passionate relationships in high-profile restaurants, that they otherwise only visit as customers. This romanticizes the competitiveness and action-driven heat in the everyday life of cooks and restaurant personnel, which is also reflected into Kitchen’s aesthetics and overall approach. What is more, cooking has become a favored activity for many people across the globe during the pandemic since they needed to stay home. As a result, interest in the professional kitchen and its secrets skyrocketed, leading to bursts of new subscribers to cooking channels, enrollment in cooking classes and a wave of homemade videos of preparing a household’s favorite dish appeared online. Curiously, many performing arts institutions also chose to “keep in touch” with their audiences during lockdowns though social media videos of their actors and dancers cooking at home.

Mixing up these two recent concepts, Kitchen aims to tell about the multi-faceted and often-heated atmosphere in the kitchen, where many people with different roles and position interact, but remains hidden. To that purpose, the six audience members, who can see the production each time, are invited to take their seats at the culinary academy’s restaurant and look at the menu. Yet, instead of being served their dinner, the guests find headphones on their plates and are invited to follow their waiter behind the curtains. Among the academy’s large shiny counters, cupboards, sinks, refrigerators and cooking equipment adjusted by the set designer Boris Dalchev, dancers Alexandra Talyokova, Iskra Daskalova, Krastyo Metodiev, Yanitsa Stankeva “dance out” the relationships and the emotions they imagined to be filling range of rooms, from the enormous to the tiny, that constitute this universe. One intriguing approach applied throughout the piece is that the composer and sound designer Georgi Atanasov generates music on the spot that follows the movements of the dancers. Further, it can only be heard by the audience on their headphones so the dancers actually perform in silence. This choice is another way for the creators of Kitchen to emphasize their message that there are two parallel realities here: the one of the kitchen personnel and the one of the visitors, one behind the counter and one in the public part of the restaurant where the results of all the efforts in the kitchen are enjoyed.

Expectedly, Kitchen ends where it begins – back in the eating area of the academy – and this time the audience is served a glass of wine and a delicious desert. Yet, it might not taste the same now that the audience did not just passively wait for their food to appear on the table but instead actively observed its preparation. This review is written as part of “Zoom In / Приближаване“, an individual project of the author, supported by the National Culture Fund of Bulgaria.