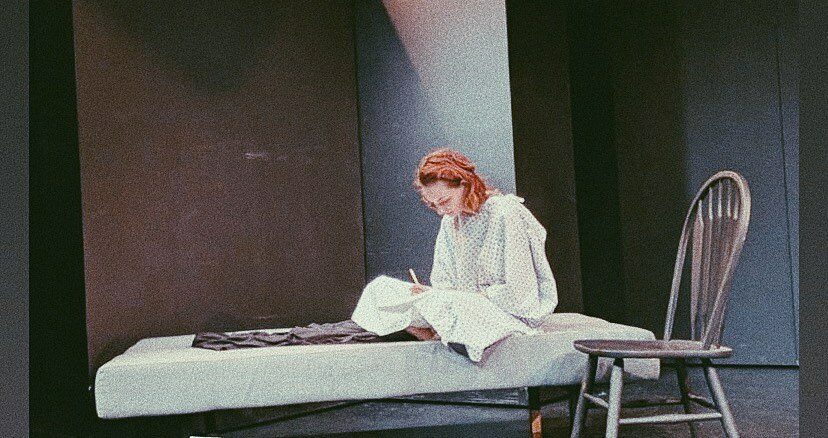 Due to what looked like overlapping run times at the end of another long festival day, I thought I was going to miss Anna St. Hesia Dreams.  I rushed out of one theatre two blocks away, ran into a friend on the street and stopped to chat until I realized he was holding a program for the show and that there was actually time to make it in spite of the exhaustion and a pressing need to get home and write.  It turned out to be the perfect show – not only to end the day but in many dreamlike, horrifying, visceral ways.  Written and Directed by Drew Petriello and featuring Jinny Ryann [keep an eagle eye on both of these artists, friends], the play is a one-woman show featuring ten characters, nine of which appear to have been played by Ryann (one of those nine is a recorded voice of Susan, the checked out stage manager and the tenth is her boyfriend Pat I. Ence, also only heard via voiceover).

Ryann’s main role in the play is Anna St. Hesia [anesthesia], a woman who struggled with the decision to undergo brain surgery to remove a tumor who is now essentially ‘under’ and potentially lost in a world of dreams, nightmares, lost love, fear, and fantastic storytelling.  The heard but not seen Susan torments Anna with recordings of Pat’s voice asking her to come back to him then begs Anna to tell Ether’s story and get it over with.  She’s failed to get through the story seventeen times and Susan so desperately wants to sleep – something she cannot do until the task is complete.  Anna acknowledges the audience as part of her world – we are no longer real, we are in this to the end.  If she finishes Ether’s story, she can wake up.  Before ten minutes have passed Anna has made it clear she’s tempted to steer clear of reality forever.  “What’s so great about reality anyway?  It’s just loneliness and one opportunity… drowned like a sack of kittens one after the other.”

Reality may not be appealing but Anna feels she owes Ether and so she begins.  She tells us about the Dreamspace where Dreamweavers mold their features [she calls them “tourist destinations”) around the sleeping dragon Ekaw – the ‘great dreamer’.  Young weavers like Ether and Neur create things out of their imaginations using the Dreamspace as material.  Ether’s wise father Bellum advises his son and gives him a mare shell necklace to assist him, suggesting that he must listen to the mare shell if he is ever uncertain about his work.  The mare shell is the fossilized remains of ‘a nightmare beast called the Bugle” and Ether is warned to never let the necklace come in contact with a feature.  Failing to impress his mentor Callosum and pressured by his overly enthusiastic peer Neur to create something unique, Ether instead creates a fleshy blob with a stump that turns into a neck that only gurgles.  Hoping for guidance he consults the mare shell and the necklace tells Ether to place it on the blob.  He does.  And bad things happen. 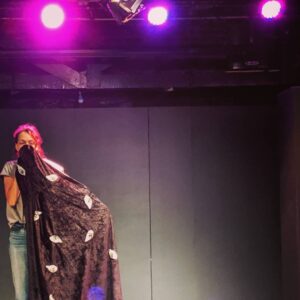 I don’t want to go into too much detail because I hope this play will come back in some fashion and offer audiences a chance to experience the journey for themselves.  If they do, one can only hope they will not invest in anything more high tech than they already had at The Complex in Hollywood for Fringe.  With one actress, a couple of painted black boxes, a hospital bed, a chair, a tangled web of what looked like cords from discarded Apple products serving as the mare shell necklace and strong physical and verbal choices, Rinny and Petriello crafted a world that could make any filmmaker with a multi-million dollar budget green with envy.  Things go horribly awry the moment the mare shell comes in contact with the feature, as we might have foretold ourselves – the Dragon wakes up and The Bugle is brought back to life.  It is described as “A dark purple – almost black – spire…. It’s alive.  Thick, hose-like veins pulse.  Suction tubes grow out of it and are embedded in the gray ground…. This… is a nightmare. A nightmare beast.”

We don’t need to see it, no great feats of puppeteering are necessary.  Anna brings it to life with a black cloak with many eyes pinned or drawn on it.  The top of the cloak [that could be a bathrobe for all we care] masks a megaphone that distorts her voice and makes this creature feel dark and dangerous even though the lights have not changed nor has a single piece of scenery moved. Cortex, an elderly Dreamweaver, tries to charge what amounts to money to get people out as the Dreamspace starts to collapse.  Ether gets separated from his wife, Phene, and longs to return to her.  Worlds collide, lives are in jeopardy and all along Anna is on a table somewhere with Pat waiting nearby, hoping that she wakes up.  This is a complex dream story about fear and sacrifice and yet it is presented with such clarity and a sense of purpose, it is easy to slip into it like a warm bath and not want it to end.  It’s what theatre is about.

Here is a link to the show’s page on the Hollywood Fringe Festival website: 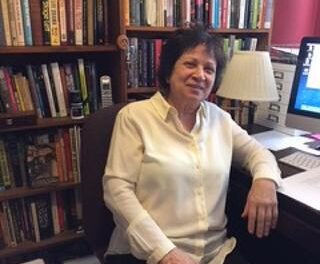