What is expected from theatrical adaptations of literature? Why have they become so popular lately? Do they succeed in meeting audiences’ expectations? These are some of the questions raised when one notices the increasing number of literary adaptations in theatre in the new Millennium.

One wonders what actually intrigues the audience to attend performances of well-known literature oeuvres and how challenging this may be for directors.  Having read the literary piece, spectators are not only familiar with the plot but they have already formed a personal and often precise picture of its characters, scenery, and meanings. One is tempted to conclude that any attempt to fulfill the audience’s pre-conceived images, given especially theatre’s time and space limitations, is due to fail. Literature always tends to prove itself superior to its adaptations. And one wonders what the purpose of such performances is except for the director’s own desire to bring alive a particular piece or possibly his/her vanity in wishing to add to one more version of a classical piece.

An adaptation is usually measured by the degree of its respect to the “original” and the author. But what is actually implied by this “respect”? It is well known that an adaptation cannot include every aspect or detail of a novel or piece of prose, so the challenge for both the director and the audience lies in their response to the literary original; the question, then, becomes not so much whether the adaptation is loyal to the original as whether it is coherent, it shares in the spirit of the book or opens to new paths of understanding or creativity… 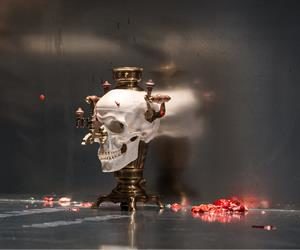 This is the case of Fyodor Dostoevsky’s novel, Demons adapted for a Greek cast by the Russian director, Konstantin Bogomolov, at the Onassis Cultural Centre in Athens just before 2017 expired. It was the first time that the Greek Foundation invited a foreign director to collaborate with Greek actors. (The Greek audience was familiar with Bogomolov’s work since his five-hour adaptation of The Brothers Karamazov at OCC the previous year, which was enthusiastically received by both critics and the public.)

Bogomolov’s adaptation succeeded in creating an autonomous play of 1h 55’ out of the 1.000 paged original book. The selected parts formed an independent, coherent story that did not presuppose knowledge of the book in order to be understood. Inspired by the true story of a political murder that troubled Russia in 1869, Demons depict a radical group that desires to overthrow the government and undermines the Russian church. The entire novel takes place in a small town outside of St.Petersberg where Stepan Trofimovich Verkhovenskii, a western-oriented idealist teacher of 1840s, lives under the patronage of Varvara Stavrogina. Around him a group of liberal-minded men is gathered whose lives, thoughts and families intertwine. The master conspirator, son of Stepan Verkhovensky, Pyotr, and his counterpart, Nikolai Stavrogin, son of Varvara, dominate the extremists–the philosophizing Shigalyov, the suicidal Kirillov, the former military man Virginsky, and Ivan Shatov–urging them to commit crimes (to murder Shatov among others) with little remorse. Finally, apart from Pyotr who escapes and Nikolai who commits suicide, the rest of his crew is arrested. While Stepan Trofimovich, dying in the arms of Varvara Stavrogina, acknowledges his misbelieves and returns into Christian faith.

Parts of the book represented focused on the conspiracy story, the action of its members, mostly Verkhovensky, Kirillov, Shatov, and on Stavrogin’s enigmatic and dubious personality. It also included the censored chapter referring to Stavrogin’s confession of a young girl’s sexual abuse. Although Bogomolov’s theatre adaptation drew on the plot of Dostoevsky’s chef-d’oeuvre, it was relocated in place and time. The scenery was: a children’s asylum, a hospital, a convent, a church; the time referred to today, a few years ago, or in the close future? Any attempt to specify these would be in vain. Place and time were ambiguous and in constant change. Contemporary and timeless. The performance was full of symbols and signifiers, creating an atmosphere different from the historical specificity of the original work, firmly placed in nineteenth-century Russia. 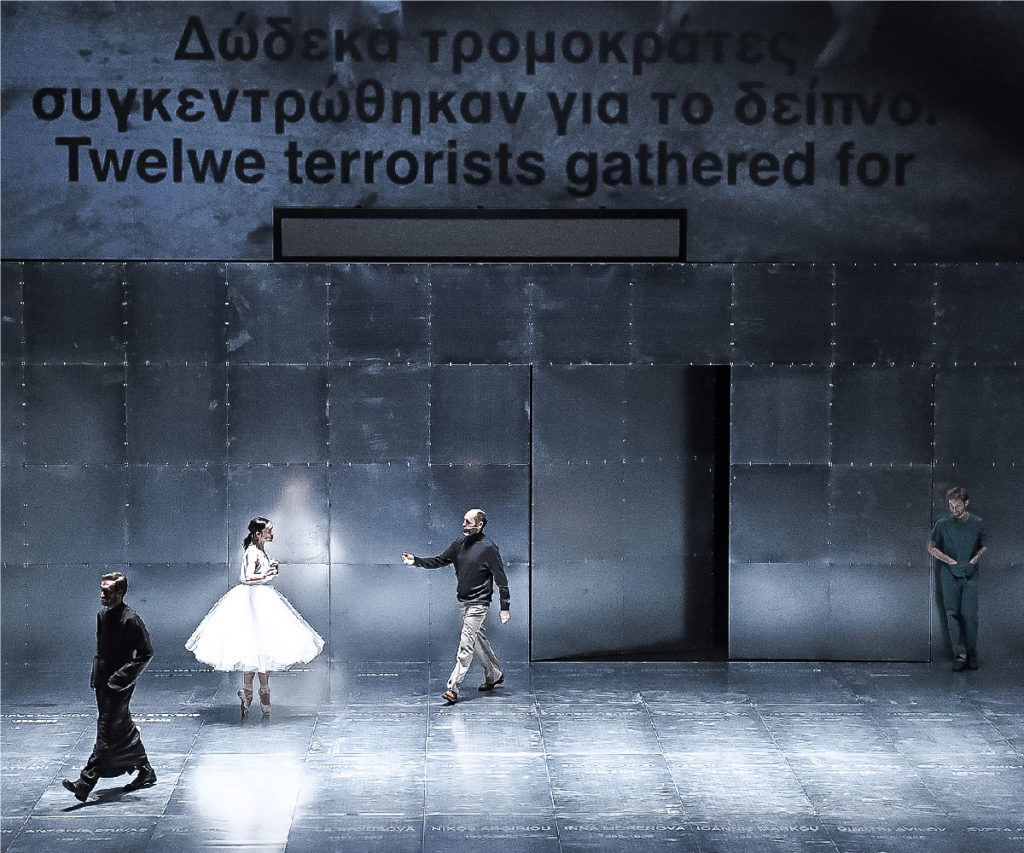 Scenography was mainly responsible for this ambiguity. A three-part wall with metal covering and two door openings and a window, constituted a plain, austere environment, open to multiple readings. The floor was composited of children’s tombstones with names and dates written on them, all recent. Two cameras on stage focused on different angles and projected on the wall upstage details of the actors’ bodies or faces performing on stage. Images, photographs, short videos, lines, and words were also projected, redefining space and proxemic relations, thus introducing new interpretations of the performed acts and words.

The metal lining of the wall contributed to the lighting of the play as it reflected lights and reinforced the play’s visual effects. Candles were used mostly for their religious connotation. The same principle determined the presence of scenic objects which were few but essential: a cross, a skull-shaped samovar, playing-cards depicting saints, guns, and a knife. Costumes bore their own connotations in correlation to the scenic objects and visual projections: medical gear, surplice, Nazi uniforms, suits. They were abstracted from Dostoevsky’s era and placed in later historical and contemporary contexts. Music and sound effects were matching; the audience was exposed to hymns of Catholic and Orthodox Church, Muslim and Hebrew psalms, classical music.

The acting was neutral, like automata, displaying no emotional or personal involvement. The actors were like mediums of acting, speech, and gestures, who conscientiously executed their role and then rushed off stage. The director loves playing with gender conventions, so Stavrogin was impersonated by a woman while Fedka, the convict, adopted feminine behavior and clothing. 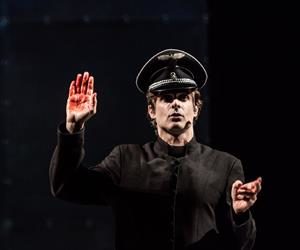 Bogomolov composed a performance full of historical, political, cultural references, and high critical charge. It was obvious that he had studied the novel in depth and wanted to depict its strong points and symbolisms: presentation of atheism, nihilism, dominant ideologies, satire (of the Russian society and authorities), and prophecy (of the impending totalitarian regimes, the Holocaust, terrorism). Therefore, in the end, death is welcomed as the only redemption from human decay. Provocative and sarcastic with respect to ideologies, religions, power, human virtues, and values, Bogomolov focuses on displaying the negative aspects of human existence: criminality, hypocrisy, deceit, insanity. But provocation is his aim–“art’s aim,” as he confides–and he succeeds in it by integrating extreme objects or acts. For example, Stavrogin is shown to confess while he is in the toilet and afterward the priest eats his shit; merging images of Christ and Satan. The play’s commentary on faith, religion, and their influence effects an intended insult. The director questions and challenges the audience’s cultural and ideological limits, and emotional tolerance. He also uses Dostoyevsky’s doctrines, doubt, and disbelief, against the writer himself: it is well known that Dostoyevsky suffered from epileptic seizures; he also believed in the power of Orthodox Christianity and of Russian cultural and political tradition to ensure prosperity to Russian people (he entered the pochvennichestvo, a movement similar to Slavophilism); he rejected atheism and western philosophical movements. In the play, acts like exorcism that is practiced in order to cure epilepsy, the clergy that is called to save the sinners or imposes its (criminal) will, Pyotr who turns either into a priest or into a (Nazi) tyrant, can be construed as sarcasm to Dostoyevsky’s ideas and beliefs in Christianity, Russian Orthodox tradition and totalitarian regimes, under the influence of western cultural ideals.

After attending this heretical performance, the answer to the question of the use of theatrical adaptations comes easy. They may offer a different interpretation of the literary work, a new perspective, a revelation of hidden or unthought-of aspects, meanings or implications, a life that is finally embodied and personalized and art forms that intrigue the mind and the eye. The question to what extend provocation is indeed meaningful and not merely self-referential is open to consideration. Since an adaptation absolutely loyal to the original is a myth, it is more intriguing to scour literature as a source for new creations; which is what Bogomolov successfully did.

Finally, one cannot avoid interrelating the invitation of the Russian director in 2017 as well as the selected adaptation with the centenary of the Russian Revolution, especially after considering that Demons proved to be a prophetic novel of the consequences of materialistic ideology…