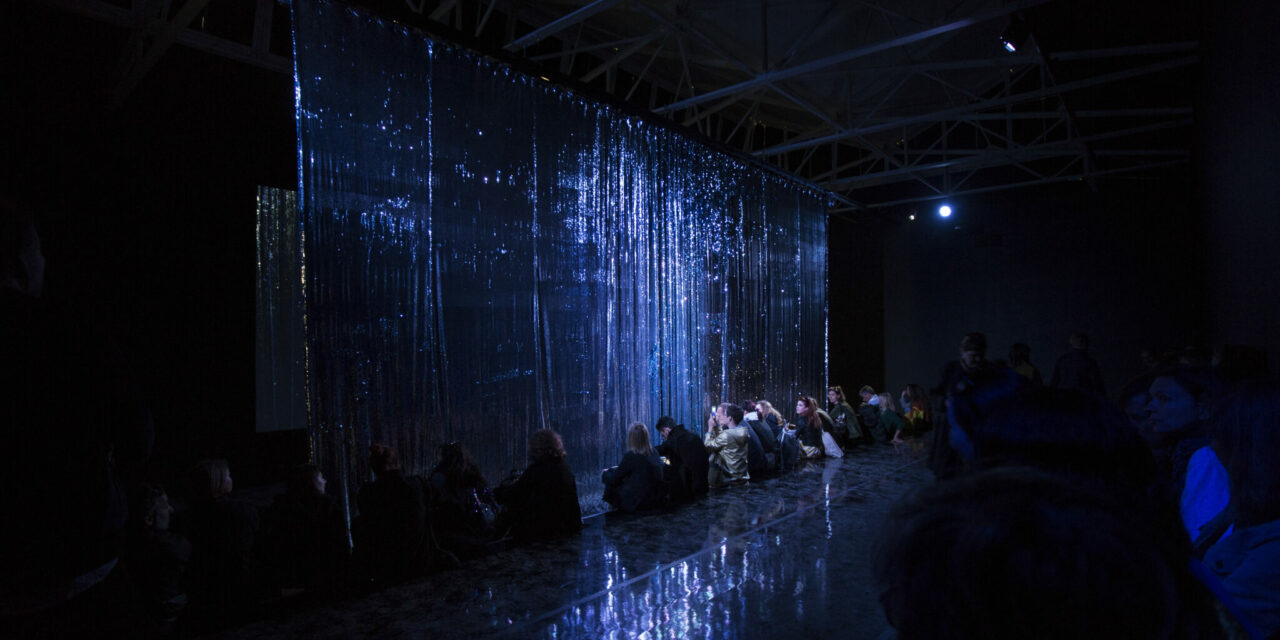 Artists from three different and fairly distant parts of the world — Australia, Brazil and Switzerland — employ movement, dance and gestures on the screen to represent their countries at the 58th International Art Exhibition-La Biennale di Venezia (Biennale Arte 2019) in Italy.

A three-channel video projected into three large screens that are placed on the periphery of a red-carpeted amphitheatrical space is the work called Assembly (2019) by Angelica Mesiti and it is exposed inside the Australian pavilion in Giardini. Gestural or corporeal and rhythmic occupations of space follow a series of medium translations initially instigated by words. At the next stop, in the Giardini, the main room of the Brazilian pavilion is divided symmetrically and on its two opposite sides across the long dimension, visitors may view Swinguerra (2019) by Barbara Wagner and Benjamin de Burca. Semi-naked dancers with red-shadowed eyes rehearsing a series of choreographic steps in the sound of the Brazilian popular music swingueira perform on the two opposite screens. Last, but not least, mediated bodies dressed in glittery clothes and moving freely inside a night-club atmosphere occupy one side of the darkroom of Swiss Pavilion as part of Moving Backwards (2019), the recent film work by Pauline Boudry and Renate Lorenz. These three screen works, analyzed through the lens of dance and choreography and from the perspective of a dance scholar, have something to offer regarding the use of movement on the screen and its surrounding space inside the context of visual arts and especially as part of Biennale Arte 2019.

As mentioned elsewhere, the exchange between dance and the visual arts is not new nor for the general historical context of this interchange neither for the specific context of La Biennale di Venezia. Going just a few years earlier, This Variation (2013)  by Tino Sehgal won the Golden Lion at the Biennale Arte 2013 ‘with a piece that can only be described as an extended, long-durational choreography’ (Franko and Lepecki in Dance in the Museum, 2014: 1). Keeping in mind this frame,

In an attempt to answer these questions, the theme of this year’s Biennale Arte under the title May You Live in Interesting Times may be quite helpful. The title summarises a curatorial concept proposed by Ralph Rugoff that aims to turn actuality into a source of inspiration and perhaps into a commentary of the times that we live in especially by offering a new point of view to existing facts (these facts may even be considered the categorization of disciplines mentioned above). What does the context of this exhibition, its title and the identity of  La Biennale di Venezia as a prestigious place for contemporary high art, offer in understanding Swinguerra, Assembly and Moving Backwards; three works that depict different manifestations of dance on the screen?

Ιn the case of Wagner and de Burca’s ethnographically-based work called Swinguerra, semi-nude bodies dancing on the rhythm of swingueira are being transported through the screen from the specific ‘low-class’ context of Brazilian dance competitions to the Western context of the Biennale’s ‘high art’. These mediated bodies relocated from Brazil to Italy become an opportunity to reflect on the local competition culture which turns into an arena of resistance exposed internationally. More specifically, Swinguerra is a compound word originating from swingueira and the replacement of ‘gueira’ with ‘guerra’ which in Portuguese means ‘war’. Performed in unison and in various gendered-defined group formations, these minimally dressed bodies celebrate the carnal desire — seen through the crotch slap, their provocative gaze that looks directly into the camera, their sexually rotating hips and swirling heads. At the same time, these dancers practice how to fight against those who wish to oppress the freedom of their bodies — as seen through the disciplined movement of the salute gesture and the aggressive movements of punches and kicks. Through a fusion of dance and war Swinguerra becomes a practice of resistance to the current right-wing politics of Brazil and a mirror of the socio-economic issues that face the youth grassroots culture currently residing in Recife, the capital of Pernambuco state in East Brazil. These youngsters resemble to rebel warriors who train collectively through the rhythm of a sensual dance. 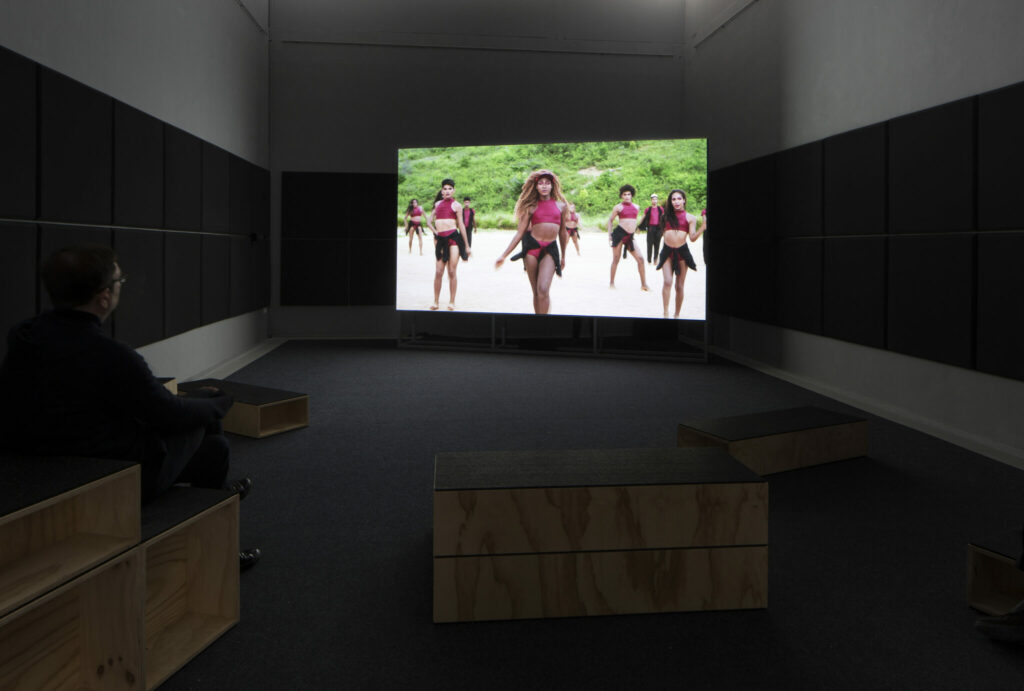 If unison in Swinguerra is a way to express collective power and strength, in Angelica Mesiti’s Assembly the strive to be in unison becomes the core of her conceptual and artistic endeavor. Assembly in the Australian Pavilion explores through the basic means of non-verbal communication, such as sound, gesture and movement, the ways that people gather together and then separate in order to rejoin again. Assembly is based on a process of continuous medium translations passed through different ways of attempting — not always with success — to be together; as it happens when playing music as an ensemble, dancing rhythmically as a group and singing joined in a polyphonic chorus.

The starting point of Assembly is a poem by the Australian writer David Malouf which has been transposed into a music score with the use of the stenographic Michela Machine. Then, this music was played and sung as a chorus after being performed through rhythmic collective dance movements and hand gestures based on the ‘Nuit Debout’ demonstrations in Place de la Republique in Paris (2017). Using the words of Juliana Engberg, the curator of the Australian pavilion, the formations of togetherness in Assembly are attempts to understand ‘how we perform democracy, how we welcome people into democracy and how we have to practice democracy’ [video]. The exercising of democracy is profound both in the conceptual and dramaturgical structure of the work that follows a continuous process of medium translations as part of different performative contexts of togetherness as well as the architectural structure that the work is placed in. The audience is assembled into a spatial amphitheatrical structure in order to attend the three-channel video installation and choosing to sit next to an unknown person in a circular format, to change position, to leave earlier or to come and go are ways that the spectators engage with practicing democracy; making individual choices as part of a fluidly formatted group of anonymous viewers. 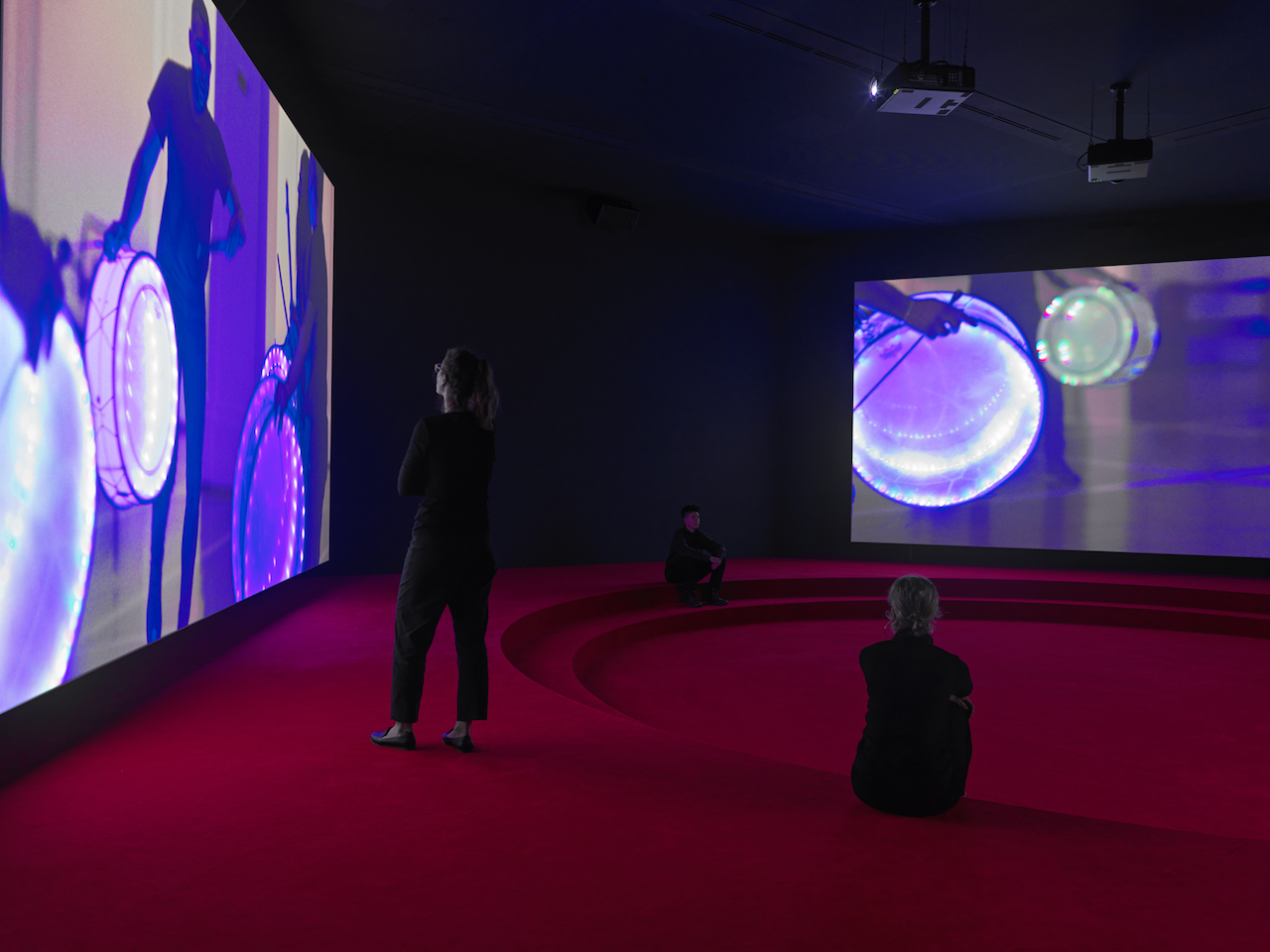 Although this kind of democratically moving spectatorship is evident in all three screen-based installations, in Boudry and Lorenz’s Moving Backwards the audience in front of a vertical screen is mostly engaged with tracing the origins of the sometimes un-natural movement. In Moving Backwards [link], the artists, committed to an approach that usually puzzles our normality, suggest a re-reading of time and space as the screen performance has been set in reversed facilitated by video editing software. There is a fusion, as well as an illusion of time. The difference between the forward and reverse cannot be diversified and perceived, at least at first glance, unless from the awkward movement of the long hair or the large clothes. A moving curtain in front of the screen that moves in parallel to its “digital double” (Dixon in Digital Performance, 2007) is the only element that connects the time of the film with the present time and it becomes a trace of the once live performance. Quoting elements from popular dance — as for instance the moonwalk that gives the impression of moving forward while actually moving backward –, and combining  queerness with conceptual choreography and Kurdish guerrillas techniques — characteristic of this is the wearing of shoes in reverse –, Boudry and Lorenz’s Moving Backwards connotes going backward as a return to conservative and regressive social phenomena such as racism and discrimination. Against the linear and evolutionary perception of historical time as progress, this eclectic choreographic approach is being supplemented by letters written by scholars, activists, and choreographers who give an insight to the concept of moving backward through their philosophical, historical, ideological and ethnographic contemplations. 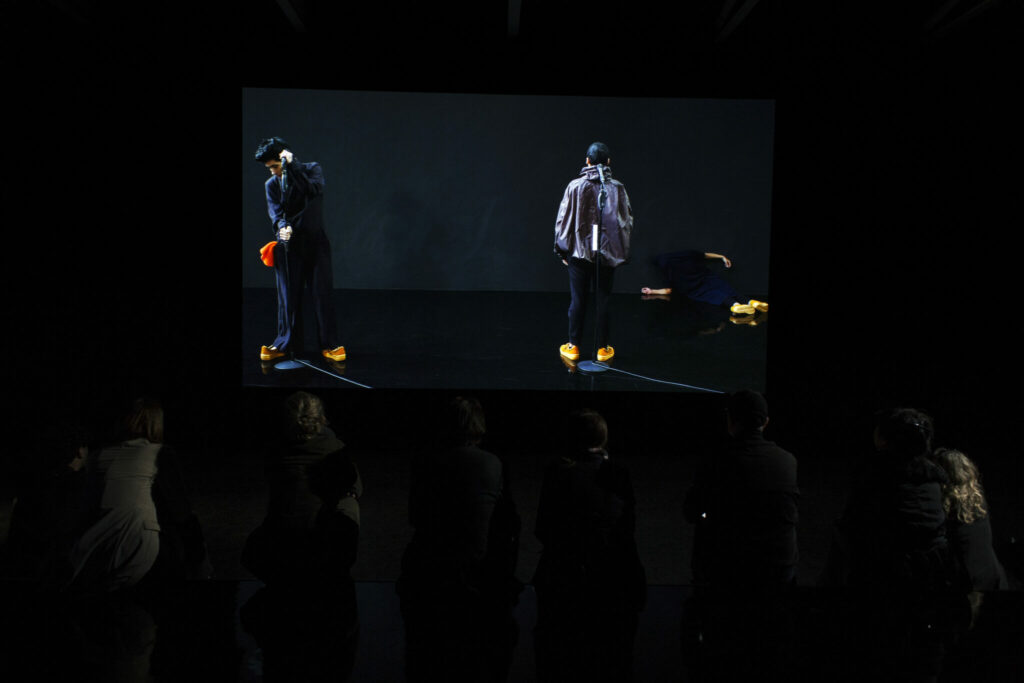 The challenge of trying to be together (referring to Assembly); reflecting on the tendency of going backwards as a sign of our times and through the regression of progressive ideas that seemed already secured but are being challenged anew today (regarding Moving Backwards); and attempting to hold out against the oppression of the free expression (such as in Swinguerra), these works challenge our understanding of collective practices, expand our perception of time and help us reconsider the potential of the body as a site for active resistance.

These installations and how we encounter the moving-images as part of them is an important aspect to consider towards meaning-making. Their spatial arrangement and how the screen is exposed through its conjunction with architecture deserves attention –, especially for screendance artists; thus artists who combine choreographic and screen-based practices. In these three works, spectators, liberated from the constrictions of theatrical conduct, have the freedom to choose the time-based and spatial — and thus choreographic — parameters of their encounter with them. The positioning of the viewers in relation to the moving-image becomes a process between transition and stillness associated, in turn, with choosing the distance from the screen, as well as the other co-viewers, and the duration of the engagement in front of the screen. In the process of this spatio-temporal exchange, the architectural embracing of the screen and the audience, when examined in contrast to the separation of the spectators from the stage or the surface of the moving-image when referring respectively to theatre and cinema as architectural typologies, facilitate the viewers to engage further with what unfolds on the screen. As seen in the amphitheatrical arrangement of Assembly that promotes democratic spectatorial behaviour as well as in the moving curtain in Moving Backwards and the dry setting of sports’ matches in Swinguerra that act as a reminiscent of the theatrical ritual and the competition culture respectively, the context of the moving image and its placement in space drive the ways in which we become part of them and engage with otherness and queerness.

The artists of this discourse look at dance and employ choreographic means for orchestrating spectatorship without identifying themselves as choreographers and without having proper dance training. And I can only think how refreshing and stimulating for the world of dance is to see visual artists using choreographic tools as part of their creative practices in order to manipulate the triangular body-space-time connection and its relationship with performers and spectators alike.

The Biennale Arte 2019 ran from 11.05 until 24.11 and Swinguerra, Assembly and Moving Backwards were found in the area of Giardini.

The next appointment for watching Moving Backwards is scheduled at Joan exhibition space in Los Angeles where it will be available from the 7th of December 2019 until the 16th of February.

Updates regarding the upcoming presentations of Swinguerra and Assembly are not yet known.