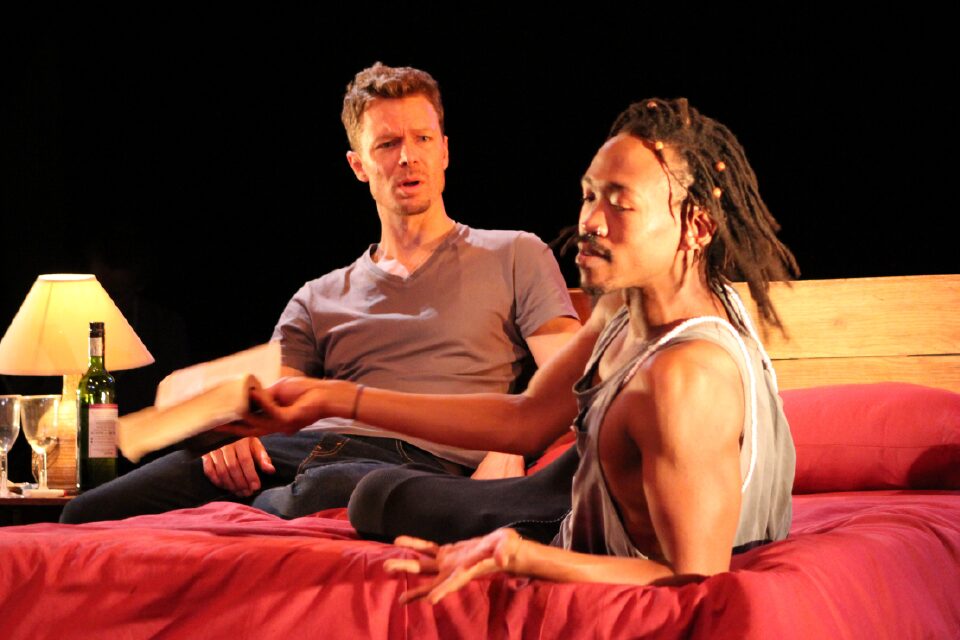 Now and then a stage production is mounted supplying more than entertainment, albeit intellectual or humorous, becoming a ‘total’ theatre experience. Seen at the recent Klein Karoo National Arts Festival (Little Karoo National Arts Festival) in 2017, playwright, designer and director Neil Coppen’s BuiteLand  (foreign country) was an addition to my small but precious collection of jewels in my heart and memory.  Let me rush to add that I can’t recall any other production touching me this much in all the corners of my psyche, mind, soul and solar plexus. It deserves my unconditional applause and I’m grateful for the opportunity to have witnessed it.

Coppen juggles with his audience members’ humanity as much as with his characters.’ The premise is relatively straightforward: two young men meeting with the eye on a possible sexual tryst. One is white and Afrikaans, the other black and Zulu. One is a scientist; an anaesthetist. The other is an artist; a choreographer. But he also has a calling (‘ukuthwasa’) to become a sangoma (isangoma is a Zulu traditional healer and diviner).

This gives rise to an intertwined and complicated ‘tree’ of clashing cultures, beliefs and religions, emotions and views that are reflective of historical and current themes in South Africa’s socio-political landscape. Both men are the products of their respective conservative upbringings and try to reimagine themselves outside of the boundaries created by religion, history and culture.

Two mothers – one Afrikaans and wife of a parson, the other Zulu and born-again Christian – have close ties with their sons. Through their veins run the blood of ancestors, traditions, habits and beliefs that uneasily, yet unavoidably, co-inhabit a shared conceptual and physical space. Both men have been scarred: the Zulu mother’s son has been physically injured, the Afrikaans mother’s son psychologically. Both are begging for their sons’ well-being within this collision/collusion of cultures and worlds.

Entwined in this is the third man secretly in love with his colleague, a domineering Afrikaans father (an unseen character yet his presence casts a giant shadow over events) plus the enticing thought of running away, going abroad, as if one can ever run away from oneself or one’s baggage. What started out as a fleeting encounter transforms into an inner journey of discovery exploring the invisible bonds that tie religion and science, remembrance and forgetting, tradition and contemporaneity.

Before Coppen reworked the play into a trilingual piece, he called it NewFoundLand depicting irony in itself. As does the Afrikaans title which should read Buiteland but is written as BuiteLand (directly translated as ‘a country outside’).

Coppen’s direction equals the brilliance of his script, creating a continuous and simultaneous interplay between concept, intellect and emotion that offer a multi-dimensional theatre experience. Every movement, gesture or prop co-creates meaning and as with the initiation into the world of the isangoma, it’s steeped in symbolism. There is no padding or window-dressing as I call it. Everything has a meaning and adds up to the sum total.  The conclusion one comes to is that no matter the diversity in our ancestry, religion (or lack thereof), race or lifestyle – we can find commonality through our human needs and longings. Although this is no ‘new’ idea, it’s the way in which Coppen tells his stories, the way in which presents this ‘message’ that sets it apart from most other efforts.

Throughout the acting is of the highest calibre. This is ensemble work at its ultimate best. Jacques Bessenger and Kopano Maroga disturb, upset and move in their focused, fervent portrayals. Elize Cawood as the mother delivers an experienced, chiselled, downtrodden yet proud woman and her subtleties hit like hammer blows. Equally dynamic is Marvin-Lee Beukes as the hospital pharmacist while Ntombi Gasa and MpumeMthombeni also rise up from the masked phantoms of an emergency operating theatre to become beings of flesh and blood.

BuiteLand contains all the elements and facets which originated in the amphitheatres of the classic Greeks such as ritual, confrontation and the exertions of fate, yet allowing the human being freedom of choice. Add to these rich soil millennia of knowledge, development and technology and the result is sublime theatre.

My only criterion for any art form is honesty. Sincerity. Although Coppen applies contemporary trends in theatre and the presentation is certainly multileveled and multifaceted, tuning into all one’s senses and emotions, not a single dishonest moment could be detected in the dialogue, interpretation and/or direction.

One is not often compelled to visit a serious drama for the second time. Musicals, good musicals, because of the infectious nature, have that effect. However, art displays more and more with every viewing. My second time watching Binne Land was an even greater experience. The work, the production and the acting are so rich in nuance, it vibrated in every synapse of my body and soul –  a life-changing production.

I trust that this production will receive opportunities to travel widely. Not only for the director and cast’s sake but especially for theatre-goers elsewhere in South Africa and abroad who will appreciate an emotive and profound interrogation of the complexities of the South African social context, the entanglement of our humanity and the search for a shared consciousness. 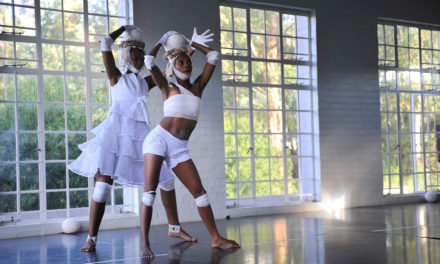 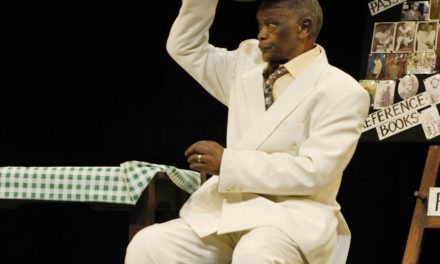