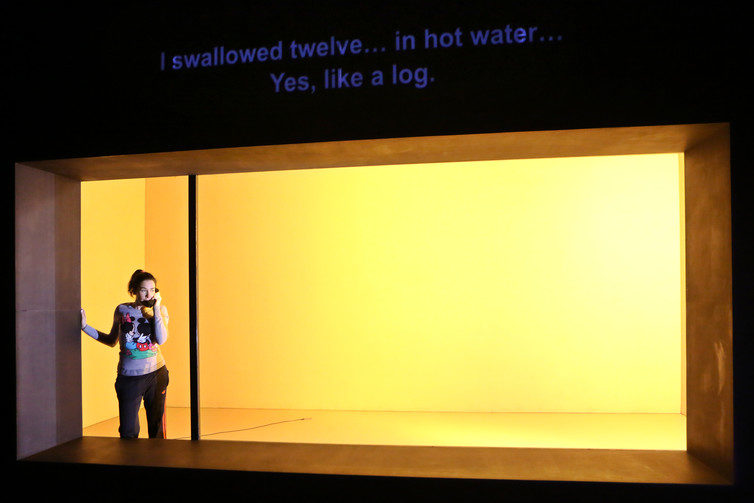 An unnamed woman alone in an apartment conducts an increasingly panicked conversation on the telephone with the man she loves, but who has abandoned her for another. Her assumed fortitude gradually crumbles over an hour as inner desperation rises to consume her.

Currently playing at Carriageworks as part of the Sydney Festival, Jean Cocteau’s 1930 monodrama, La Voix Humaine, is melodramatic enough – but the play is toughened theatrically by the fact the audience hears only one-half of the conversation.

This deprivation of dramatic oxygen means we both sympathise with the psychological asphyxiation of the lead character and assume a critical stance towards it.

Monodramas are a big ask. At their best, as with Samuel Beckett’s Krapp’s Last Tape and Not I, or Anton Chekhov’s On the Harmful Effects of Tobacco, they plunge their audience in a claustrophobic emotional space with no exit sign.

At their worst, they break the time-honoured theatrical covenant with us, and simply outstay their welcome.

The situation of Cocteau’s play is historically unique: the rapid introduction of telephones into urban life in the 1920s.

With this new inhuman instrument now the prime mediator of the “human voice” — that rich sonorous carrier of “soul” broken down into electrical signals and travelling at light-speed rather than the speed of sound — the very substance of intimacy had been usurped.

This overnight substitution led to uncanny effects: distance was annihilated, voices were uncoupled from bodies, and a felt spectrality subsumed the other. In Cocteau’s play, the woman speaks of voices in the phone cord as voices of the dead; the interlocutor’s disembodied ghost strangling her in a coiling wire around her neck.

In various ways, the world of this play is no longer ours.

The bag full of hand-written letters she is supposed to return; the telegram that catalysed their love; the telephone exchange enabling their contact; and the party line buzzing with other voices — this world is extinct. Not only are telephones ubiquitous and digital today, but the entire network of communication is transformed beyond recognition.

Which is why it is a very odd decision to set this production in the present day.

In Toneelgroep Amsterdam’s curious staging, the critical prop, the telephone receiver, is a cordless one (which makes the great line about the cord around her neck meaningless). The woman plays her mindless pop music off an iPod. Her Adidas track pants and tasteless Disney top connote a certain ageing contemporary “girl-woman.”

These structural anachronisms violate the material being performed: the throng of other voices on the line; the precious rarity of a connection; the sense of the telephone as the only, precarious method of contact across a large city. Facebook would presumably have saved this woman from her fate. What the group calls the piece’s “timelessness” is only what is most formulaic and clichéd about it; what hurts in it is its situatedness in history.

More than that, the performance style that director Ivo Van Hove has asked of his performer, Halina Reijn, is at an obtuse angle to the play itself.

What we witness is a high-octane, psychologically-driven, breathless kind of naturalism; Reijn is a veritable human fountain of tics and defensive postures and giggles and faux-tough mannerisms. All of this is drawn from the available lexicon of contemporary telephone behaviour — the kind of thing we’re all too familiar with overhearing on the bus.

As such, it is a masterful display of how much “realism” can be read into an 80-year old play. But there is nothing to suggest this in Cocteau’s script, which partakes of his signature aloof style, his oneiric, abstract world of aesthetic forms. A form is not a cliché. Cocteau’s woman is a pure abstraction of the feminine, but this performance collapses the abstraction into a user-friendly TV-style of verite.

The other off-putting directorial decision is the arbitrary one of turning the set into a device for breaking up the monotony of the telephone call. At the critical point, she leaves the phone to appeal directly across the fourth wall, or sliding plate glass window, to us and her lover now revealed as a neighbour — Rear Window style. This must count as an aesthetic failure, since the script specifically states there is an entire city stretched out between them, which is what gives the difficult telephone conversation its dramatic urgency.

The music, which consists of a few generic pop songs, and a truly awful dirge-like French theme song, heard intermittently throughout, and then given a spectacularly prominent few minutes in the foreground, is both very bad and poorly integrated into the drama — Paul Simon’s “50 Ways to Leave Your Lover”, for instance, is the play-out ditty banalising her suicide.

Within these constraints and failures, all of which belong to the director, Reijn herself remains a mesmerising presence.

Only rarely does the attention stray from what she is asking us to credit as psychologically plausible. For the most part, she compels and rewards the minute focus we are obliged to give her every giggle, snort and snivel. Even the regrettable moment when she tongue-kisses the man’s empty shoe is made tolerable by the graceful and sincere effort she brings to the gesture.

This article was first posted on www.theconversation.com. Reposted with permission. Read the original here.