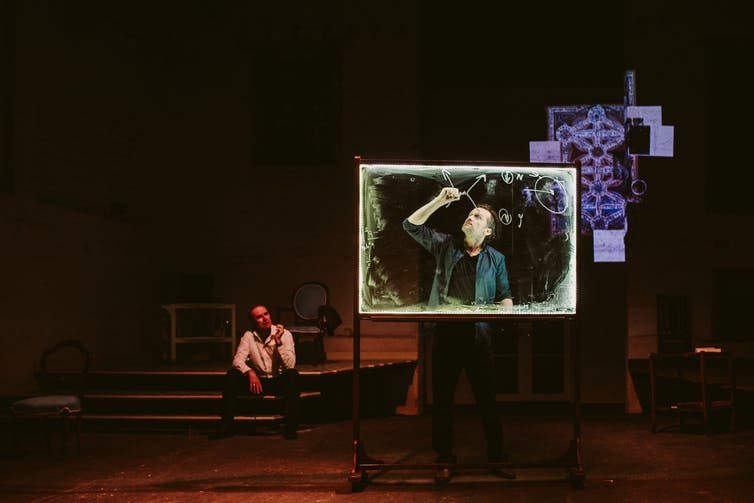 Performance group House of Sand, in collaboration with the State Theatre Company of South Australia, has mounted an ambitious production of Stephen Sewell’s work, Welcome The Bright World. The play questions truth, humanity, and what constitutes our individual and collective worlds.

Over three acts, the audience is transported to 1980s Berlin, a tumultuous period in German history characterized by division, domestic terrorism, and the Cold War.

We view this world through the experiences of Max Lewin (played with clarity and lovely nuance by Terence Crawford), a mathematician and physicist aiming to contribute meaningfully to the world through his work. Haunted yet hopeful, Max balances his personal relationships with his photographer wife Anat (Jo Stone) and anarchist daughter Rebekah (Georgia Stanley) with his working life in the field of particle physics alongside Sebastian (Roman Vaculik). He also begins work in data collection and analysis for a government keen to control (read: monitor) its civilians. 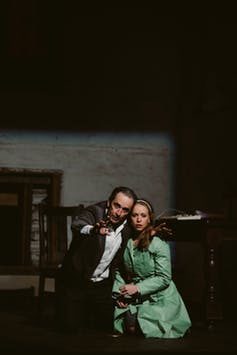 Adelaide’s Queen’s Theatre, an underutilized but intriguing space in and of itself, serves as an appropriate backdrop. It evokes the kind of derelict repurposed studio spaces set up by European artists of the time who embraced punk and anarchy in defiance of the 1980s’ avant-garde movement. This is further reinforced by the theatre’s hallway entrance acting as a gallery space exhibiting some of Anat’s photos.

The stage is effectively divided into five areas. Each side of the main stage boasts a raised platform of incomplete floorboards and stairs descending to the open center downstage area. It invites us to question what lurks beneath the surface of everyday life. Upstage double doors open to an outside courtyard area and an elevated empty doorframe on the upstage wall acts as a useful framed balcony for peripheral action and imagery.

This constructed world is populated by engaging, movable set-pieces (the illuminated, transparent “blackboards” were a highlight) and beautifully costumed actors, courtesy of Karla Urizar’s work as production and costume designer as well as the State Theatre Company’s workshop and wardrobe.

Owen McCarthy’s lighting design offers clear points of focus and seamless transitions. However, the use of projected images is only intermittently successful.

The Brechtian technique of intertitles announcing changes in acts, time and space is beneficial, as is the inclusion of Anat’s photographic work. On the other hand, the lingering image of Oedipus (communicating a family unit engaged in self-destruction) and the recurring rain clouds (a feeling of gloomy uncertainty) seem excessive, driving home points already made several times in the script. Mario Spate’s oppressive soundscape seemed more of a hindrance than a help in the creation of any tension or atmosphere. 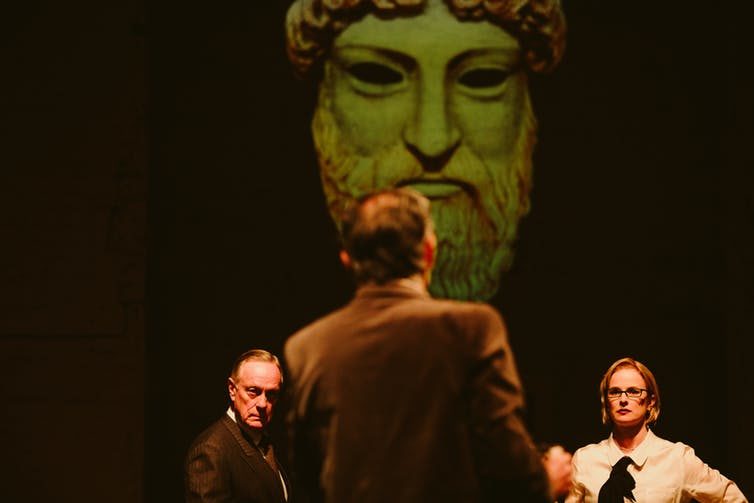 The production is thematically concerned with truth. Max and Sebastian’s work leads them to the potential discovery of “Truth,” the final quark (an elementary particle and a fundamental constituent of matter) that had eluded scientists for decades. Anat is a photographer fascinated by the corporeal expression of emotional truths. Both Max and Anat are interested in the physical world, each trying to explain, capture and frame it, but in different ways.

Max’s collaboration with the government to develop a system of data collection for surveillance also holds contemporary relevance for life in a digital age where “truth” and identity consist of data; information that is accessible, marketable and susceptible to manipulation.

The playwright’s notes describe Welcome The Bright World as an investigation into “how human beings themselves are molded and twisted as we try to survive the inhuman forces tearing us apart.” The lies we tell ourselves as individuals (and as a nation) in order to survive and relate to one another are reinforced by the web of lies between the married characters, and also by references to Germany’s wartime experiences.

Max’s dual German and Jewish identities are brought into direct conflict, especially when he engages with both his Holocaust-survivor father, Mr. Lewin senior, and a former Nazi now government associate, Dr. Mencken (both played by Patrick Frost).

His daughter Rebekah, representative of a new German and Jewish generation, undergoes a political awakening throughout the play. She rebels against authority and its manipulation of the “truth,” all while questioning, with nihilist undertones, the meaning of it all.

Sewell’s script does well to entangle the personal with the political and the physical with the philosophical–challenging audiences to accept that one cannot exist without the other. Director Charles Sanders along with House of Sand are to be commended for not only bringing this work to life in a vibrant space through the work of a committed cast and creative team but also for inviting Adelaide audiences to engage with a thought-provoking piece questioning fundamental truths about ourselves and our world.

Welcome The Bright Worldis being staged by the State Theatre Company of South Australia until October 6, 2018.

This article is first appeared in The Conversation on September 24, 2018, and has been reposted with permission.