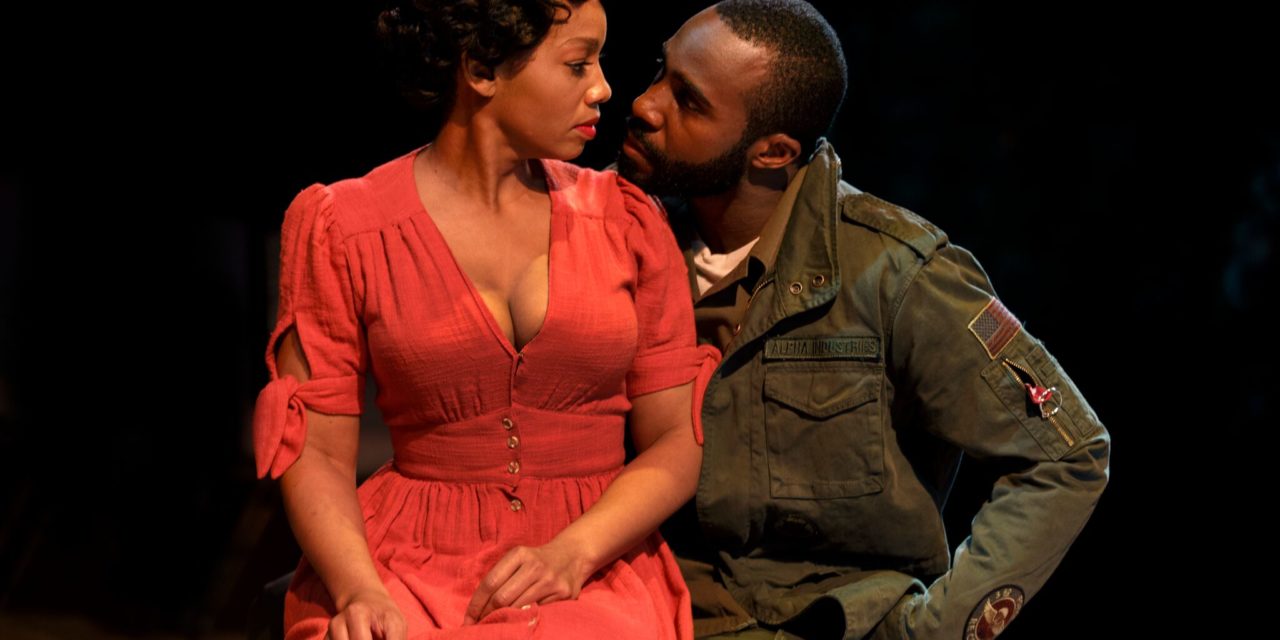 It’s almost as though the production arises from a place of lore and fable. Carmen Jones, an all-Black musical adaptation of the Bizet opera masterwork by the same name, had always been a thing that existed but…was never witnessed. Though it’s not difficult to find a production of Carmen at an opera house at any given time, grand opera treatments generally relegate it to high art, a staple for the bourgeoise and few else. Beyond such “aspirational” experiences, the world has been otherwise devoid of a major production of Carmen Jones. For those of us with parents and grandparents old enough to remember, the 1954 film adaptation of Carmen Jones, starring the incomparable Dorothy Dandridge, served as a more than adequate substitute. Everyone else found themselves relegated to the occasional scene in Introducing Dorothy Dandridge of Halle Berry floating her way through “that one song” or the genre-bending slow-motion train wreck that was Carmen: A Hip-Hopera. Neither of these quite matches the sheer magic and wonder of Dorothy Dandridge or the stage. It is then, a refreshing surprise–as New York theatre recovers from the inundation of Broadway super-musicals that were too big to succeed–that Carmen Jones has returned in a razor-sharp 95-minute John Doyle production at the Classic Stage Company. 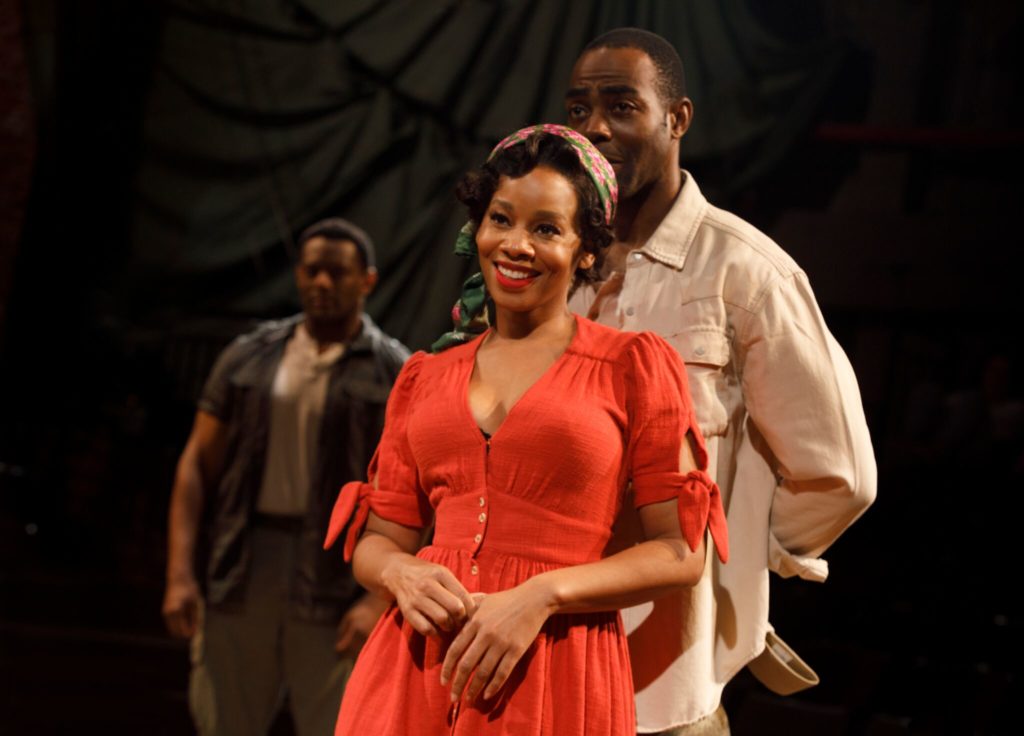 It no surprise that Carmen Jones feels right for 2018. Our national obsession with bad reality television sets the stage perfectly for the tale of a woman caught in a deadly love triangle. What is truly remarkable is who Carmen Jones becomes in the era of #MeToo, Black Lives Matter, respectability politics, sex positivity, and extra-fragile masculinity. Through the 1940s lens, Carmen is described as a temptress whose irresistible nature and plain sexuality absolve the men she meets of any responsibility for their own actions. The story, being told in 2018 is decidedly different. It’s not that Carmen Jones isn’t sexual, but a contemporary observation of the story mandates that the men she meets are also responsible for their actions and feelings through the story–which turns the narrative on its head and highlights that beyond being clever, intelligent and willful, Carmen Jones knows exactly who she is and was clear about who she is with the men she was with. Carmen Jones is no longer the story of a woman who brought about her own destruction in a love triangle. It is instead the story of a woman who remained unafraid to go after what she wanted and of how the men who relinquished their self-control to entitlement and obsession destroyed her–and the truest delight in the unearthing of this fresh lens for this tale is that the production is fully aware that that is the story being told.

John Doyle’s direction shines in this production. Keeping tradition with classic revivals like Sweeny Todd and The Color Purple, Doyle has reduced a work that sometimes suffers from its larger parts to an immersive, in-the-round retelling of Carmen Jones that unearths the depths of the story. This smaller scale creates opportunities for intimacy and delicacy that turn Bizet’s succulent and technically difficult score into a playground for seasoned actors. 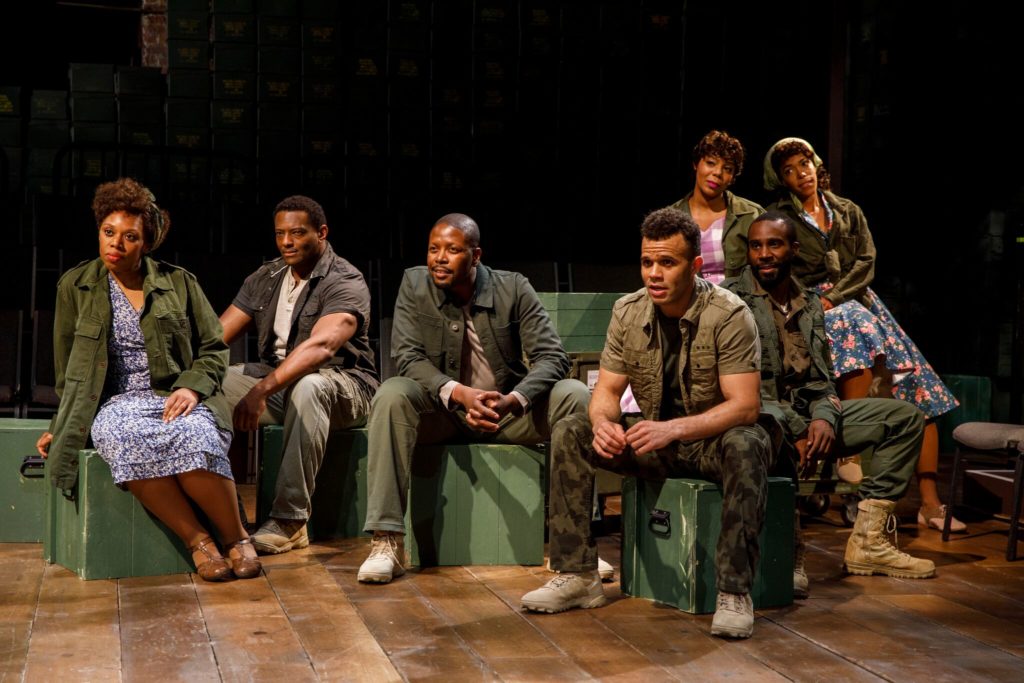 It’s not enough to say that these actors are capable. In recent years it’s been whispered that “Black actors just don’t (can’t) sing classical musicals.” If one ever needed evidence to the contrary, the cast of Carmen Jones is sensational and formidable proof. It’s not just the accomplishment of an operatic score that makes this production soar, nor is it the fact that negotiating this operatic score as a mic’d performer in an intimate setting mandates that each vocalist rescale how they negotiate the score from moment to moment. The most remarkable aspect of this production is Anika Noni Rose in her performance of Carmen Jones. A seasoned Broadway vet right, she is a breathtaking vision as Carmen Jones. Her “take no shit” performance is as playful and flirtatious as it is crystal clear, with her titanic voice filling every corner of the theatre and floating as delicately as a feather in the wind. If one ever needed a reason to bring Carmen Jones back to New York theatre, Anika Noni Rose is it–and she’s not without help. Clifton Duncan makes a completely believable Joe, bringing a depth and clear crisis of internal conflict to the role. Soara-Joye Ross as Frankie is the kind of supporting actor who is simply a dream, holding her own and maintaining the magic of suspense and performance even when the two lead characters aren’t on the stage.

This production has so many things going right for it that it’s difficult to imagine a world where it doesn’t make a Broadway bid. It has all the ingredients of a show that sweeps the award season and reminds us why works of artistic integrity matter so much in the world of commercial super-musicals.

Carmen Jones is at the Classic Stage Company in an extended run through August 19. For more information, visit the CSC website.