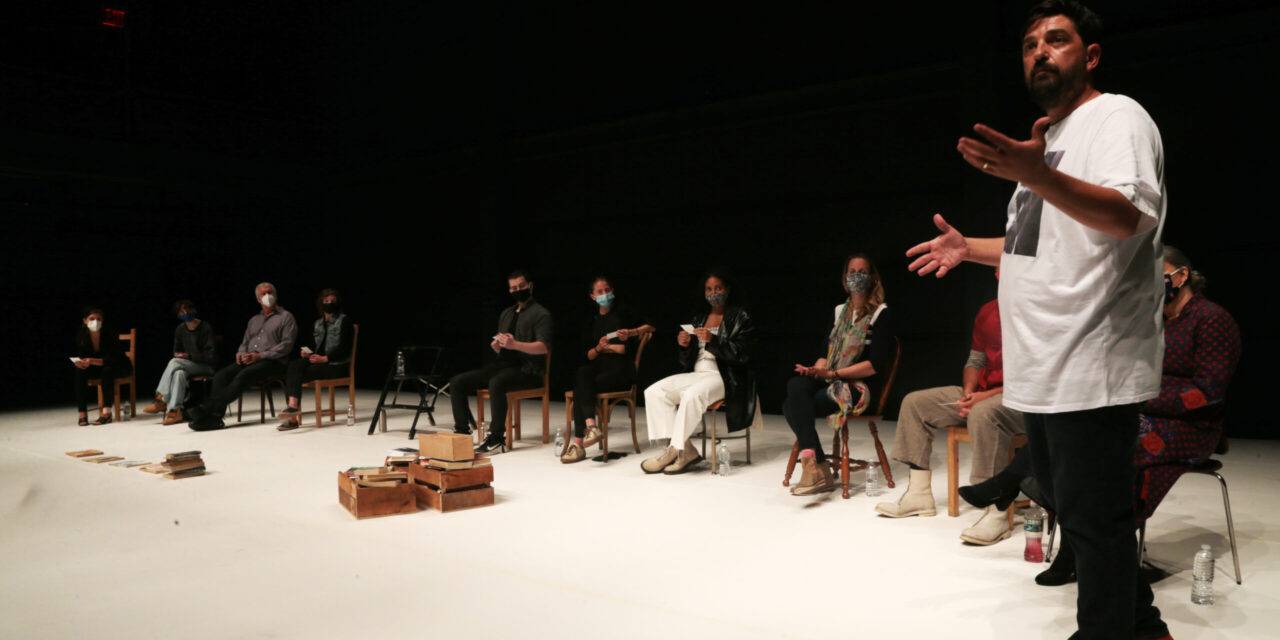 “I have an aversion to ‘immersive theater,’” Tiago Rodrigues says at the beginning of By Heart. He says this as he asks ten audience members to join him on stage for the performance. Rodrigues’s claim is a bit of a ruse. After ten people take their seats on the stage, he admits that they will actually have to participate in the piece. Rodrigues’s trickery, and his particular way of structuring audience participation, set the tone for a playful piece, sometimes dizzyingly disorientating (and often intentionally so.) Yet, as its disparate elements interweave and finally come together, By Heart emerges as an idiosyncratic and powerful meditation on personal and political ties to literature and memory.

The premise of Rodrigues’s piece is ambitious but simple: by the end of the show, the on-stage participants will memorize a poem—as the title suggests, by heart. With this conceit, Rodrigues (the new director of the Avignon festival), argues that memorizing of literature is a form of resistance to totalitarian censorship. It is inspired partly by a quote from literary critic George Steiner: “Once 10 people know a poem by heart, there’s nothing the KGB, the CIA, or the Gestapo can do about it. It will survive.” Rodrigues’s premise also references the story of Nadezhda Mandelstam, wife of the poet Osip Mandelstam. After Osip’s works were confiscated by the Soviet Regime, Nadezhda kept them alive by inviting people into her apartment, 10 at a time, to memorize his poems. Nadezhda’s campaign of memorization was an act of both resistance and love. This makes it an apt launchpad for By Heart, which examines the chains literature forges between our intimate selves and our positions as citizens.

The poem Rodrigues asks his participants to memorize—Shakespeare’s sonnet #30 (“When to the sessions of sweet silent thought…”)—also has political and personal resonances. Boris Pasternak’s translation of the poem became a rallying cry for resistance to Soviet censorship. It also has profound personal significance for Rodrigues. When his grandmother, a lifelong bibliophile from a small Portuguese village, learned that she was losing her vision, she asked him to pick a book to memorize before she went completely blind. He chose Shakespeare’s sonnets, and Sonnet #30 struck a chord with her.

Rodrigues contemplates these varied literary resonances by alternating between three different strands of the performance. In the first, Rodrigues teaches the poem’s opening quatrain to the audience, and then has the on-stage volunteers memorize the remaining lines. Even for the most participation-averse spectator, this is a pleasurable experience. The active oral repetition prompts a strong engagement with Shakespeare’s words and sounds, to the extent that we do feel sensorially “immersed” in his poem. This exercise has a pedagogical dimension as well. As Rodrigues asks the on-stage participants to memorize individual lines, the twisty and antiquated elements of Shakespeare’s language prove tricky to keep in the brain. Rodrigues engages with the participants, helping them comprehend and each word and line of the sonnet. Through these exchanges, the whole audience better understands the intricacies and implications of Shakespeare’s verbiage. Rodrigues is an affable, only sometimes needling emcee. He knows the poem well (naturally, “by heart”), but shares his wisdom with jovial encouragement.

The second strand of the piece, which dominates its middle section, focuses on memorizing literature as resistance. This part of is comprised mostly of Rogrigues’s monologue, as we follow his curiosity into a series of historical anecdotes. Rodrigues asks us to follow his mind wanderings as he ties literature to history, politics, and the sustenance of the human soul in dark, autocratic times. The success of this piece rests heavily on Rodrigues’s charisma, rooted in his deep conviction about the breadth and value of his meandering path of intellectual discovery, as well as the presentation of his findings through an appealing everyman persona. This is not to say that Rodrigues has no theatrical bravura up his sleeve. One of the most arresting and riveting moments comes when Rodrigues performs the entirety of a scene, depicting a particularly spectacular and wrenching book burning, from Ray Bradbury’s novel Farenheit 451. Rodrigues’s recitation of the scene, performed with minimal staging of the scene by the on-stage participants, captures so much texture and nuance, and dramatizes literature with surprising force.

The final strand of By Heart, which comes to the fore at its conclusion, concerns Rodrigues’s grandmother, her life and her love of books, and her acceptance of the impending loss of her vision. Here, Rodrigues’s monologue gets more wistful and lyrical, as he paints a picture of his grandmother’s village, as well as the tribulations she suffered and the history she endured. Through his grandmother’s story, which was the genesis of By Heart, he moves away from the cosmopolitan breadth of literature that has guided the piece so far, and zooms in on the cultural and the linguistic particularities of his native Portugal, and the more personal musings that guided the creation of the piece. It concludes with 10 participants eating communion wafers with the text of the sonnet painted on them, obtained from a bakery in Lisbon. Rodrigues then, perhaps summoning his grandmother, recites Sonnet #30 in Portuguese. Shakespeare’s poem, which has traveled around between cultures and political contexts, finally homes in on the most intimate and personal of moments, a potent reminder of the many planes on which literature touches our lives.

It’s brave of Rodrigues to attempt to keep all these strands and modes of performance running and intersecting throughout the piece. Theater generally values its unique ability to keep its audience keenly conscious of the present moment. In many places, By Heart encourages this kind of engagement, but the piece also drives the audience toward contemplation of the future, and into the recesses of their own minds. Rodrigues’s ruminations nudge us toward our own pasts, and our own literary knowledge and associations. He makes such a compelling case for memorizing poems that the audience cannot help but want to memorize the poem as well. I had snatches of lines running through my head even as Rodrigues was pulling me toward Soviet and Nazi dictatorships, or to the chilling prescience of Bradbury’s science fiction. I found myself in a kind of doubled consciousness as I tried to piece Shakespeare’s words together while following Rodrigues’s trains of thought. It was a striking and unusual experience, that seemed well suited to his goal of presenting the dense web of connections that literature can spin. In allowing his spectators to be both “here” and “elsewhere,” Rodrigues encourages them to keep past and present, personal and political in play within their minds. These elements to brush against one another in surprising combinations.

The richness and rewards of Rodrigues’s dramatic gamble is most hampered by the riskiest element of the piece: the on-stage participants themselves. Eager audience participants (the kinds who run to those empty seats in a mad dash) tend to have a certain type of personality, and are often tempted to perform themselves, or to steal the show. Rodrigues handles these folks handily, with an arsenal of improvisation and sometimes impish but gentle mockery and admonition. The banter he uses to subdue the hard-core participators can sometimes feel like hacky stand-up comedy, and this is where the show is at its weakest. Audience participation is hard, and even if things don’t always work out, Rodrigues is just deft enough to steer the participants back to their role as memorizers, a role that garners the support of the audience, rather than their irritation.

Shakespeare’s sonnet #30 is in some ways an odd text to choose for Rodrigues’s piece. For its speaker “remembrance of things past,” is an act of regret, recrimination and mourning. Only in the final couplet, when the speaker’s thoughts turn to a “dear friend,” can this melancholy be dispelled, and the “sorrows end.” If the poem feels slightly out of touch with Rodrigues’s own wary but unflagging optimism, the structure of the piece takes the audience on a similar journey. Rodrigues, crafting and performing this piece in a time of disturbing rightward shifts in global politics, seems on some level to want us to memorize in preparation for wars to come. Immersing us in the sorrows caused by autocratic rule, as well as the inevitable losses of aging, Rodrigues makes the past feel very contemporary. But even as we memorize while attending to historical and personal memory, the audience finally returns and dwells in the present moment. It is remarkable how much the joint project of memorizing and reciting this one poem unites the audience, and there is some sense in which we have become “dear friends” who have, at least for a little while, dispelled the threatening forces that Rodrigues has forced us to contemplate. The feeling of buoyancy and community that By Heart manages to achieve made it a particularly powerful return to live theater after lockdown. It celebrates the essence of theater as something made by people in a shared space, together.