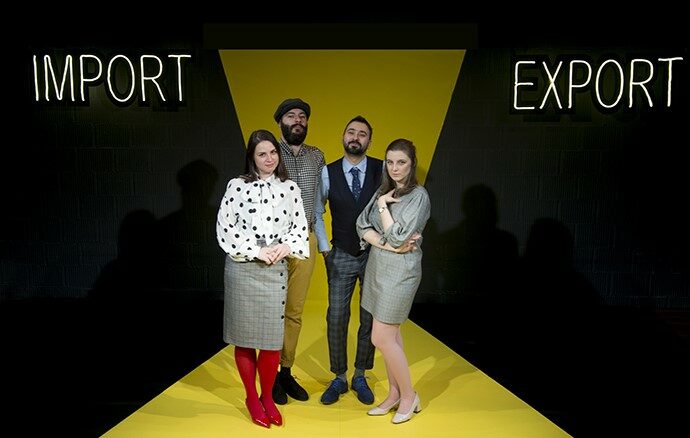 That the hallway beside the theatre is filled to its breaking point is a good sign: artists, critics, adults, and teenagers alike revel in a common ground of theatre-going, of festivity, and of imminent political discourse. We siphon ourselves into the newly-transformed Teatrul Luceafărul; once a large proscenium space, it has been modulated into a smaller, more intimate venue, with barely one hundred seats. Before us, two words are illuminated in a trendy, neon glow: import and export.

Four shadowy figures make their way to pre-set stools across the back of the playing space.

Bun de Export (translation: Ready to Export) by Alex Tocilescu is a powerful piece of political theatre, presented by Compania Point București in a one-night-only spot in Iași’s International Theatre Festival for Young Audiences. Ready to Export uses its cast of four actors to explore the complicated answers to questions forefront to the collective Romanian identity: why do Romanians keep leaving the country, and what will make them stay? How can we embrace tradition while healing from societal trauma? Should we as individuals stagnate our own personal growth for the greater good of our home? Bun de Export, an amalgamation of autobiography and fictionalized real-life experiences, attempts to answer these questions and more in its beautiful, nuanced representation of the Romananias of years past and their lingering presence within the Romania of today.

Bun de Export explores a troubling generational gap using an apartment building’s Resident’s Association as an entry point. Performed entirely in Romanian with English subtitles, Bun de Export introduces us to Alex Tocilescu, President of the Resident’s Association, who is, by his own admission, a talented writer with ego to spare. He’s charismatic and wins over his constituents by doing them small favors and vowing to advocate for them in the improvement of their homes. He, too, he reveals, cares deeply for the well-being of this building, having grown up here in the footsteps of three generations of Tocilescu lore.

Over the next hour and a half, the talented four performers (Silvana Negrutiu, Alex Zob, Crina Ene, and Constantin Dogioiu) become Tocilescu’s father, grandfather, wife, mother, girlfriend, childhood best friend, and countless other figures, collectively portraying Tocilescu’s genealogical history. Told mostly chronologically, each generation’s segment ends with the same bittersweet realization: achievement is contingent upon leaving Romania. Healthcare is better in Germany, we discover, and there are more job opportunities available in America. While moving further west comes with ideological feelings of abandonment and guilt, it comes also with prosperity and wellness. Each male member of the Tocilescu family struggles with feelings of homesickness and of inadequacy, while the females attempt to embrace the lives they’ve created themselves beyond the confines of Eastern Europe.

The play is cyclical, ending in the present tense, with Tocilescu having become a bitter, vilified apartment superintendent. Tocilescu’s manner changes only when he is offered a higher, more political role in his community. Upon acceptance of his candidacy, he runs a successful campaign built upon the preservation of an idealized Romania. Upon victory, he receives the heartbreaking news that this version of Romania in his head, with its history and its culture and its buildings, is unsalvageable; this Romania rests upon a foundation of sponge. As the ambitious leader, he now must be, Tocilescu must watch from his place of power as the home he cherishes becomes a modern, quickly-emptying shell of itself. It’s a painful spiral to watch, especially as an outsider.

Bun de Export is expertly directed by Catinca Draganescu, who adds lovely moments of humor throughout this emotional piece of theatre. Musical moments add a youthful, vibrant edge to Tocilescu’s story, and purposeful delineation of actors to each side of the stage (marked import/export) make a compelling comment on who we as an audience are meant to sympathize for at any given time. Omid Ghannadi’s simple yet effective scenography adds to the story without drawing attention away from it, only gently nudging us as an audience into each scene’s natural emotional conclusion.

Despite being in a language I do not speak, I found myself quite touched by Compania Point Bucureşti’s performance; conflicted ideas of nationalism, displacement, and diaspora are central to every culture – not just Romania’s. Additional touches of humor and music made for an inviting, personal piece of theatre, one with excellent pacing and a cohesive, effective ensemble. Successful political theatre must carefully walk the line between ideology and sentimentalism, and Bun de Export does so nearly flawlessly, transcending its contextual circumstance. Bun de Export is a highlight of the Iaşi International Theatre Festival, to be sure.

This article was originally posted at http://capitalcriticscircle.com/ and has been reposted with permission. To read the original article, click here.