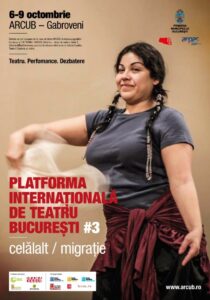 The October 2016 edition of the Bucharest International Theater Platform will bring to Romania’s capital city five performances centered on the theme “The Other/Migration.”

The Bucharest International Theatre Platform is a festival launched in 2014 and produced annually by the Romanian Association for Performing Arts in cooperation with ARCUB Cultural Center of the City, and public theaters in Bucharest. The Platform is committed to presenting new, innovative theater voices, in a conversational frame where the productions are followed by artist talks, round tables, film screenings and debates on different issues. A selection of innovative artists from different cultures is presented with the aim to start a debate on aesthetics and ethical approaches. Every year, the Platform focuses on a theme connecting Romanian society to the world. In 2014 the theme was “The Future is Feminine,” and in 2015 it was “Contemporary Family.”

The 2016 theme “The Other/Migration” responds to the warning issued by the United Nation Agency for Refugees:  at least 1,4 million immigrants are expected to arrive in Europe, via the Mediterranean Sea, by the end of 2016. At the same time, Romanian citizens are searching for better conditions of life and work in other countries, in their turn becoming economic migrants. The Platform poses the question of how can Romanian society negotiate the relationship with “the Other” whose culture is foreign, and whose traditions it tends to reject or be scared of? How do Romanians accept “the Other” among them, and what can they do to be accepted by the Other when they go abroad? The Platform’s line-up incites discussions on these pressing issues.

The Asylum Monologues, written and directed by  Michael Ruf, recounts three harrowing personal stories. Ali from Togo, who is warmly referred to as „president“ by his friends. Felleke from Ethiopia, who receives a human rights award after avoiding deportation. And Safiye, who after years of imprisonment in Turkey, and an absurd asylum rejection, makes the most life-embracing decision possible: giving birth to a son and a daughter.

The project Bühne für Menschenrechte set up a network of professional actors and musicians dedicated to drawing public attention to a range of contemporary human rights concerns. The main activity of the network is touring rehearsed readings of documentary plays, which comprise of first-hand accounts of people whose basic human rights have been violated (especially of asylum seekers and refugees) and who experience oppression as minorities. These productions are developed based on detailed research and interviews with the protagonists themselves and in consultation with organisations, which have an expertise in the issues raised in the plays.
Central aspects of the project are its long term and multiplication effect and its authenticity. As the testimonials of the protagonists will find their way in the theatre plays in a verbatim form, the performances give the interviewees an authentic voice.

Chris Thorpe and Rachel Chavkin’s Confirmation is a show about the gulfs we cannot talk across, and about the way we choose to see only the evidence that proves we are right. Working with research into the phenomenon of confirmation bias, Confirmation attempts to have an honorable dialogue, real and imagined, with political extremism.

Two Arms and a Noise by Elena Araoz Company looks at a particular set of victims of migration: the impoverished women left to fend for themselves once their men emigrate to more prosperous countries to try to make money. The heroine’s only family is her son, and, like millions of women left behind, once he leaves for America, she is left with nothing more than her hopes that her offspring will live a better life than she did.  Two Arms and a Noise is based completely on interviews and personal encounters that Araoz had through numerous visits to the Peruvian Andes. The play ends with a voiceover of an ancient Peruvian woman, recorded by Elena, in which the woman describes that even though she lost her son when he emigrated to America for a better life, the one thing he can give her is that he will pay for an American style grave for her – a status symbol in Peru.

The ARPAS production The Sensorial Map of Bucharest is a performative guided tour through places in Bucharest with special histories. Using live actors and special guests as well as video and audio installations, The Sensorial Map of Bucharest activates the visual, audio, olfactive and tactile levels of houses with a rich and interesting past.  Starting from a concept of curator Cristina Modreanu, the team worked collaboratively for each station of the tour, which is based on extensive documentation and interviews with people now living in these houses. The long-term aim is to fill in a performative map of Bucharest with the most interesting stories people have to tell about their lives in this city.

Privatopia. About Otherness presented by Handan Ozbilgin and written by Greek playwright Maria Efstathiadi sheds light on the increasing xenophobia rampant in modern societies. In the tradition of absurdism, Efstathiadi  paints a brutal portrait of a gated community.  Last year the play was performed at  LaGuardia Performance Arts Center with an international cast.  The cast included Greek, Turkish , American, Bangladeshi, Columbian, Pakistani and African-American actors.  In her video presentation, director Handan Ozbilgin will discuss the production and how she approached the subject of “otherness” from different cultural perspectives. 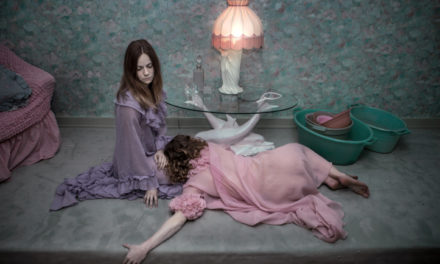