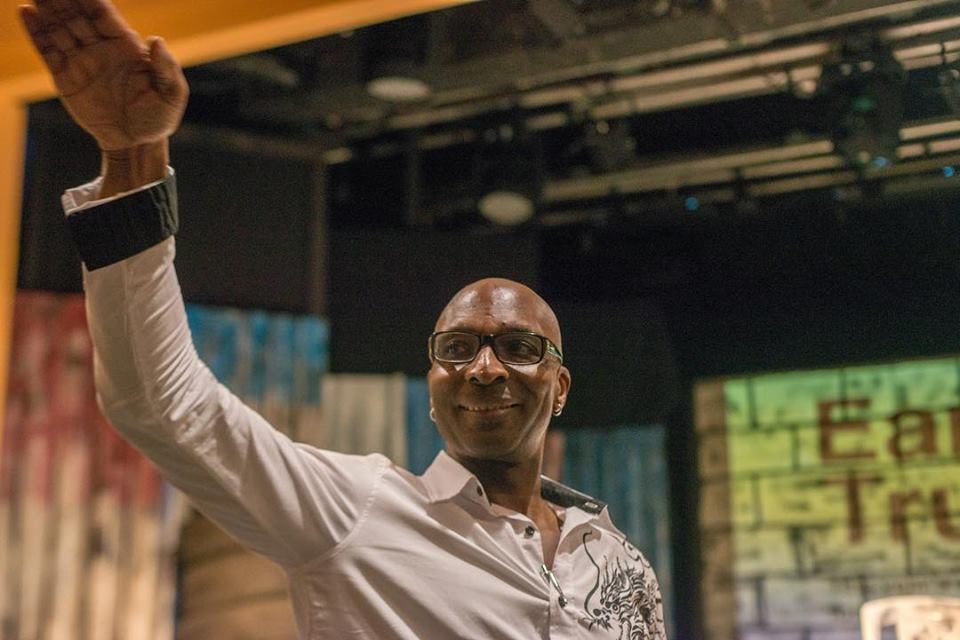 Glenville Lovell opening night of "On The Block"

“Don’t afraid to be different. Conformity is practically a death sentence to an artist. In other words: if you’re doing what everyone else has done, you don’t give yourself the chance to do what nobody but you can do.” – Z.Z. Packer: African-American author, 2003.

By a series of coincidences, several of the young artists in both the theatre and the visual art arena are investigating the life of black youth caught in the culture of the block. Like their subjects, they have defied the restrictions that conformity imposes and have struck out to explore what it feels to be the marginalized, and the misunderstood. Both end products present a curious tale, bitter in parts, sad in others but to a large degree, true to the vision that they have of the block as a social space created by and for black males existing on the margins of Barbadian society.
Glenville Lovell, who has several important productions of his plays in Barbados, and was recently awarded the Earl Warner Trust Barbados Lifetime Achievement Award, begins his conversation with a muted interpretation of the block using seven characters to tell what is an artistic quest sullied by life circumstances spanning intrigue, sex, dislike for class and what it entails, violence, poverty, and the defiance of the system that has confined them to the ghetto. [Oh how I hate that word!] I say muted because the playwright never goes the whole way in his expose. We never get the sense in their portrayal that these characters are truly products of this environment. The block for them is a stopping off place, never a kingdom that they own, control, and inhabit. As such their desperation about life, a sense of their cruelty, the grittiness that characterizes such existence is missing.
In contrast, Ronald Williams a studio artist and graduate of the BFA program at Barbados Community College [BCC], who has several important exhibitions to his credit, is strident in his imagining of life on the block making bold statements about the chosen personas who inhabit the block. Williams creates seven commentaries on block life using digital images in collage, but for this review, I will address only four. In both cases, the artists assume the stance of the outsider–Lovell as the elder observer intent on salvaging some sense of community, while Williams exposes the underlying angst of young men caught in the society’s materialistic outlook.

The block for Lovell is the place of negotiation especially in modern times when opportunities for social advancement seem scarce. It is also a reminder of the brutality of the slave past where those on the auction block have no agency, no say in the outcome except to comply or rebel at the peril of death. Goose, the character who precipitates the events in the play, has crossed the social barrier by consorting with the wife of a local judge and he pays the price for his defiance. Williams’ series Glammuh, is dangerously non-conformist in its view that the block is the place of auction. There is no block as a family unit, alternative home. Underneath the exterior glamour or “glammuh” as he calls it, there is an ugly side that suggests all have been bought and sold. Williams deconstructs several myths starting by revealing that our familiar Caribbean island, described as Paradise Isle is not a place of beauty. Skeletons of all sorts abound and the paths taken inevitably cause death and destruction. The stylized palm trees are the leaves of the marijuana plant embellished in parts with fragments of Barbados five-dollar notes–the common currency in local marijuana sales–imposed on a bloodied sun. Each revealed semi-automatic weapon represents a body, a death that results from the forbidden trade in drugs for guns and the bloody sun casts a lengthening dark shadow across the landscape colored in gold to replicate the lucre of the trade. For Williams, the island and its attendant blocks represent a place of death. 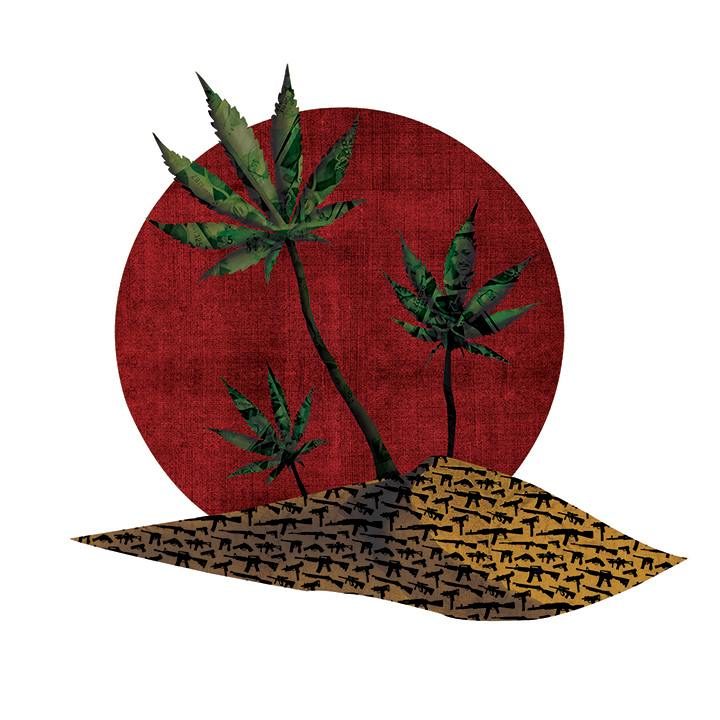 Lovell’s one-act play starts with the microcosm of the block, which Matthew Squires depicts as an open area ringed by palings, with rough and tumble furniture made from pallets, the detritus of the yard evident in discarded tyres, bottles, dilapidated furniture and the obligatory graffiti. This realist representation captures the environment well. Squires borrows from the Greek tradition of the periaktoi with a pivoting series of flats upstage that become the walls of the club when the scene changes except for the hospital scene where it is most needed. This vista’s crudeness is seemingly a mirror of the roughness of the people in it and while the play seems to offer an escape of sorts through communitas and the love of poetry, inevitably the pressure of outside forces gathers to destroy any sense of progress.
Williams also addresses these circumstances in Shoe Game#1. The absence of a torso can be interpreted in two ways: as the apparent triumph of the male inhabitants of the block over adversity and material deprivation in this refusal to identify facially this success, and as the ability to surmount the odds through a display of the trappings that now define them–the popular timberland boots in ochre, with loosened laces, the gaudy watch, the taboo camouflage pants, the trunk bearing a skull in a Louis Vuitton covering to suggest omniscient death, and the superior brand of rum pouring so many red dice in an effervescent sparkle to suggest not only that the subject has to overcome many odds to achieve this sense of entitlement, but that the stiffened hand on the bottle neck is holding a penis in an assertion of the subject’s triumphant maleness. The artist foregoes faces or camouflages them in the whole series as if they are not needed to identify the archetypes in this new theatre of life. We know them all from their poses, their desire to be noticed, from their curious affront to the system that neglects them. 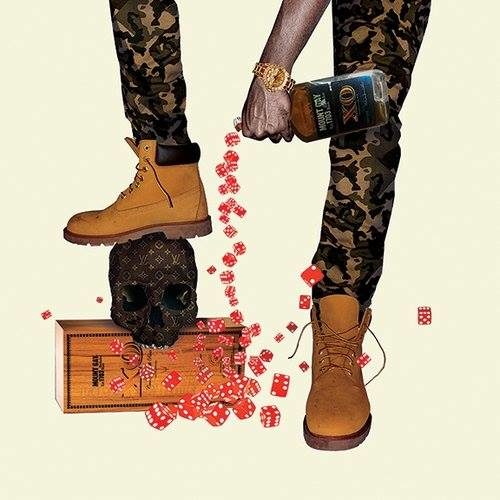 Where Williams expresses what seems like disdain for the cheapening of human existence that the block represents, On The Block takes a different perspective, through the costuming, the sound design, lighting, and the staging of the play. There is no bling signifying the ostentation of these dwellers. They are still open to change and redemption as Lovell shows by the play’s end. Most seem to be living at home and just pass through for the occasional lime, to smoke, drink, and converse with and learn from Goose when he was alive. The dress of the opening reflects some of Williams’ ideas about the social status the block members have achieved but these trappings are not sustained. The use of the red suggests rebellion and bravado, on one hand, but on the other, alludes to the spectre of HIV/AIDS infection which has touched this community through Goose. This contrasts vividly with the later choices where the dress is stripped down to reflect the homeliness of the people via their apparel.

The lighting carries a murkiness for the scenes where Goose loses his life and Boyland meets the policeman Edwards after midnight. Generally, there is little brightness except for the ending and these choices by the lighting designer Shad Stuart convey well that this block carries a sense of foreboding.
As the play progresses we see the playwright’s intention: to offer a balm, an outlet for the out-of-sorts youths shocked by Goose’s sudden death and left destitute from his passing. This is through their reliance on poetry to express their deep feelings about their lives. However, the power of the poetry is never explored especially at the end where the block community engages in a slam to commemorate Goose’s passing. The director chooses to arrange his players in a semi-circle in recitative mode. There is no experimentation with the energy such slams produce, no attempt to give the characters a distinctive poetic voice and no involvement of the audience on either of the nights I attended. Space which became limited by the many set pieces seriously curtailed meaningful movement by the players and the playwright’s vision of the space as an auction block never materializes no doubt because there is no obvious governing concept for the play. In several instances, the movement arrived at failed to communicate well motivation or intention. 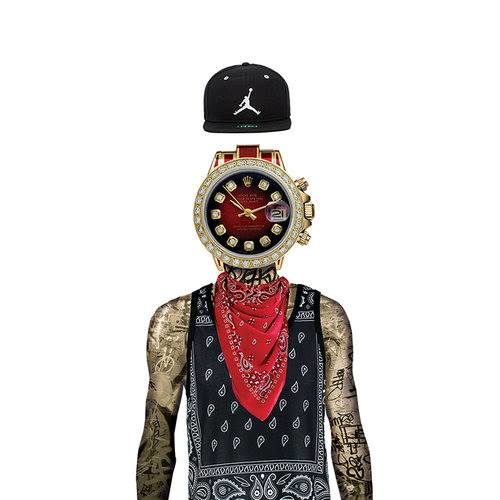 In comparison, Williams’ commentary is assertive, defiant and commanding of our attention. We are familiar with the popularity of the tattooed body which becomes a canvas for a variety of social statements or personal sentiments. The block is one place we will find this three-dimensional form where the wearer is constantly adding to the pictures being created as a form of resistance to the conforming body and its conventions. In Up 2 De Time the upper torso bears a watch face for a head with a suspended cap with its brand name logo. While the body is decked with the scarves associated with the gang world, the replacement of the face with a flashy timepiece comment on the temporal nature of the persona who in attaining his success forfeits his life. This depiction confirms one of the realities of block life, not explored in the play. 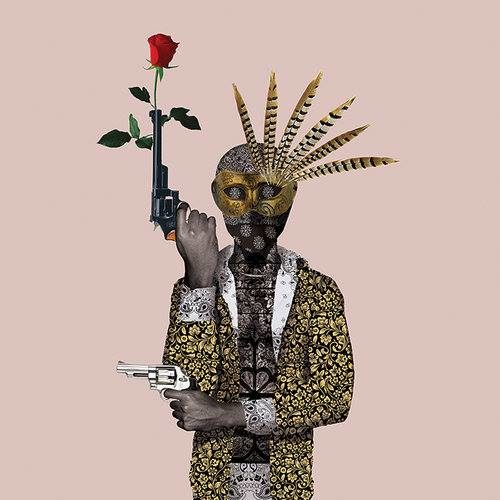 This article originally appeared in Capital Critics’ Circle on May 26, 2018, and has been reposted with permission.