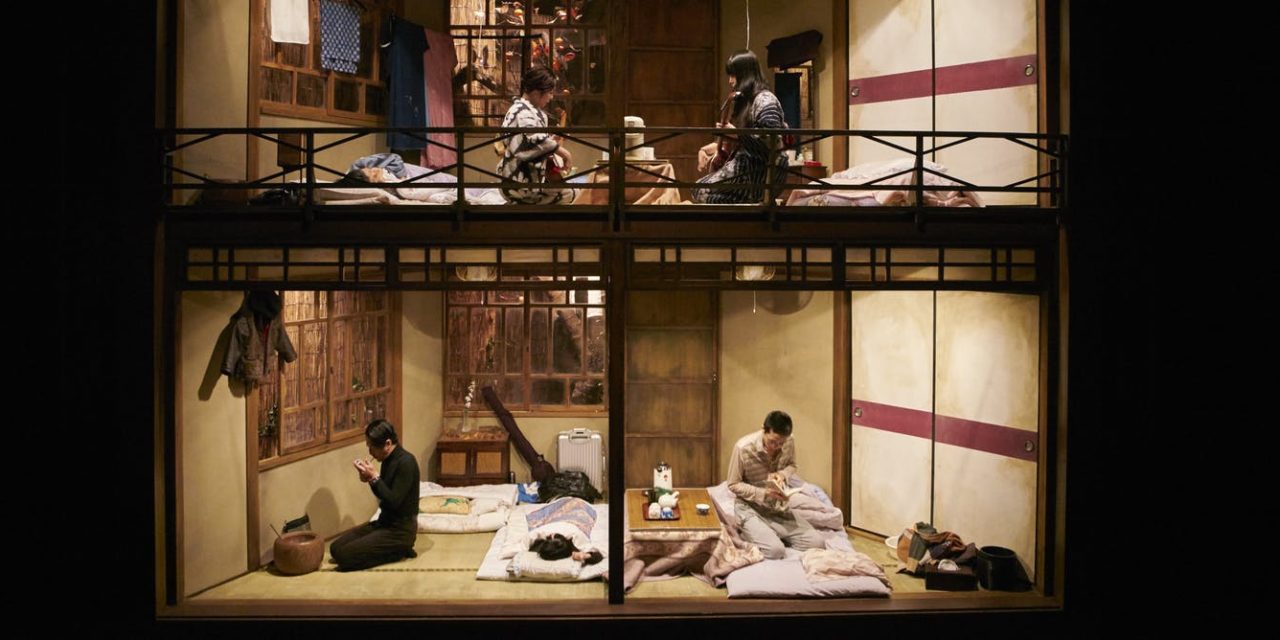 The four rooms of a Japanese ryokan revealed in "The Dark Inn" |Photo Credits: Shinsuke Sugino

The darkness of the human condition, where people are enslaved by their own desires in a kind of Buddhist hell, may not seem like a pleasant subject for an evening of theatre. But in The Dark Inn, Japan’s brilliant playwright-director Kuro Tanino and his company, Niwa Gekidan Penino, give these themes a captivating and at times mesmerizing contemporary updating.

The inability to let go of desire is one of the oldest themes in Japanese drama. Tanino’s play draws on the ancient Japanese form of Nō drama. Tanino’s story begins with two puppeteers from Tokyo coming to a traditional Japanese mountain inn, known as a ryokan, where people come to take in the healing properties of heated, mineral-laden waters bubbling up from volcanic formations below. It is late autumn, and the men believe they have been invited to perform at the inn. But the inn is deserted.

We discover that the older man, a dwarf (played by veteran actor Mame Yamada), is the father of the other man, who, as we come to see, anticipates and attends to his father’s every need. The size difference between the two heightens one’s sense of the son’s subservience to his father and of his permanent state of arrested social development. Both smoke, heavily, and rarely has smoking ever appeared so necessary and even seductive on stage.

After settling into the empty room, the men are met by an old lady. She tells the pair that there is no proprietor and that the inn is inhabited by “guests” who seem to simply need to be there.

The story of the guests they encounter is subsequently revealed on a superb revolving stage by Tanino and designer Michiko Inada. It features four astonishingly realistic spaces found in such a ryokan: the entry room; a two-level sleeping area; the washroom where guests prepare to enter the bath; and the onsen, or spa, where the guests soak in the mountain-heated waters.

We are introduced to a blind man who believes the heated waters help his vision and who is consumed by his desire to see. Two geishas are both trapped by desire; the younger of the two is given over to lust. The mute bath attendant serves others but his fascination with the new guests goes beyond mere voyeurism. Finally, the old lady, who is devoted to the two geishas but was unable to be one herself because she “wasn’t pretty enough.”

The play’s visual field is so rich and detailed, while the characters are so clearly defined, that at times the viewer’s attention hovers equally between the set, the nuanced and sometimes surprisingly bizarre behavior of the guests, and the translation of the Japanese spoken text appearing on either side of the stage.

Adding another layer to the experience is a rich but subtle sound design by Koji Sato and Yoshihiro Nakamura. It beautifully captures and draws out the sounds of a ticking clock, the pouring of liquid from a thermos, the running of natural spring water, and the ominous sounds of someone clumping slowly down a set of stairs.

The play’s action peaks as the puppeteers finally perform at the insistence of the geishas, both noisily drunk on sake. We see revealed, for the first time, the puppet, a grotesque homunculus, whose enslavement to his physical needs is mirrored by the exaggerated size of his head, hands, and facial features. The “show,” a grotesque and carnal ritual between the father and puppet, leads to the play’s final scene, set ten months later in summer, which suggests that these guests, like all humans, are unable to recognize the desires that trap them.

We hear the speeding sound of the bullet train, which passes by the once-remote ryokan. Far from suggesting that modernity will change the human condition, the voice-over assures us that the ryokan is now “waiting for your visit.” The sound of a bell rings, and we in the audience are invited into that world ourselves.

The Dark Inn was staged as part of the OzAsia Festival, running until October 8. 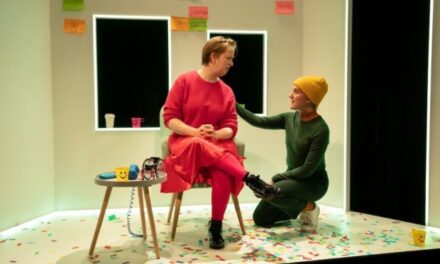