In theatre-making, we often talk about world creation. “What is the world of the play?” teachers seriously ask their students, and dramaturgs their directors. This is because the process of making theatre is, in a very fundamental way, a process of building a complete universe in an empty black box: 19th-century Russia; Renaissance Venice in the imagination of the Elizabethan England; the existential wasteland post-WWII; and so on.

These worlds are built with only a few tools: light, costume, humans and their words, sound, a backdrop or relatively spare props; and this world-making with a very reduced palette are, in essence, the magic of theatre.

Halory Goerger and Antoine Defoort’s Germinal, staged as part of the Melbourne Festival, takes this world-building concept to the extreme, by making it the central conceit of the show: four performers on an almost bare stage have 80 minutes to build the known world from scratch. Where does one begin? At times mind-boggling, at times absurd, it is a joyous event, light but scintillatingly intelligent. It has enjoyed cult success, premiering at the prestigious Festival d’Avignon in 2013 and following on with seasons across Europe, Canada, the US, including at Kunstenfestivaldesarts in Belgium, Public Theater in New York, and PICA in Portland – and for a good reason.

World-making on stage is not just material, but ontological. Light, sound, space, and bodies on stage are not merely as an empirical event, but also a closed system of signifying relationships. They might form a world in which a sock is a living creature. A world in which Godot never arrives. A world in which we sing instead of speaking. For the audience, half of the fun of going to theatre is in deciphering the rules of a staged universe.

Ever since the rise of cinema, theatre has increasingly understood its essence to be this cross-stitch of sock puppets and ontology, starting at least with Ionesco, Beckett, and Grotowski. Contemporary performance since the 1990s has been particularly fascinated by experimenting with meaning-making, from British theatre group Forced Entertainment and French choreographer Jerome Bel, via Australian director Daniel Schlusser, and the recent performances of Taylor Mac at the Melbourne Festival. It is no longer controversial to ask the audience to see the most glorious worlds created with the most minimalist means; and sometimes, as in the case of Forced Ents or Schlusser, six or seven worlds at once.

However, in recent years, I have noticed an interesting convergence between this theatrical world-making and broader questions around how scientific knowledge is created, and how in turn it lays a basis for our reality. They are not naïve, anti-science works, but genuinely engagements with the way observable, empirical facts get progressively shorn of specificity and abstracted into principles. I have written elsewhere on David Weber-Krebs’ Into The Big World, an embodied choreography of this journey of lived fact into scientific principle, performed by two dancers on an almost empty stage to great effect.

Germinal is another passenger on the same bus. According to the artists themselves, it grew out of the process of deciding what the world of their performance would be–what elements would it contain, what rules would apply. Somehow, though, this initial process of dead serious world-making became the entire work, to a hilarious result.

Germinal opens like the Book of Genesis, without light. A single light bulb illuminates the space in flashes. We see glimpses: four people tinkering at consoles, and not very well. It takes them a while to understand what operates the light. It takes them longer to understand how to form their thoughts as surtitles on the backdrop. It takes them an eternity to develop speech on stage–we take a detour through telepathy, among others. From then on, the four performers go through a kind of accelerated social evolution.

In terms of technology, Halory and Antoine, and their companions Beatriz and Arnaud are working with what they have: the black walls and stage carpet, a microphone, projector, a laptop (“this book has only two pages!”), and an intercom. Their progress is less concerned with engineering invention than with the evolution of thought and consciousness. They set rules–sometimes by discovery, sometimes by agreement–and each rule gives more detail to their world, while also narrowing their options down.

Rather early on, the question of being oneself, separate from others, is raised–and it becomes very pertinent when they are trying to decide how to divide one mic across four performers! At one point, they embark on listing what they know so far and agree that categories would make it easier to remember everything. Laboriously, they agree that things “that go pocpoc” when you hit them are somehow fundamentally different from “things that don’t go pocpoc,” such as light, trouble, and the joy of being together.

Then there is the phone call to a helpdesk to request a world-building starter kit: the customer service operator strongly suggest not to go without their bonus package, the four laws of thermodynamics–as she says, all living organisms use them.

Germinal has the intentional naivete of a long brainstorm, made concrete with stage props, music and projection, but it rumbles through some incredibly sophisticated concepts, and the final reveal exposes the deep architecture of what has been created.

This post originally appeared on The Conversation on October 24, 2017, and has been reposted with permission. 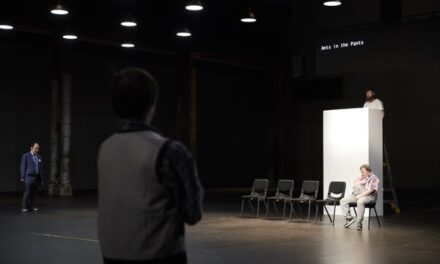 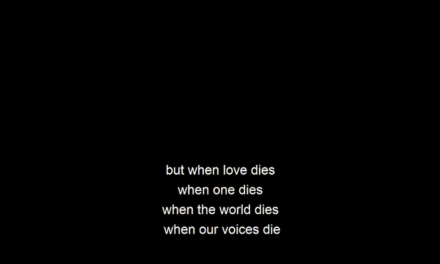