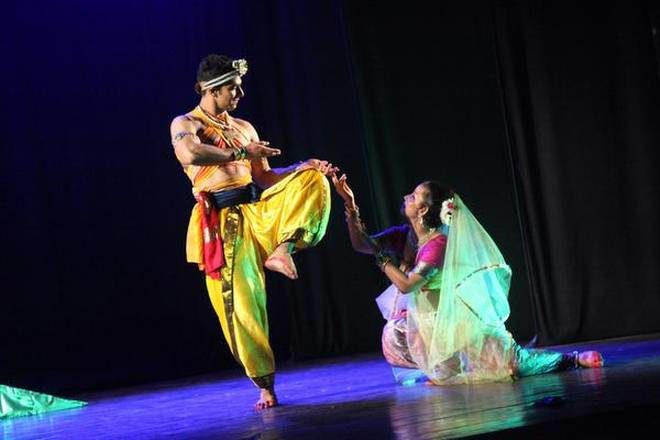 Under the direction of Bhoomikeshwar Singh, who is trained in modern theatre techniques as well as Chhau dance form, Pratibha Sanskritik Sansthan has acquired a distinct place in the theatrical landscape of New Delhi for producing Sanskrit plays in Hindi translation ever since its formation in 1987. Bhoomikeshwar is also a skilled mask maker and mime artist. As an imaginative director, one discovers a fine blend of various presentational techniques in his works. His latest production of Kalidasa’s Vikramorvashiyam, staged by the Sansthan at Shri Ram Centre auditorium this past week, is a delicately conceived theatrical piece that engrossed the audience with its complex stylization, visual beauty, and its soothing music inspired by classical ragas.

Jointly translated into Hindi by Acharya Pandit Sitaram Chaturvedi and Bharat Ratna Bhargava, the play depicts immortal love between King Pururava and Urvashi, a celestial dancer in the court of Lord Indra. The opening sequence itself evokes suspense laced with the fear of unknown. The King in his beautifully decorated chariot drawn by horses passes by a forest. Hearing cries of a woman in distress being kidnapped by a demon, the King inflicts a crushing defeat on the demon and liberates Urvashi. While sitting on the chariot both fall in love. But soon she is summoned by Indra to perform on the court. Obsessed with love of Urvashi, the King wanders to search for her. Various obstacles stand in their way of romance which set in motion highly interesting chain of events.

The King is already married. The simple-hearted queen is devoted to her husband and all that she desires is the happiness of the King and performs rituals for his happiness. A love-lorn Urvashi finds time from her duties as a dancer and both the King and Urvashi enjoy themselves in the course of their romantically exciting adventures. Once Urvashi discovers that the attention of the King is being distracted by another beautiful woman. Enraged she merges with a forest plant, forcing the King to lament and frenziedly search for her.

The action unfolds on a bare stage. Parallel to the upstage a small ramp type platform is created with a raised area in the center of the structure, which is used at times as a throne, and on different occasions as the chariot, and also as space where celestial characters descend. The vital Chhau dance movements of the performers impart intensity to the fight between the King and the demon. The director has evolved delicate human postures through the body of the performers to create the illusion of the right ambience while projecting a range of animals using masks. The traditional drum beats heightened dramatic impact and vigour to the stylized movements.

The music score by Hari Narayan Das radiates romantic sequenced lyrics rendered in a mellifluous voice punctuated with subtle and lyrical humming creates an aura of romantic beauty as a backdrop for the action. The skilful lighting effects transform the scenes between the lovers into poetic imagery.

The director has not attempted to recreate and reinterpret the original Sanskrit masterpiece. He uses classical dance form to convey the content effectively to create a harmonious theatrical piece to offer aesthetic delight.

Akshay Sharma as King Puruvava and Chitra Negi as Urvashi create striking images of lovers. Yash Upreti as Vidushak amuses the audience with his physical movements, facial expressions, and style of dialogue delivery.