The theatre lovers of Kolkata are in for a treat as they will get to watch plays from different regions at one event. Christened as International Theatre Festival, it has been organised by S.B. Park Sarbajanin which has been conducting Durga Puja in Behala of the city area for many years. Making its debut, the festival will put on board “Isi Din Isi Waqt” today with “Ashad Ka Ek Din” and “Mahajoner Nao” scheduled for Saturday and Sunday.

Describing the festival as a major step, Sarbajanin’s Cultural Secretary, Sanjoy Majumdar, says , “The aim is to give Kolkata’s theatre loving crowd a taste of plays in other languages and regions. This will make them aware of culture, sensibilities, literature and customs of other regions, creating a bridge of sorts between different groups.”

According to Sanjoy, the basic criteria of choosing the plays, is that they must leave an imprint on the audience mind. “All three plays are pregnant with deeper meanings about human emotions and convey relevant messages. Moreover, the plays should be such that viewers remember them and come back to the festival next year.”

Mumbai’s Rangalay will present Abhiram Badkamkar directed “Isi Dini Isi Waqt”. “It is a contextual tale delving on globalisation and how our life, thinking, attitude and behaviour is dominated by market forces instead of emotions and values,” says Sanjoy. Bapi Bose’s Delhi-based Circle Theatre Company will stage its popular “Ashad Ka Ek Din” written by Mohan Rakesh. This timeless classic is the romantic tale between poet Kalidas and Mallika. “Staged many times, this play remains popular as it brings to fore the importance of love in our life,” states Sanjoy.

On the final day, Subachan the group from Bangladesh will present “Mahajoner Nao” directed by Sakur Majid for the first time in Kolkata. “This will be the 107th performance by the group which has mounted the play in Russia, London and South Korea. Comparing life to a boat the insightful story highlights how both face ups and downs. It has 20 songs by Abdul Karim, the well known folk singer of Bangladesh,” reveals Sanjoy.

The festival is not being held for mere entertainment alone. It proceeds will help Sarbajanin’s NGO arm to provide books, pencils, food and clothes to children from mariginalised families and those living in hinterland like Sunderbans. “We will also provide assistance to people in the theatre industry, those who are do not come in the limelight like set designers, make up men and backstage personnel among others. This year Dulal Singha who assisted the well known designer Tapas Sen since 1962 will be provided economic assistance.”

Expressing gratitude to the theatre groups, Sanjoy discloses all they agreed to participate and contribute by charging minimum expenses. “We hope others too will be inspired as next year we want to present at least seven plays.”

This article was first published on The Hindu. Reposted with permission. Read the original article here. 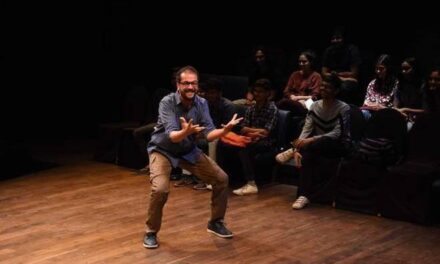