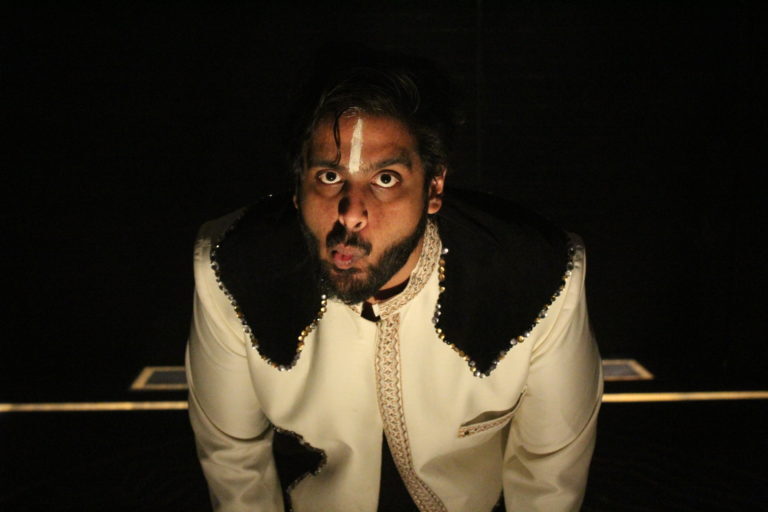 The National Arts Centre’s website calls Jivesh Parasram’s Take d Milk, Nah? a “highly-hyphenated story about the search for identity.” This is certainly the case: Parasram’s burst onto the national scene is a not-quite identity play, an Indo-Caribbean-Hindu-Canadian hour-and-a-half of reconciling experience and impact, and a nearly-incredible solo show. Take d Milk, Nah?, in its insistence on the in-between, is a landmark piece of theatre for the NAC – if not for dramaturgical finesse, then for unmistakable, commendable certainty in itself and in its own importance.

To summarize Take d Milk, Nah? in its entirety is to engage in spoiler: simply put, there are two versions of this show, depending on the extent to which you as an audience member have felt marginalized in your day-to-day existence. If you’ve navigated a life unburdened by your own identity, that’s okay; Jiv doesn’t mind, he asks simply that you acknowledge this privilege. Take d Milk, Nah? attacks its audiences with flashy technical elements and hard-to-swallow truth; in the moment, they may feel indulgent or under-planned, but in the moments (or hours or days) following the performance, these instances of existential ache resonate as the necessary affective tactics they so clearly are. This show will not be everyone’s cup of tea; Parasram knows this and creates in spite of (and perhaps because of) this discomfort. Take d Milk, Nah? is a vital piece of theatre; the conversations it has started already within Ottawa’s community make clear the gap this show has filled within Canada’s professional sphere.

Take d Milk, Nah? is a solo show; for its lovely, tongue-in-cheek acknowledgment of Canadian cliché and grant-fueled theatre, it is still a solo identity play, one which falls neatly into its own genre despite open disavowal of it. This is okay; a strong solo performance is equally as worthy of our time and consideration as more traditional NAC English Theatre fare. Its structure does, of course, present traps to which Parasram, despite charisma and instant likeability, does occasionally succumb: this show’s first two thirds at times feel like a TED Talk, a stand-up routine, an impassioned lecture. Parasram’s comic timing is excellent: he pokes at his own problematic behavior while still effectively drawing attention to our own. Whether this timing lends itself best to this structure remains to be seen, though; moments in Parasram’s storytelling beg for an ensemble, for an embodied balancing act of self, for more concrete re-imaginings of genealogy and trauma. Take d Milk, Nah? is fundamentally about navigating family and, more broadly, community; the solo structure Parasram so teases, yet actively embraces, doesn’t quite seem to get these themes across.

That the National Arts Centre has programmed such a piece as Take d Milk, Nah? into its English, Theatre season speaks to a shift in public perception of what “theatre” can be. What ten years ago might have been dismissed as an indie show incapable of drawing larger audiences has proven itself to be a powerful dark horse at the NAC, one that sets a precedent for large-scale platforming of “smaller” pieces from around Canada. Take d Milk, Nah? isn’t perfect; its “gotcha” moment is fantastic, but its first-half narrative structure struggles to find its pacing. In truth, though, that doesn’t really matter in the grand scheme of things; by the time we reach the show’s conclusion, we’re left questioning not only ourselves but the entirety of the postcolonial framework within which we’ve convinced ourselves we must operate and prosper. Parasram’s missteps are countered by intermittent moments of sometimes-heartwarming, sometimes-bittersweet, and sometimes-incommodious genius. This is a creator who fundamentally understands people and how they experience life; he has undoubtedly grown since his nearly-cow-birthing adolescence and is someone I look forward to watching grow further in forthcoming work on the national stage

This article was originally posted at capitalcriticscircle.com on January 20, 2020, and has been reposted with permission. To read the original article, click here.