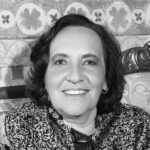 Lorena Meeser studied Mass Media & Communication at the Iberoamericana University in Mexico City. She studied theatre in Mexico, London and New York. She started Visión Empresarial Querétaro magazine to promote Mexico nationally and internationally in various sectors: tourism, theatre, industry, business, diplomacy, government and education. It is the only Queretan magazine in English and Spanish with international reach. She has made thematic magazines of several countries: Colombia, Chile, Brazil, Germany, Italy, Holland, Spain, Ireland, India, Finland, Thailand, Russia, Japan, Korea, Singapore, Canada, Saudi Arabia, and Marroco. Since the beginning of the publication, the magazine won several awards from national and international governments. Lorena has been invited to India, the United States, Thailand, Singapore and Germany to publish reports of their main tourist destinations in order to promote them in Mexico.  Lorena has been writing theatrical critiques for over 25 years for many publications, including Novedades, a.m. of Querétaro, El Universal, Maxwell, La Costa, MAS Advertising, Creative Concept, Side X Side, Tecamachalco Magazine, Polanco Magazine, Destinos del Aire, Speed & Luxury, Medical News and Tour. Nowadays she has a theatre section at the magazine Visión Empresarial Querétaro. She has also done a several newscasts with the section "De Vivencia en Vivencia" narrating travel experiences and making informative caps on theatre, tourism and gastronomy.  She was President of the World Association of Women Journalists and Writers and coordinated the publication of the book Memoria de lo diverso a 16 voces. Lorena has given lectures on theatre at various educational institutions such as Instituto Tecnológico de Monterrey, Universidad Autónoma de Querétaro and Universidad del Valle de Mexico, among many others.  Currently, she is writing her first novel, Mujeres Amad.

A wonderful experience of intimate theatre. Distancias Cortas is a scenic production that presents...

Kiss Of The Spider Woman is splendidly directed by Miguel Septién, an excellent director who...

Fifteen years after the premiere of the Mexican theatrical mise-en-scène of Les Miserables, it...

The Glass Menagerie is a masterpiece work of Tennessee Williams, it is a jewel of world...

Inspired by the Edward Snowden case, James Graham’s Privacy shows us the consequences of...

A Special Day is based on the 1977 film Una Giornata Particolare by Ettore Scola, starring Sophia...

Leticia Huijara’s theatrical piece When There Were Grenades In November is being presented...

Icaro Compañía Teatral in Mexico presents Julius Caesar the adaptation of the work of William...