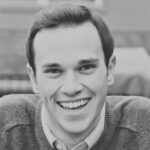 John Brunner, originally from Rogers, Arkansas, is a director and dramaturg located in New York City. A graduate of Bucknell University, John studied theater and political science while also minoring in French. During his senior year, he completed an honors thesis production of Sarah Ruhl’s Dead Man’s Cell Phone. John studied abroad in Tours, France where he worked with French-speaking actors on an English production of Shakespeare’s Measure for Measure. John has worked with directors and playwrights to develop and produce new plays in New York City and had worked with The CRY HAVOC Company and PlayCo. John has also worked professionally in radio for Top 40, light FM, and AM news radio stations. He was last heard on WQKX and WKOK in Sunbury, Pennsylvania. John is currently an MFA in Dramaturgy candidate at Columbia University School of the Arts where he also serves as the President of the Interdisciplinary Arts Council.

After seven months of dialogue and organization, a group of “more than 150 policymakers, artists,...

On September 7, 1964, during an NBC Monday night movie, the democratic campaign to reelect...

It opens with a manic attempt to clean. The sheets, the floors, the smell of the air, everything...

Is the truth always best or should some secrets go to the grave? For playwright Paul David Young,...