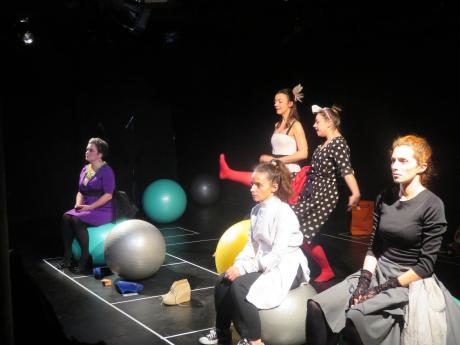 On the nights of November 18 & November 20, 2016, at Here Arts Centre, NYC, I was being reminded why I am proud to be part of the wave of young Romanian female artists and that our life matters too. As an international female artist in NYC, I am lately more interested and aware of subjects like diversity, giving female voices equal rights, (as well in theatre and film), benefiting with equal space and rewards, no matter her racial, cultural background, sexual, or religious orientation. Therefore, I was very eager and curious to go see two plays, Ibsen Incorporated – The School Corporation and Me. A Dollhouse, part of “The Future is Feminine – New Voices in Romanian theater,” the American tour of some of the contemporary Romanian female artists who wanted to make their voices heard at Here Arts Centre… here, across the ocean. The project’s obvious aim to empower women artists in Romania and Eastern Europe turned out to be a success!

Despite the fear that such controversial shows would not resonate with the American audiences/public, the project came “at the right moment and at the right place,” considering that the USA is now going through some social and political changes. This tour landed in the midst of some important events, right after the USA having their first black president in their history, just missed the opportunity to have their first female president elected, and, gosh, that was so close! A march was scheduled at the beginning of 2017, in Washington, which was dedicated to Female Rights, with the mission to empower females everywhere, make their voices heard once and for all!

And what theme could’ve been more suitable for the tour, than Ibsen, who, in 1898, was asked to give a speech to the Norwegian Association for Women’s Rights. He disclaimed, thou, the honor of “having consciously worked for the women’s rights movement,” since he wrote “without any conscious thought of making propaganda,” his task having been “the description of humanity.” Ironically or not, here it is, a century and a half later, history is giving him a chance to change his mind. Even if he did a wonderful job by portraying the situations so faithfully, we couldn’t have asked for better proof of how women were oppressed for centuries, and this thing needs to be changed. I incline to believe, thou, that Mr. Ibsen, given the historical circumstances, couldn’t proclaim himself a feminist, and get thus into even more trouble than he did already, writing such controversial plays. And therefore, it is for us to decide whatever we want to believe regarding which side he was on.

Ibsen Incorporated – The School Corporation, this “manifesto piece,” if I may say, was directed by Catinca Draganescu, and had the following cast of actor-performers: Dana Voicu, Elena Popa, Valentina Zaharia, Silvana Negrutiu, and Ana Turos. Constructed on a less dynamic action, Me. A Dollhouse – Nora Remix (which was inspired by Ibsen’s A Doll’s House, this “dark epopeya” combining visual poetry with songs focusing on the inner journey of an oppressed women (the voice of a nation), who left her husband, was directed by Carmen Livia Vidu, with Aura Calarasu playing Nora, accompanied by the performance of the Soprano Catalina Antal.

Since Ibsen had contributed to the development of an ideological and political theatre, that’s what we saw happening in these two shows: playing with ideas. This was more obvious in Ibsen Incorporated, which presented some of the main ideas the Romanian society was built on under Communism and the period right after, or even 25 years later, ideas that the society is actually confronting with globally, forever. The suppression of the female individuality in a male constructed society/world is just an example. “A rare example of devised theatre on the Romanian stage,” Ibsen Incorporated is, to quote Catinca Draganescu, “a way to investigate the influence of the capitalist society on the fundamental inter-humane relationships and the way these relationships are reimagined today.” As the title suggests, Ibsen Incorporated presents different stereotypes of women forming the ground of today’s corporate society, translated in the way they were being objectified for centuries: as a sexual object, as a wife, mom, or career woman, with an enormous capacity of pleasing which always crossed her identity, and always in tune with the norms. Obviously her mission is to pass along the “information kit” she received, further to her daughters.

The acting of the female performers was on point; they almost succeeded in making us love those characters, despite the brutality of the truth they were portraying. The show slowly became more interactive, the public being seduced into a game, which helped give even more context to the ideas thrown mercilessly at the audiences. The dynamic crescendo of the show culminated with a reality show, so common in the nowadays Media…And as we know, Media mirrors the society, its false values, based on the same objectification of the female and the power of money. Catinca Draganescu diligently used the live recording in order to point out those ideas, with the help of the brilliance and the spontaneity of her talented actresses.

While Ibsen Incorporated “incorporated” more theatrical elements – dance, songs, live recording, suspense, game, and interaction with its public – which were thrown at its audiences piece by piece, little by little, similar to a volcano when it erupts.

Me. A Doll House- Nora Remix felt exactly the opposite. Dark, slow, stretched, the time felt dilated as if you’ve entered a new dimension. In the center of the play we had Nora, sitting like a mermaid mid-stage, her yellow long hair, pouring in waves on her shoulders, her linear voice would seduce and poise your soul at the same time. Cursed is the one who listens to her story because it’s so true, it hurts! Her poem would break from time to time into a song, obviously not from this world, performed in a low-key by a Soprano, the mesmerizing Catalina Antal, a bigheaded Puppet wearing a long red dress. The story is inspired by Nora, from Ibsen’s famous play A Doll’s House, and combines noir film projections with live music. After having worked closely with Carmen Livia Vidu to reconstruct Nora, Aura Calarasu brought to life an almost hypnotic performance inspired by the relationship they developed. The results are a story since the beginning of the world, a “Remix”, about a woman who tried to break out of a poisonous system and faced resistance.

Curious enough, as I found out at the Round Table hosted by the theatre critic Cristina Modreanu for the tour Future is Feminine, neither of the plays are representative for the theatre that is performed now in Romania.

This article was originally published on Revista Scena.ro. Reposted with permission. Read the original article.