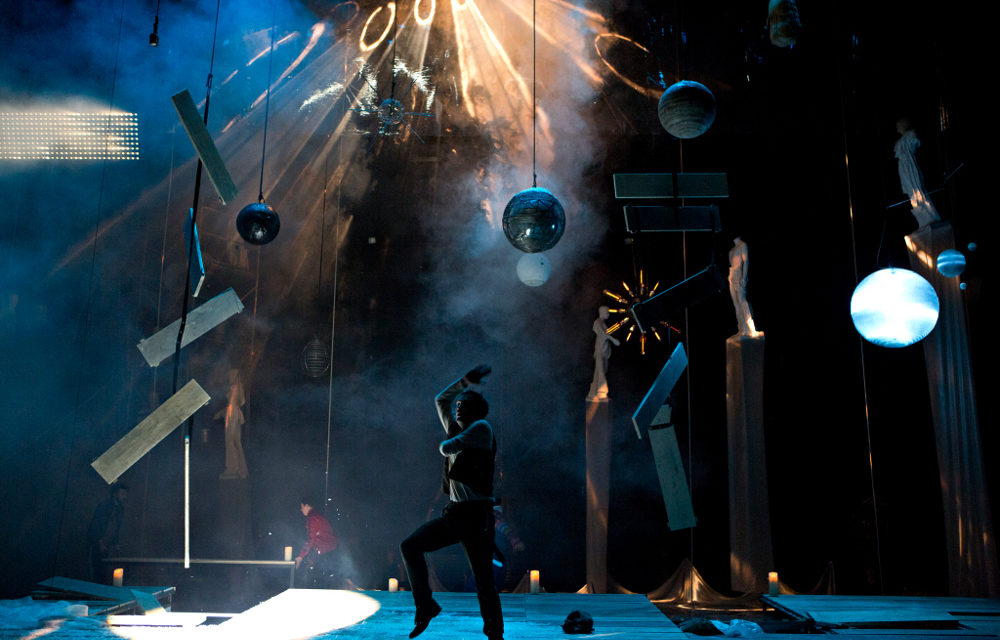 The origin of the figure of Don Juan and, at the same time, of the related Statue of the Commander in Spain is very stratified both from a literary and anthropological-legendary point of view. The work attributed to Tirso de Molina (El burlador de Sevilla y convidado de piedra, preserved in a version published in 1630), even if it is the first in which it is possible to clearly recognize the figure of Don Juan, seems to arise from a previous stage version of the myth, Tan largo me lo fiáis attributed to Andrés de Claramonte and staged in 1617 by the company of Jerónimo Sánchez Córdoba.[i]

From an anthropological point of view, although the myth of the Burlador de Sevilla and the Statue of the Commander seem to belong to real figures of the Sevillian imagination (it is impossible, for obvious historical reasons, to relate it to the real figure of Miguel de Manara, born in 1617, as suggested by many), and antecedents to Don Juan have to be found in the Arab context, particularly in Imru al-Qays, who lived during the fifth century, as stated by Victor Said Armesto.[ii]

If Il convitato di pietra by Onofrio Gilberto can be studied only through indirect data and sources, the text by Andrea Perrucci and the semi-serious work by Lorenzi and Tritto can be read and put in a comparative relationship to the original by Tirso, noting variants of the myth and aspects of staging and popular success, at the time of their first performance, important for understanding the spread of the myth of the Statue of the Commander in Naples.

Specifically, in Il convitato di pietra, Andrea Perrucci, same author of the popularization of the Nativity scene in La cantata dei pastori (1698), as stated by Roberto De Simone, makes the first of a series of remakes and adaptations, not always declared, and that is in itself a domestication and popularisation of the theatrical myth of Don Juan that brings to the stage, along with Don Juan and the Statue of the Commander, also the Neapolitan mask of Pulcinella and other figures of  folk tradition, in a mixture of different languages depending on the different social classes of the audience.[vi]

However, in the same city, there is another kind of adaptation of Don Juan that can be considered, in other words, an adaptation of the theatrical myth into a popular culture and folklore, almost showing a reverse trajectory: not anymore the legend who becomes a theatre plot or character, but the character who becomes legendary.

It is a clear popular “domestication” of the myth of Don Juan’s Statue of the Commander, what has happened through the centuries in the Fontanelle Cemetery (“Cimitero delle Fontanelle”) in Naples. 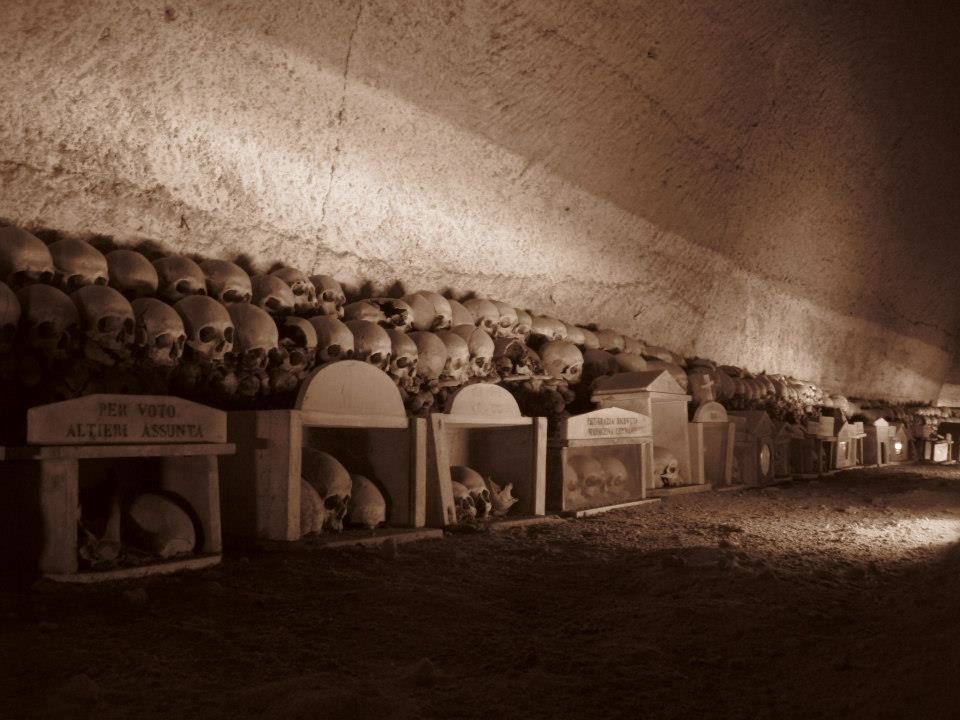 First of all is necessary to spend few words on the Cemetery. One of the most “sacred” places for the Neapolitan population, the Fontanelle Cemetery is an historical ossuary located in a cave in the tuff hillside in the homonymous “Via Fontanelle” (Fontanelle Street) in the districts of Rione Sanità and Materdei, two of the most ancient areas of the city.[vii]  It is an area of more than 3,000 square meters and with a volume, as a cave, of 30,000 cubic meters. 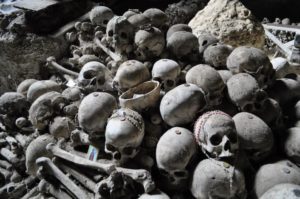 When the Spanish moved into the city in the early 16th century, moves had been taken to locate graves outside of the city walls, due to the concern over where to locate cemeteries. Many Neapolitans, however, insisted on being interred in their local churches. To make space in the churches for the newly interred, undertakers started removing earlier remains outside the city to the cave, the future Fontanelle Cemetery. Thousands of anonymous corpses, victims of the great plague of 1656 were interred there in the first great deposit.

Over many decades, the Fontanelle Cemetery became the unofficial final resting place for the indigent of the city and it became an official cemetery in the early 19th century under the French domination of Naples. In 1837, after an epidemic of cholera, there was the last deposit of great numbers in the ossuary. In 1872, the first modern cataloguing of the remains in the Cemetery was made by Father Gaetano Barbati. Currently, according to the catalogues, more than 40,000 people have been buried in the Fontanelle Cemetery. Many remains, mainly skulls, are visible and placed on the surface of the cemetery, stored in makeshift crypts, in boxes (called “scarabattole” in Neapolitan) and on wooden racks, but it is known that beneath the total area of the cemetery there are at least 10 meters of bones, skeletons, and skulls. 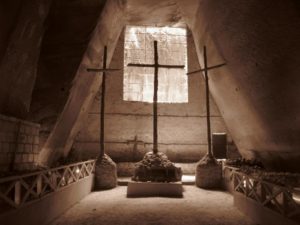 To the Fontanelle Cemetery, as well as to other ossuaries in Naples, such as the one of the Church of Santa Maria delle Anime del Purgatorio ad Arco (simply Purgatorio ad Arco), is connected a spontaneous cult of devotion, with the devotees who pay visits to the skulls, adopt and clean them, giving to the unnamed skulls a new name. The goal of this “cult of adoption” is to ask grace for the soul of the skull and to make the skull/soul work hard to reach Heaven. This cult is due to the same identity of the city of Naples, that is openly devoted to Purgatory and, for this reason, never completely lost and not already in paradise. An example of this, in the Fontanelle Cemetery, is the “Donna Concetta” skull, together with the one of the Captain.  Of all the remains located in the cemetery, “Donna Concetta” is the only skull not covered by dust, but, instead, seems to be wet. According to folklore, the skull of Donna Concetta is sweating.  This means that the soul connected to the skull is working very hard for the grace of all the devotees to move from Purgatory to  Paradise.

In 1969, Cardinal Ursi of Naples decided that such devotion had degenerated into fetishism and ordered the cemetery to be closed. However, it reopened in recent years and even today it is possible to see vows and offerings to the skulls.

After having briefly examined the Statue of the Commander in Naples from a theatrical perspective and given an overview at the Cemetery, it is interesting to consider the popularization of the myth, focusing on the legend of the “skull of the Captain,” directly related the Fontanelle Cemetery, where the skull is located.

There are two main versions of the legend. In the first one, there is the devotion of a young girl for the skull of a Captain, that was the remains of the man who had been her previous love. The girl used to go regularly to the cemetery, praying to feel closer to the soul of her past love and asking for grace. According to legend, her new boyfriend, who was skeptical and jealous of the weird relationship established by the girl, decided one day to accompany his future bride to the cemetery, taking a bamboo stick with him. The man drove it into the eye of the skull and, laughing, invited the soul of the Captain to attend their upcoming marriage. On the wedding day, a man dressed as a policeman appeared among the guests. Intrigued by this presence, the groom asked who he was, and the mysterious guest responded that the invitation had come directly from him, who had addressed him while the man was blinded in one of his eyes; having said that, the guest undressed showing himself for what he was, a skeleton, thereby causing the death of the couple on the spot.

The other version, collected by Roberto De Simone,[viii] stages a popular black legend in which the relationship with Don Juan, as well as with the Statue of the Commander, is even more clear: a young member of Camorra (the Neapolitan Mafia), a womanizer and perjurer, dared desecrate the Fontanelle Cemetery, having sex there with a girl. Suddenly, he heard a voice that scolded him. However he, without any respect for the dead, responded that he was not afraid. To the oaths of the Captain, the man challenged the soul to appear in person on the day of his wedding. At the wedding feast, a figure dressed in black, unknown to everyone, stern and taciturn, was among the other guests. At the end of the lunch, invited to declare his identity, the mysterious figure stated that he had a gift for the new couple, but he wanted to show this gift only to them. The spouses met him in a private room where the young man finally recognizes the Captain. The Captain shook their hands and, on contact, the couple fell dead instantly.

In both versions of the legend of Captain, despite the substantial discrepancies, there is a clear line from the myth of the rake punished and the Statue of the Commander, which here becomes not a guest made of stone but of bones. However, this relationship is only superficially and briefly mentioned in the various studies dedicated to the Fontanelle Cemetery, although there are some contributions, including De Simone and Lombardi Satriani-Scafoglio,[ix] on Don Juan and  Neapolitan culture, and Marino Niola, in his Il purgatorio a Napoli (2002),[x] seems to devote a few pages to the correlation between the legend of the Captain and that of Don Juan and the Statue of the Commander.

After having dwelt on the figure of the groom, as well as on the stick that he brings with him, making it comparable to the lame figure present in many mythologies, Niola looks at the legend of the Captain comparing it to Don Juan and the Statue of the Commander, but also in the wider context of European legends related to the theme of the banquet and the invitation to dead people,[xi] more than to the specific figure of the rake punished (such as Don Juan). Niola, quoting Jean Rousset,[xii] recognizes two narrative modules in Don Juan: the first one concerns the folk legend of the offence to dead people, based on the 16th-century theological debate; the second focuses on the story of the seducer.

Beyond what Niola wrote, however, two other elements, not taken into account by the anthropologist, have to be considered in the origin of the legend of the skull of Captain: firstly, the aforementioned presence of theatrical adaptations of the play attributed to Tirso de Molina in the Neapolitan area, and, in addition to them, the many scripts that the artists of the “Commedia dell’Arte” staged by the late 17th century[xiii] and the productions for  puppetry and puppet performances.

Secondly,  the date of establishment of the Fontanelle Cemetery is important, the cemetery whose tuff caves were used to bury unnamed dead people since the plague in 1656, just two years after the first Neapolitan version of Il convitato di pietra by Onofrio Gilberto and a few years before the version by Andrea Perrucci.

This article is adapted from the essay: A. Rotondi, “Encounter with the Skull of the Captain: Fontanelle Cemetery and the Popularization of the Statue of the Commander in Naples,” in AGS QUARTERLY, Volume 40, Number 1, Spring 2016. Reposted with permission of the author.

Unless otherwise noted, photos taken by the author.