When does desire give way to fixation, compulsion, addiction? In Yngvild Aspeli’s exquisite show Ashes, these tendencies are at the root of two seemingly opposed pursuits: creation and destruction. Ashes is a production of Aspeli’s company Plexus Polaire which uses emotive, nearly life-size puppets to tell a haunting story about obsession and inherited trauma. Two stories actually. Puppets they represent the residents of Finsland village, in 1978, when a young man goes on an arson spree. (It’s a notorious true story which also inspired the 2010 novel Before I Burn by Gaute Heivoll.) Some forty years later, that is, today, another young man in Finsland, this one a human actor, Viktor Lukawski, portraying a writer, has become obsessed with the fires. The action jumps back and forth as the writer endeavors to tell the story–a story about the destruction of a town and a human psyche–in a way that is meaningful, or at least comprehensible.

No one in the play has a name, and there is hardly any dialogue. What language we do get is the text of the writer’s work-in-progress, which is projected onto a screen as he types it, settling and floating away like ashes in the sky. The words share the space above the stage with miniature houses, white, one by one lit up with paper flames from the inside.

The writer’s attachment to this story is more than geographic; he shares with the arsonist certain aspects of a psychological profile. Both have issues with their fathers. The writer is struggling to tell his dad that he will not, after all, become a lawyer, while the arsonist’s dad is the local fire chief. (I choose to think of this as an example of what the literary critic Harold Bloom termed “the anxiety of influence”–the writer’s need to overturn his predecessor–rather than an extreme act of youthful rebellion.) Both are shown negotiating with angels and devils on their shoulders. For the arsonist, it’s puppeteers alternatingly chiding and coaxing him. For the writer, it’s a tiny version of the arsonist puppet, trying to hijack the narrative.

And both are increasingly in the grips of addiction. The arsonist does not set the town ablaze all at once. He starts his fires night after night, seeking satisfaction but unable to stop himself. And the fuel to the writer’s fire is alcohol, the bottles that crowd his desk echoing the drum of gasoline the arsonist carries and lovingly strokes. Whereas the arsonist interacts with his parents and the townspeople, all puppets, the writer is alone with his obsession. In one balletic sequence, steins of frothy beer dance around him. He can neither drink them down nor control their movements. He may think that drinking will unlock his creativity–see Leslie Jamison’s The Recovering for an analysis of writers who have suffered under this delusion–but in fact, it’s trapping him. He might ask himself, “Am I a man? Or am I a Muppet?”

The puppetry is sensational. When, at the end of the show, only three performers appeared for a curtain call, (Lukawski, plus Aitor Sanz Juanes and Laetitia Labre), I was stunned that so few hands made so much happen. The puppets, crafted by Aspeli with help from Polina Borisova and Sébastien Puech, are not lifelike so much as a distillation of human life. The arsonist’s browbeaten mother, his baffled father, his victims, all of them wrinkled and weathered. The arsonist himself grows in size as the play goes on as if his destructive acts make him larger and more powerful. His scraggly red hair is shorthand for evil. They reminded me of the animated figures from Charlie Kaufman’s film Anomalisa, but I actually cared about them. The one exception is a giant, demonic, hulking wolf who represents the dark temptation that taunts both protagonists. Unfortunately, like an inflatable union rat, it’s too silly to be effective.

Ashes is a multi-national production. Its run at HERE is supported by the Jim Henson Foundation and the American-Scandinavian Foundation. Aspeli is Norwegian but Plexus Polaire is a French company, and I think I was seated next to some kind of French diplomats when I saw the show. Yet the story is at once specific to Norway, even to one infamous village, and universal. Who among us hasn’t felt tempted to destroy, sometimes something external, more often internal? Obsessive thinking and compulsive behavior can pervert a once healthy interest or activity and hijack our sense of self. Some researchers propose that addiction alters our neural pathways so that the climb between stimulus and reward grows ever steeper. Spoiler alert: we never find out why the arsonist started his first fire. But the mystery remains irresistibly, dangerously tantalizing. It’s a story that transfixes, like the sight of a blazing bonfire. 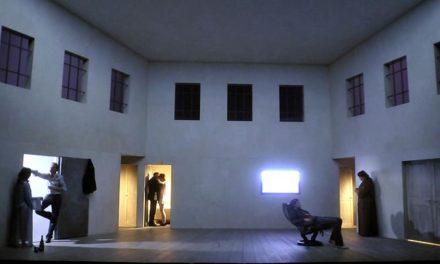 The Making Of La Dramaturgie In France