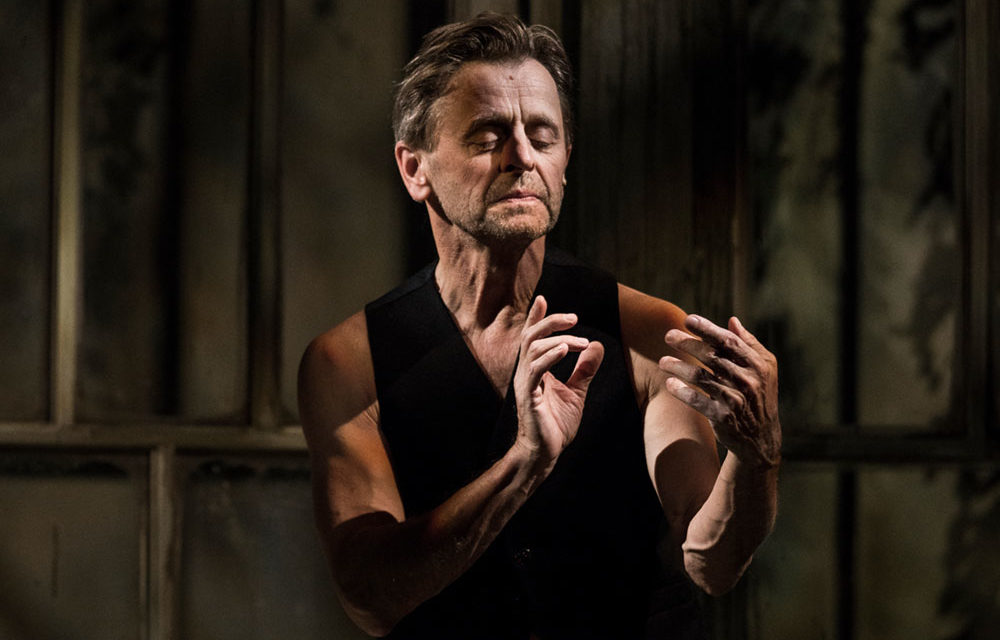 In scholarly debates on contemporary theatre, the question about language has primary importance. Critics as well as scholars, interested in diversity on stage, often discuss the advantages and the limitations of using two or more languages, the working of surtitles, and the rules of hospitality when a producing company decides not to translate their productions to the host audience.

Brodsky/Baryshnikov (directed by Alvis Hermanis) that played this weekend in Toronto’s Winter Garden Theatre, with Mikhail Baryshnikov on stage reciting the poetry of his close friend and recipient of the 1987 Noble Prize in Literature, Joseph Brodsky, is proof in point. In fact, I am convinced, this is the show where knowledge of the Russian language is the key to its full and true enjoyment.

This is not to say that Brodsky/Baryshnikov was inaccessible in its imagery or communication methods to non-Russian speakers. (The performance in Russian had detailed English surtitles by Jamey Gambrell). I simply feel that to be fully engaged and immersed in the complex or even baroque cadence, in the imagery and references for which Brodsky poetry is famous, one would need to have a solid knowledge of Russian. As a native speaker of the Russian language and an admirer of the work of both artists, I was able to fully appreciate the intricate and the delicate balance of words and movements that created a mesmerizing, shimmering effect of a new world coming alive on stage.

In fact, there were four equally important elements of his show: Brodsky’s poetry, Baryshnikov’s onstage presence (both as a moving body and as a voice reciting Brodsky’s poems), lighting design, and space. The latter consisted of a transparent pavilion or gazebo, which became both the real and the figurative meeting point for the past and the present, memory and imagination, life and death.

The play begins with Baryshnikov appearing at the far side of the pavilion, slowly crossing it and reappearing through the central doors at the front of the stage. Dressed in a suit and holding an old-fashioned suitcase, Baryshnikov emerges as a quintessential figure of exile, a prodigal traveler, taking a trip home. In the suitcase, there are books of poetry, an old-fashioned alarm-clock, and a bottle of Jameson whiskey: everything an exilic artist might need on his journey back through memory lane.

The themes of exile, the impossibility of return, nostalgia, and fragility of one’s memory are some of the leading topics that mark Brodsky’s poetry and this production. This return, however, is much too complex. Brodsky died in 1996 in New York, a Russian poet in exile, who had decided not to travel back home, even after the collapse of the Soviet Union. Despite his old friends’ and new followers’ awaiting his return, Brodsky dreamed of his poetry’s comeback, not his own. And that comeback has indeed taken place, with Brodsky’s poetry now holding one of the greatest places in the Russian poetic Parnassus, next to Alexander Pushkin.

Brodsky/Baryshnikov is about this return as well. The traveler is possibly Baryshnikov himself, who comes back to his own place of birth, Riga (where the show was created and premiered at The New Riga Theatre in 2015), to reconcile himself with his past. Theatre turns into the place of a true homecoming. For the dancer, for the poet, and for the poetry itself, it is only through a theatre performance a true encounter with the artist’s audience that reconciliation can take place.

Visually, the gazebo (designed by Kristine Jurjane) is called up to evoke the famous Summer Gardens in St. Petersburg (former Leningrad), one of the re-occurring protagonists of Brodsky’s poetry, with its lonely benches and small summer pavilions designed for a strolling poet or a pair of young lovers to find a brief rest or a secret rendezvous. Now, the gazebo is deserted. In its sad emptiness, it holds memories of the past and a promise of the meeting with the impossible. The dancer/traveler steps into this space of melancholia to seek the past and to muse about the present.

Designed as an Art Nouveau structure, this transparent pavilion also functions as a time machine. When Baryshnikov steps inside it, we hear his pre-recorded voice reciting Brodsky’s poems and watch his body sketching an intricate pattern of movements, intended to evoke the images of the poet’s native city, his loved ones and enemies, his nightmares and his fantasies. These shimmering outlines suggest the magic powers of this pavilion, which also functions as a metaphor of the poet’s mind and eventually the place of his entombment.

Aging, dying, the futility of life, stillness, dust, and water as a keeper of eternity, time of eternity, are the defining themes of the selection of poems offered in the production. Dramaturgically, there is a circular movement from the traveler’s arrival, paying homage to his friend, to his departure: a gesture of eternal farewell or a eulogy.

Rhythmically, the piece lacks in dynamics: not only does it favor a monotone as its temporal architecture, it also creates the ambiance of stillness through movement. This effect is mostly the result of the selection and the layout of the chosen poems (arranged by Hermanis), all focused on the metaphor of death as stillness.

Baryshnikov’s stage presence is enchanting, however. In his 70s, his movements are still as graceful, delicate, sharp, accurate, strong, and spellbinding as ever. In a play about memory and aging, in which every move is called to be an echo of itself, Baryshnikov’s somewhat twilight choreography is spot on. The sequence on death, staged to bring in motion Brodsky’s 1962 poem, The Black Horse, about death seeking its rider, is one of the strongest. Baryshnikov paints his torso with the white strokes suggestive of a human skeleton and begins his dance macabre, using distorted and grotesque gestures, coming in their uncanny ugliness from the expressionist paintings. In the sequence about tragedy, Baryshnikov performs a series of balancing acts, using a chair. Switching from one shaky position to the next, he exhibits a fascinating control of his body and spirit, as the distorted face of tragedy comes alive onstage.

However, in this play Baryshnikov is not just a dancer but also a performer of truly versatile abilities: he recites Brodsky’s poetry masterfully. Not only do we hear traces of meticulous analysis of Brodsky’s strophes, we also enjoy Baryshnikov’s intuition for the complex cadence that defines their rhythmical designs. It is a known fact that Brodsky composed his poetry as music, the intention best recognized in his own recitations that remind one of the chants of a Jewish cantor. Baryshnikov, fully aware of this phenomenon, avoids any overt rhythmicality, over-characterization or heightened emotion that many other performers of Brodsky’s poetry tend to do. Baryshnikov’s recitations are well measured and thoughtful, they testify to the dancer’s deep love and understanding of this material. His performance is also highly personal. Not only were these two Russian exiles close friends, Brodsky was also a keen listener to the way Baryshnikov handled his verse. The sense of rhythm and the dynamics of movement are the imperatives of how a dancer feels the world around him. It comes as no surprise then how gracefully and easily Baryshnikov navigates the gloomy and often stormy waters of Brodsky’s poetry.

Twice we hear the voice of the poet himself, reciting what we would call Brodsky’s signature poems: the poem on exile (May 24, 1980) and the poem on death (Nature Mort).

His voice reaches us from the past. In the show about aging, dying, and dust, this moment creates a sense of uncanny recognition of one’s mortality. Similarly to reading a philosophical essay or listening to a religious ceremony, Brodsky/Baryshnikov offers its spectators a chance of encounter with oneself. It provides us with a moment of stillness and invites a deep reflection about the most important dichotomies of our existence: life and death, stillness and motion, light and darkness, memory and imagination, water and dust…all this thanks to the effect of words coming alive through motion….

Brodsky/Baryshnikov (2015)
A co-production of The New Riga Theatre and Baryshnikov Productions
Directed by Alvis Hermanis
Based on the poems of Joseph Brodsky
The English-language surtitles by Jamey Gambrell
With Mikhail Baryshnikov
Set design by Kristine Jurjane
Lighting by Gleb Filshtinsky
Sound by Olegs Novilovs and Gatis Builis
Music by Jim Wilson and Karlis Tone
In Toronto: Winter Garden Theatre, January 24-28, 2018
Produced by Show One Productions in association with the Luminato Festival.

This article originally appeared in Capital Critics’ Circle on February 1, 2018, and has been reposted with permission.