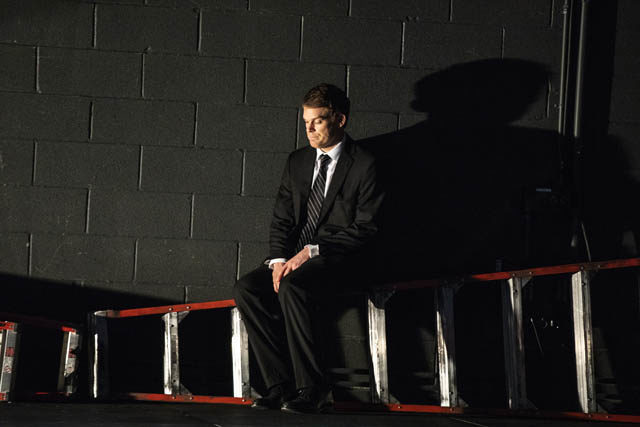 “So, a horse walks into a bar. The bartender says, ‘Why the long face?’ And the horse says, ‘I’m dying of AIDS. And I guess I feel a little sorry for myself.’ So the bartender says, ‘My God, that’s awful. I’m so sorry.’” Will Eno, Thom Pain

Three years ago, the cultural critic Lee Siegel wrote a perceptive op-ed arguing that we were now living in the age of “the unfunny joke.” His examples were pretty convincing, and I thought back on them after watching Oliver Butler’s sharp production of Will Eno’s extraordinarily peculiar 2004 play Thom Pain (Based On Nothing), its first major New York revival.

Seeing Thom Pain again made me reflect that before there was Tig Notaro removing her shirt in a 2015 standup act to reveal scars from her double mastectomy (Siegel’s prime example)…before there was Amy Schumer salting TV sketches with jarringly sober lines about rape, abortion, and 9/11…before there was Jimmy Kimmel using his normally comic talk show monologue to discuss the open-heart surgery of his newborn son in 2017 and blast Republicans for trying to repeal the ACA…before the whole genre of standup seemed to implode under the pressure of Trump’s absurd presidency, with dead-serious screeds of all sorts now sugarcoated as bighearted shtick…there was Will Eno.

Eno, obviously, didn’t invent the unfunny joke any more than these others did. Charles Isherwood pointed to a few other precedents in his infamous over-the-top New York Times rave about Thom Pain’s 2005 American premiere, when he called Eno “a Samuel Beckett for the Jon Stewart generation.” Albee should get a shout-out too. Yet Thom Pain did do something weirdly original. It concentrated unfunny humor into a uniquely sassy avant-gardist bomb, a drama so ostentatiously fizzled and vainly impudent that it ended up feeling tight.

The way Eno composed this aggressive, digressive, perplexingly freewheeling monologue felt breathtakingly fearless and snotty in 2005. The title character compulsively tells and shortcircuits stories, directly engages the audience and then insults them, invents characters we suspect are versions of himself and then loses interest in them. Thom Pain even dares its audience to walk out (it includes one planted walkout). It plays Pain’s impatience, disdain, and self-hatred off against our curiosity (weak as it may be) about why he’s so pissed off and what his decidedly murky suffering might have to do with us. Watching it is like sitting up all night with a bad, thankless friend in crisis. You know you’ve done the right thing, but the reward is sour, delayed, and uncertain.

James Urbaniak was excellent in the role thirteen years ago. A lithe, wickedly droll, intensely focused performer whose volubility tends to read as frustrated intellectualism, he made Pain come alive as a magnificent comic patchwork. Now sarcastic, now doubtful, now treacherous, now silly, now chatty, now reserved, he was a loose cannon who didn’t seem to believe anything he said, so every section of the play came off as a different virtuosic “act” polished to look accidental.

Michael C. Hall’s Pain in Butler’s production is quite different. This character is also a charming, captious prick and a volatile, sardonic backslider but he doesn’t feel like a shapeshifter. He’s all of one capricious piece standing there so handsome in his natty black suit. His unreliability is skin-deep. The monologue is as mercurial as ever, but Hall seems motivated, fundamentally, by heartbreak over the lost love affair Pain keeps describing, fitfully, always with an edge of special sincerity—that is, when he isn’t digressing about whether he’s used too many words, or commas, or flirting with a woman in the front row.

Hall excels at characters with something important to hide: Dexter the forensic techie who happens to be a serial killer; David Fisher the upright and respectable Six Feet Under funeral director who happens to be a closeted gay. He has a knack for effortlessly inhabiting multiple personalities as a single burden, making fascinating complications seem like coherent syndromes. This is what makes him the perfect Eno performer. (He was hilarious in Eno’s The Realistic Joneses in 2014 on Broadway.)

When Thom Pain first appeared, Eno was all but unknown. By now we’ve seen more than a dozen other plays, so we know much more about his tendencies, obsessions, and techniques. The way Pain flits from the mundane to the cosmic and back, for instance, all within a phrase or two, turns out to be typical of Eno’s people.

“It’s sad, isn’t it? The dead horse of a life we beat, all the wilder, all the harder the deader it gets. On the other hand, there are some nice shops in the area.”

The same is true of Pain’s schizy toggling between viciousness and warmth, lightheartedness and black withdrawal, as well as his anomalous preoccupation with obscure minutiae of language as if word problems and metaphysical problems were indistinguishable. Pain:

“From the New Century Dictionary Of English (Rustling of paper, in the dark.): Quote, ‘Fear:

Hall’s distinction is the way he makes quirks like these seem integrated and necessary rather than outrageous and foreign to us.

All of this understood, I must admit that, much as I admire Thom Pain, I’m not sure that the curdled, heartsick anger at its core is the best elixir for this moment when so many of us feel bludgeoned by the naked aggression emanating from our dear leader. I can well imagine even people who like the play feeling that the character of Pain is just too much of a toxic male to listen to right now. Butler and Hall have done peerless work. You just can’t help wondering how much that can matter if the average raw-nerved spectator heeds the advice of the title character and ends up checking out.

This article first appeared in Jonathan Kalb on November 11, 2018, and has been reposted with permission.