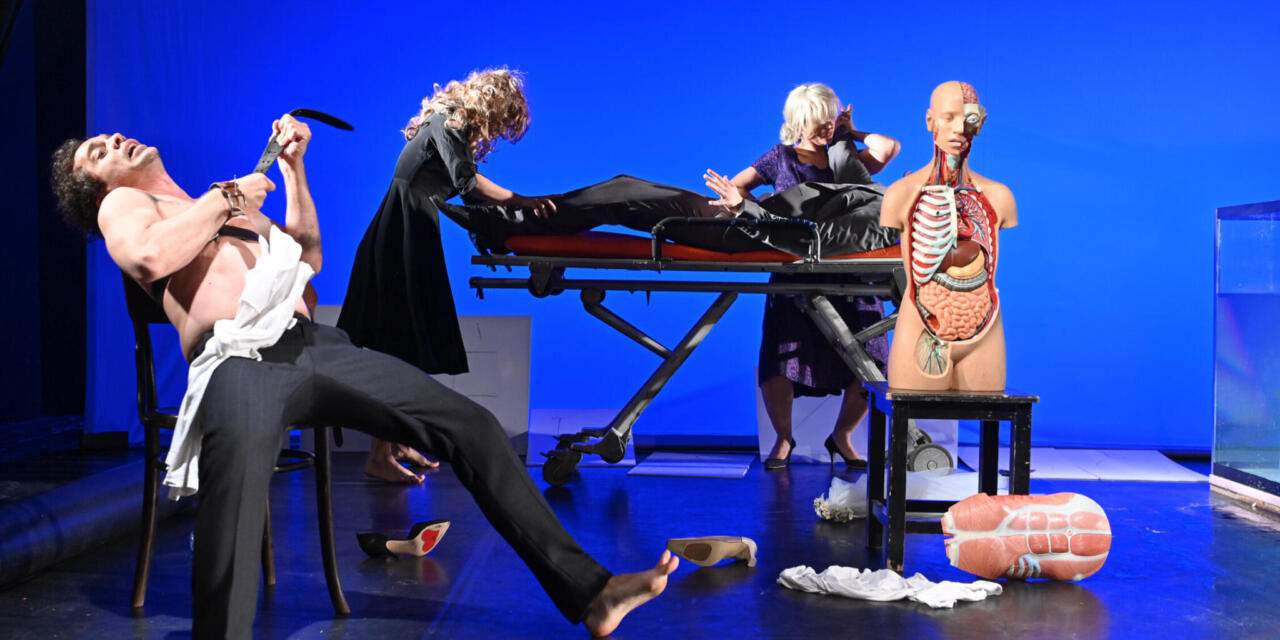 "When God Kicks You In The Womb." Press photo.

Performance “When God Kicks You In The Womb”, based on the novel by Ildiko Lovaš, is a play by Hungarian actors that live and work in Serbia and its theatres. Andraš Urban, an authentic, provocative and explosive theatre director whose directing is an event throughout the region and Europe, presented this time again incredible artistic and theatrical “acrobatics” by combining the actors and energies of the Novi Sad’s Theater/Újvidéki Színház and the Subotica’s Deže Kostolanji Theater/Kosztolányi Dezső Színház. Latest Urban’s theatre directing, “When God Kicks You in the Womb”, is one of the author’s most gentle and pure creations because it shows the human interior, twists the inside of the human body and soul, exposes the mental sphere and openly displays the grey, fibrous brain mass, shows the most hidden emotional abysses and the deepest (and highest) levels of the spirit on the theatre floor. All of that is transmitted to faithful theatre viewers, lovers and admirers of this kind.

The writings of Urban’s work, quality and sensibility, expression and intelligence, are recognizable even in his latest innovation. The scenes from the asylum for the mentally ill and the psychiatric hospital, which talk about tomorrow’s freedom, are reminiscent of the director’s famous play “Marat/Sade“. The dissection of the writer and his biological (physical), psychological as well as creative structure corresponds with the crucifixion of Danilo Kiš in “Anatomy Lesson”, where Urban distorted hypocrisy, social kitsch, contestation and admiration of the artist’s work. The street market smells of tomato juices (blood stains) bring back memories of “Capital”. The beginning and the end of human life and the entire world are similar to the “Poetics of Seeing”. The live and extreme music is performed in “Hasanaginica” and the play “Ibi The Great”, as in this last one. But now everything is different, I would say much better. More honest, more natural, more radiant. Completely mature and confident. No provocations. The story tells a story for itself. It is sublime, and that sublime has long since surpassed the beautiful.

One of the spaces and places of the depth of this play is the city of Subotica itself. The writer Deže Kostolanji, from Subotica, after whom the city theatre got its name, wrote: “The one who grows up here has wider eyes than those who experience the baptism of life in a wisely arranged capital. The mystery in the Hungarian province, the mysticism that hides in the man from the palanka, pushed me to write. I only feel like a writer to the extent that I got strength from the force that works in the province”. There was another writer at the same time, a relative of Kostolanji, born in Subotica as Jožef Brenner. That creator, playwriter, painter, and musician also received a statue in his hometown. He worked under the pseudonym Geza Chat and is the main character in the play, with double and triple personalities (played by three actors Boris Kučov, Gabor Mesaroš and Robert Ožvar). He is a multifaceted artist and a great sufferer, a doctor who is a patient, at the same time wearing a white coat and a straitjacket. Ildiko Lovaš’s novel, followed by Andraš Urban directorship through the play, layer by layer, reveals the true, painful and shocking fate of this controversial medical scientist and artist. They are directing us to his scientific studies, notes, drawings, paintings, and books, especially to the pages of the diary of Geza Chat (which opens up a deeper hidden diary), but also making references to films inspired by the life and work of this personality (like the film “Opium – Diary of a Madwoman”, directed by János Szász, Hungary, 2007).

In his story, before his name is known, he is seen through the eyes of three women: his mother (played by Timea Filep), who could not take it anymore, then his wife (fantastically played by Gabriela Crnković), whom he never even loved and at the end his daughter for whom he didn’t even exist for half his life (such a young woman is played by Andrea Verebeš, the one who will be mowed down by the publication of her father’s diaries, to which her father was returned and then denied again; the mature, old one will be played by Livia Banka). Actors will take on other functions and roles in an Urban’s manner, at one scene; there will be numerous Brenner relatives in an incredible stage movement.

By uncovering Chat’s diaries, a name is born. Geza Chat is made out of mud. A monument was erected to him in Subotica, commemoration, and this performance brings back memories of the real life of that man and artist, a lucid genius and a madman.

Jožef Brenner, that artist under the pseudonym Geza Chat, without maternal attention and love, that devotee of opiates and morphia, married to Olga (a Jewess, unwanted by her family, unloved by him), is a doctor but a patient, an escapee from a mental hospital, the woman killer, then a suicide killer, that relative of the famous Deže. That is an example of existential psychoanalysis. A loner, longing for touch. The “rebellious bird” of love. Two or more faces. A versatile sinner, like any other real great artist, who awaits his death because then he becomes what he really is. That disappearance is the moment when he begins to exist. A new emergence of identity. A statue.

The beginning of life, its continuance and realization, fruition and death, everything in the play is from the inside. The multitude of monologues is the voices in the head that continuously resound from off-stage. On the stage, the viewer sees impressive non-verbal acting of the actors through whom we recognize the sequences of the artist’s work. The poetics of the bizarre and brutal, psychologically explicit, terrible, and mystical left viewers speechless. Vigorous and vibrant red and blue background colours and shadow play. The chamber orchestra professional music band consisting of double bass, tambourine, two pianos, accordion, and drums, perform a different type of Carmen. “When will I love you? Good God, I don’t know, maybe never, maybe tomorrow, but certainly not today,” gets an entirely different meaning in this Urban’s “Habanera.” A cage, a hospital bed, an aquarium, a skeleton, a medical doll… are just some of the props of the dystopian scenography that the director himself designed. Life is depicted from the mother’s womb to the skeleton, from the newborn to the tomb, mummy and the memorial statue. Bloody paradise fruit and brains glued to heads. Urban’s thoughtful direction leads through living images to the writer’s diaries (“Diary of a morphinist”), from them to another diary and the fantastic world of a mentally ill woman (Miss G.), from it to Brenner’s psychiatric manual ( “Psychic Mechanism of Mental Illnesses”). Then the novellas (“Opium”) and the theatrically revived drawings and paintings of the author, who is always in the border zones and goes to the extreme limits of his endurance. Naked bodies and red lipstick kisses. That equally exposes his genius but also the author’s fears, perversions and demons, with which the director achieves an even stronger impression on the audience.

Following Urban’s inclination toward the philosophy of existentialism, this play is reminiscent of the elegiac Sartre, where being in itself is identical, immobile, filled and extended while being for itself is the man because he is the only one who has consciousness. “Nothingness comes to man’s consciousness,” says Sartre. Being in itself is destroyed, and man is free.

Of all things seen, the most terrible is that which is permanent, realistic, everything. Because theatre is a reflection of reality. “When God Kicks You In The Womb, a child is born. An artist who is both an angel and a dwarf.” Without any error of the Lord. One man, two characters. It is the same with theatre and life. One reality, two views, forms.

“When God Kicks You In The Womb”, you are born after you die.