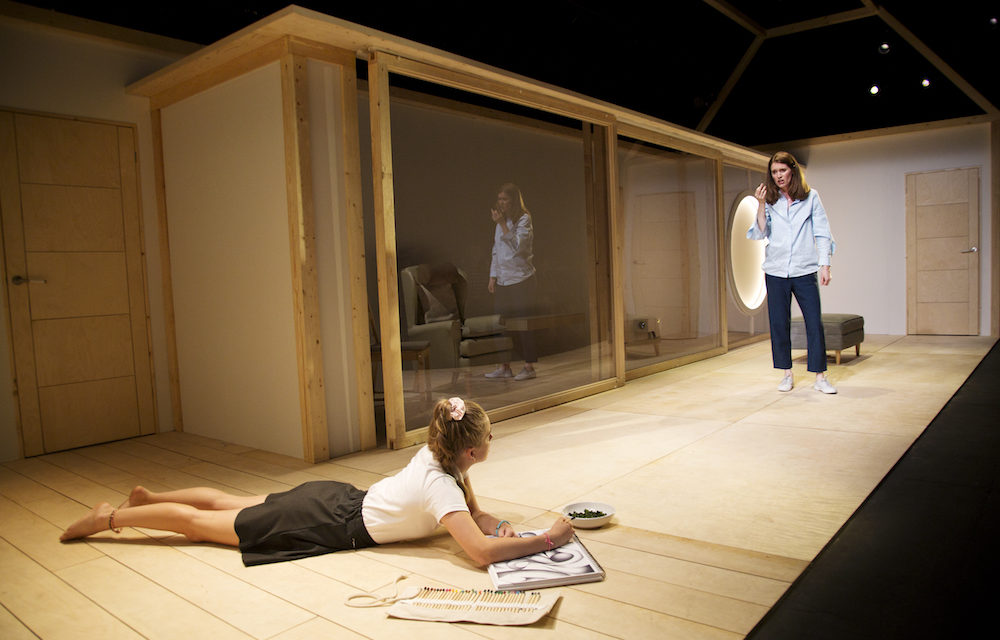 Surrogacy is an emotionally fraught subject. And one that is pregnant with meaning. The arrangement by which one woman gives birth to another’s baby challenges traditional notions of motherhood and pitches the anguish of the woman who can’t have children herself against the agony of another woman who gives up her child. Vivienne Franzmann’s aptly titled Bodies explores what happens when Clem, a British television producer, and her husband Josh, use a Russian woman’s egg (fertilized by his sperm) and implant it in the womb of an Indian woman. No prizes for guessing that the result is a tale of torment.

Although Clem and Josh occupy a highly privileged social position, which allows them to spend some £22,000 to pay the village-woman Lakshmi to carry their child, they are not without their own misfortunes. For a start, the baby has no genetic connection to Clem, its new mother, and she has other problems in the shape of her father, David, an old socialist in his 70s who is suffering from motor neuron disease. His new career, Oni, is soon closer to him than his own daughter and conflicts between them arise when he makes a political criticism of Clem’s use of money to buy herself a child.

But the most daring gesture of a play that brims with powerful emotions and interesting ideas is Franzmann’s decision to create fantasy sequences in which Clem talks to the perfect daughter that she imagines she will soon have. Sourcing the egg from Russia means that the couple has chosen a tall blonde girl with no genetic connection to the woman who has carried her for nine months. In fact, only gradually is Lakshmi’s situation, her lack of legal rights and her terrible pain, revealed. As usual, this kind of financial transaction seems to be dehumanizing, in a very human way, to everybody concerned. There are no winners.

Except perhaps the fantasy figure of Clem’s daughter, whose physical perfection is shown at the age of 16 and whose intelligence and charm are a compelling projection of her mother’s dreams and wishes. Their exchanges, one of which begins the play with a discussion about kale crisps, are lightly humorous and thoroughly middle-class. But even these develop rapidly into inevitable conflict: as Clem rightly perceives, how and when do you explain to a surrogate child exactly where they come from (genetically) and how does that affect them (emotionally)? What will they think of the woman they call mum, and of the woman who bore them?

But although Franzmann vividly portrays the desperation and distress of Clem’s nine years of trying for a child, as well as Josh’s desire to be a father (and David’s firm disapproval of the whole process), there is something very conservative in her picture of Clem’s feelings. After all, there are plenty of women who do not define themselves by their ability to conceive children, and who don’t go to pieces every time they see another woman’s babies. Likewise, the story covers very similar ground to that of Satinder Chohan’s equally compelling play, Made in India, which takes a much more Indian perspective.

At the same time, although Bodies effectively explores the ethics of surrogacy, it tends to downplay the politics of the international trade in fertility in favor of the emotional persuasiveness of Clem’s vulnerability. Her sense of loss, and the crisis of identity. We are meant to feel so much for her that we forget what she knows so well: this is an unjust transaction. When she goes ahead regardless, she, and then we, fall back on convenient middle-class guilt. So although the play, with its video images and strong speeches, ends with Lakshmi’s accusatory stare at the audience, perhaps we are all being let off a touch too lightly.

Still, Jude Christian’s production radiates empathy and explores all the angles of this surrogacy. David’s love of aviary birds, and Clem’s job as a producer of medical documentaries provide a series of powerful metaphors, and these are conveyed economically and strongly. Designer Gabriella Slade’s muted beige and pine set suggests all the comforts of upper-middle-class domesticity, and the cast is uniformly excellent. Justine Mitchell’s Clem travels convincingly from amusing day-dreaming to confrontation with the realities of neo-colonial exploitation. On press night, Jonathan McGuinness gamely took the role of Josh at short notice due to another actor’s illness. He is great, and so are Philip Goldacre (David), Lorna Brown (Oni), Salma Hoque (Lakshmi) and Hannah Rae (Daughter). If you can ignore its rather muted political rage (David’s voice symbolically disappears), Bodies is a treat for mind and emotions alike.

This post was reposted with permission from Aleks Sierz on July 12th 2017.